A dodo with pedals

From time to time I suddenly remember the dodo with pedals, a weirdly vivid memory dating back to a time from which few memories survive.

I can't be sure how old I was at the time, but I was living in New Hampshire and had not yet started kindergarten, so somewhere in the two-to-four range. My little sister and I were drawing pictures in crayon to send to "Auntie Lane" (whose proper name, I was later to find out, was actually Aunt Elaine).

"What should we draw next, Chris?"

A sudden inspiration: "Let's draw a dodo with pedals!"

So I drew just that: a dodo bird with a pair of bicycle pedals instead of legs. Somehow I had gotten the idea that a dodo's beak pretty much looked like the mouth of a trumpet, flaring out and ending in a big circular opening. All my information about dodos came from a picture book based on Disney's Alice in Wonderland cartoon, and dodos were also connected in my mind with a picture I had seen of Donald Duck somehow puckering his beak to blow out a candle. (I always said "beak," never "bill," even referring to hadrosaurs as "duck-beaked dinosaurs.")

(Looking up the Disney dodo now, I see that, yes, the dark bit at the end of its beak could easily be mistaken for an opening. It also has a normal mouth underneath its apparent trumpet-mouth, but I'm pretty sure my drawing had a trumpet only, with no articulated jaw.) 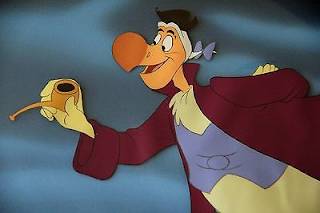 Looking over at Chris's picture, I saw that she had completely misunderstood my idea and had drawn her dodo with petals. Girls!
at March 08, 2019 3 comments:

Email ThisBlogThis!Share to TwitterShare to FacebookShare to Pinterest
Labels: A little nonsense now and then, Childhood, Dodo with a twist, Errors
Newer Posts Home
Subscribe to: Posts (Atom)