From the Resurrection to Kolob

Behold my hands and feet, that it is I myself: handle me, and see; for a spirit hath not flesh and bones, as ye see me have.

Rabbi, where dwellest thou?


One of the most universally ridiculed of Mormon beliefs is the idea that -- rather than existing outside of space and time, in a metaphorical "place" only metaphorically called "heaven" -- God in fact lives on a physical planet in the physical universe, near a distant star known as Kolob. For many, this is a belief which cannot possibly be taken seriously, and which justifies classifying Mormonism as a transparently bogus sci-fi religion along the lines of Raëlism or Scientology.

However, I think Kolob, or something like it, follows naturally from the Christian doctrine of the Resurrection. Here's my line of reasoning.

1. Jesus was resurrected, permanently, in a physical body. People rarely stop to think about what this implies, but if they do, they will realize that, as Bruce Charlton has pointed out in a recent post (qv), "Resurrection, not incarnation, is the most shocking and strange thing about Christianity." That God assumed human for for a time, lived as a man, and then ascended back to heaven after his human body had died -- there's nothing very strange about that in the context of world religion and mythology. The really strange claim is that, with the Resurrection, Jesus assumed human form permanently. He didn't appear briefly as a man (much as he had appeared briefly as a burning bush to Moses) and then resume his true nature as a purely non-physical spirit; no, the Resurrection means that Christ is a man, now and forever -- that his divine spirit is now inseparably associated with the flesh-and-bone body of a terrestrial primate.

2. A physical body necessarily has a physical location. While he may be "everywhere" or "in our hearts" in terms of his spiritual influence, Jesus the man must nevertheless be in one particular place at any given time.

3. Given that, it seems reasonable to assume that Jesus habitually stays in a particular area -- that he lives somewhere.

4. Jesus no longer lives on Earth. After a brief stay in Palestine following his Resurrection, he ascended to "the sky" -- taking his human body with him. Wherever he went, it must have been a physical place.

5. Since Jesus obviously hasn't been floating around in Earth's atmosphere for the past 2,000 years, "the sky" means outer space -- taken in the broad sense, in which extraterrestrials come from "space" just as Westerners are said in Chinese to come from "the sea."

6. While I suppose an immortal resurrected body could theoretically live on one of the uninhabitable planets of our own solar system, or in the Sun, or even in the near-vacuum of deep space, without suffering any harm -- it seems most natural that someone with a human body would prefer to live in the sort of environment to which such a body is adapted -- namely, an Earth-like one. We can therefore assume that the resurrected Christ lives on an Earth-like exoplanet. A planet must orbit a star -- and this, to end in the style of a Thomistic proof of God, is what all men call Kolob.

7. What we have said of Christ holds also for God the Father. Jesus would not have chosen to resurrect unless having a resurrected body were better than being a pure spirit, so the Father (aliquid quo nihil maius cogitari possit) can be assumed to have a body as well and to live somewhere in the physical universe. Since Jesus spoke of ascending to the Father and is described as being in the bosom of the Father, we can assume that they live in the same place.

I am well aware that it will still be hard for many people (including, in certain moods, myself) to take Kolob seriously -- but, really, what are the alternatives?
at September 19, 2019 6 comments:

A platform to express complex emotions

A little wink from a synchronicity fairies:

I'm teaching my afternoon class, made up of high school students who are preparing to take the TOEFL. In the morning I taught a group of little kids, and a few of them are still downstairs waiting for their parents to show up. One of the exercises we're practicing today involves listening to an excerpt from a university lecture and then summarizing it orally. I play the excerpt we're using today, which begins thus:


OK, young children and art. Research suggests that learning art skills can benefit a young child's development. Two of the ways it can do this is by providing a platform to express complex emotions and by encouraging persistence. Now what do mean when I say "a platform to express complex emotions"? Young children have limited vocabulary, so how would they communicate the feeling of pride, for example? A drawing, though, making a drawing of feeling proud, this is something a young child could do. . . .

After the class I go downstairs and find that while the older students were listening to the lecture, one of the little kids was drawing this on the whiteboard in the lobby: 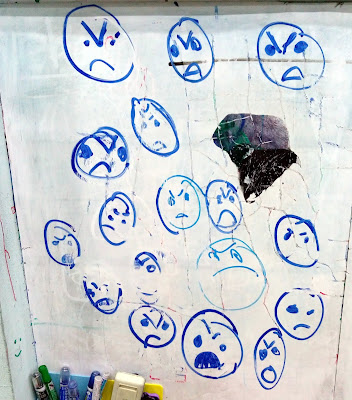 Email ThisBlogThis!Share to TwitterShare to FacebookShare to Pinterest
Labels: The highway is for gamblers
Newer Posts Older Posts Home
Subscribe to: Posts (Atom)