Greek Orthodox Archimandrite Fr. Savvas Agioritis on the demonic nature of the peck 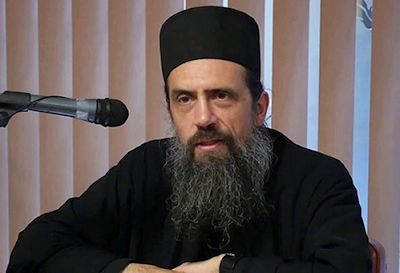 Following up on the idea that the pecked are no longer alone in their bodies, reader Ben Pratt has brought to my attention these remarks by a Greek Orthodox hieromonk. For those who understand modern Greek, the original audio (with English subtitles) is available here. My transcript follows (from the subtitles, edited slightly in the usual fashion, probably with plenty of tpyos), with a few remarks of my own at the end.

To this I add my own testimony that the Holy Ghost and my own intuition have made it abundantly clear to me that I am not even to think about submitting to the peck, and that, while the biological harm is certainly very real, the primary danger is spiritual.
As for the details, obviously anything that demons say should be taken with more than a grain of salt. Fr. Savvas focuses on the use of aborted fetuses in the development of the pecks; but my own sense is that this, while clearly abhorrent, is not the central issue, that the connection to evil is much more direct and fundamental, though I cannot yet articulate it clearly.
Most importantly, the demon's claim that those who take the peck will be unable to repent is very clearly a lie, as illustrated by the account of the hieromonk who took the peck and repented. Repentance is always possible, and the contrary doctrine is a Satanic lie, designed to induce despair and convince you that you "might as well have fun / 'cause your happiness is done / and your goose is cooked." I have obviously not taken the peck myself, but I have committed sins of equal gravity, and I have repented. There is always a way back.
If you have been snookered into letting them inject that garbage into you, do what the hieromonk did. Confess, repent, and don't take any more doses. Don't think that you're already pecked and so to stand on principle now would be meaningless. Standing on principle is never meaningless.
Multitudes, multitudes in the valley of decision! For the day of the Lord is near in the valley of decision.
at September 19, 2021

Thanks for posting this, Wm. I feel the truth of it profoundly, both the evil of the peck and your very important point that repentance is always possible.

Encouraging piece, overall; not least the spiritual power of the author. This was clear and crisp:

"In NO case can a person call himself a Christian if he fears death. When a person is afraid to die, he becomes an idolater or an atheist."

This is a sharp and necessary reminder.

The sentences which follow are: " a Christian should long to die. The saints wanted to die."

I would have to regard this idea of 'wanting' to die as a distortion deriving from Platonic philosophy, rather than being essentially Christian; a distortion to which the Orthodox are prone because their theology does not have any clear *positive* idea of what is supposed to be accomplished in this life - especially among those who live many decades.

(Avoiding and repenting sin/ damnation is a double negative, not a positive.)

If life is 'a school' (as I believe) - then so long as we are alive we have something spiritual to accomplish that is the reason why we are being sustained; therefore we should not 'want' to die 'now' - but should try to discover what needs to be learned, and learn it.

Agreed, Bruce. A Christian should want to die in the same sense that a student wants to graduate — which does not mean wanting to graduate *now*, when there is still more to learn. Suicide is dropping out of school.

Thank you for posting on this. What an insight into the evil. I'm still taking it in despite reading it twice.

I also don't think the murdered babies are the key to this, especially since there are dozens of other 'medicines' and products which make use of similar techniques (Pepsi comes to mind). It doesn't make the point insignificant, of course, it adds to the demonic nature, but I don't think it is the key.

Since last year I have been thinking of the implications of the 'gene therapy' angle and it occurred to me it has to do with 'ferality' and how genetic manipulation stops this God-ordained process.

Feral doesn't mean simply something wild, but specifically something that has been returned to the wild after domestication, and that has adapted to its new wild environment. In the process, which can be longer or shorter depending on the amount of domestication, these forms of life lose its domesticated features and regain its wild, original (God given) features. This happens with all forms of life that we have domesticated, even to the most 'sophisticated' or 'advanced' - such as mammals (everyone has heard of feral dogs and feral cats, but this is only the tip of the iceberg). If survival is achieved after returning to natural conditions, which depends a lot on environment, then those organisms will start a journey back to 'original forms' and 'original potential'. Even plant hybrids, when they can reproduce, will 'choose' one of the parents, and return to its lineage and its characteristics. I have seen it happen in tomatoes.

There is only one way to block this process: genetic manipulation in a laboratory. A genetically modified crop (and it's reasonable to suppose that animals as well) will not, even if naturally reproduced, return to its original state. More often than not, however, they are too weak to naturally reproduce anyway or specifically designed to be sterile.

Humans, like all other things created by God, have a specific nature. And to me one of the ways to describe modern society is precisely as a wide-scale domestication project. But this domestication can be reversed and is reversed everytime we consciously choose to do Good when it goes against what society expects, which is usually evil. We can still in other words return to our God-given nature, we just have to will it. This suggests to me that the purpose of the peck and the gene therapy component is to make this process impossible, just like it makes in other life forms. I am not saying btw that the material component is the key, but that the material and spiritual component are interlinked just as they are in everything, hence the idea that the Will is impaired by accepting the peck.

This is of course only speculation, but it seems to tie the material and spiritual in its various aspects.

Excellent- thank you.
Orthodox Father Peter Heers has this clear and concise summary of why the shot is evil: https://youtu.be/_9n3sU_rHJA

Also, this injection uses technology patented by the companies that manufacture it, giving them legal control over it even if it exists in a person’s body.

Of course the connection to abortion is the KEY.

Humans are material and spiritual beings who will exist forever, either in heaven or hell.

One needn’t necessarily be Christian to agree with the gist of what Fr Savvas is saying. I’m not, and I do. The drive to push for universal mandatory vaccination strikes me as malevolent in the last degree: and the compulsion to inflict it on children I view as positively demonic. As he says, the internet has become the playground of fiends, from which any truth is systematically expunged as soon as it appears, notably on the major social media; also, what was once the news media, where facts were frequently reported, has become simply a fountain of lies. One may now fairly call these entities the censorship industry and the mendacity industry, respectively.

This is spiritual warfare, and an attack on the fundamental integrity of humankind worldwide. People I’ve known for decades, and whom I always considered reasonable thinking persons, have come out for totalitarianism in a way that horrifies me. It is as though they have drunk the Jim Jones Kool-Aid and joined the cult. This is the worst time I have ever experienced, and I suspect that what is happening could easily develop into the worst crime ever against humanity. I feel a duty to combat it.

Recognizing the reality of purposive evil is a first step. Think a little more about the ramifications of that, and see if you don’t end up a Christian in the end!

We need to pray for these people who have been vaccinated. Pray that their bodies, minds, and spirits will be purified. If any of you pray the rosary, pray for their purification. If any of you go to mass, offer the mass to those people who have been vaccinated even if they don't go to mass or pray. Offer up any sacrifices you make to God for these people in hopes that they will be saved.

This vaccine has been prophesied many years ago https://fatherofloveandmercy.wordpress.com/2012/10/13/then-there-will-be-the-introduction-of-a-global-vaccination-which-will-kill-you-if-you-accept-it/

According to this post, many very common medicines (Tylenol, Pepto Bismol, Aspirin, Ibuprofen, Benadryl, Claritin) were developed using fetal cells. If that's even partly true (I'm calling BS on aspirin at least, which was invented in 1897), then virtually everyone ought to have the devil inside them "in the blood of the aborted fetuses," and the birdemic pecks would not be anything special in that regard.

Gunner Q argues that the primary evil of the peck is that it is a lie, and is built on lies: "Don’t overthink the matter. God told us to shun lies and oppose liars. THAT is why you are refusing the not-a-vaccine, O Man of God. You do not deal in lies. Keep it simple."

Only to comment @ Bruce
The positive goal of orthodoxy is theosis. However, the process is apophatic.

I just had a thought.

7 pecks where the plan seems to be to administer them every six months is 3.5 years, i.e., a time, two times, and half a time.

I'm not sure to what extent the specific numbers are literal or symbolically suggestive, but this is interesting.

I needed the clarity it contains - not simply because the corporate stooges today said "get a not-vaxx exemption, get the peck, or get out", but more importantly, because I need to go and pray for the courage to seek and then do what the Lord wants me to do.

His will, not mine, shall be done.