Religious physiognomy according to Artflow

Artflow is an AI that creates portraits from text descriptions, and I thought it would be interesting to see how it depicted men and women of various religions. 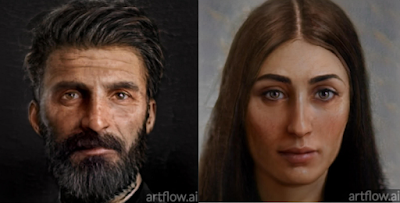 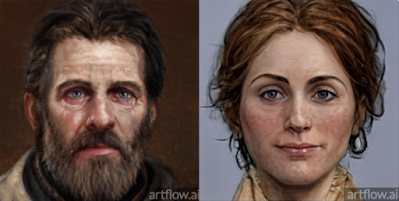 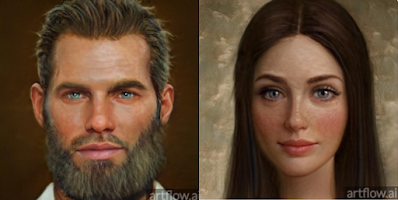 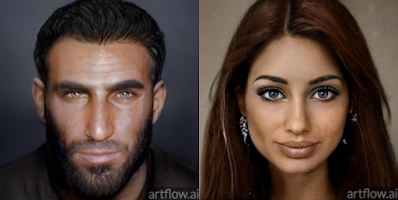 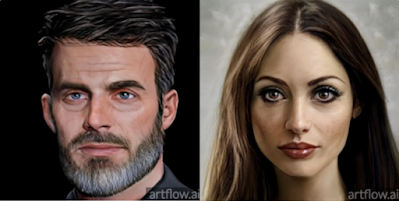 Sorry, the people who run Artflow think there is something inherently "inappropriate" about pictures of Jewish people, and they refuse to let their AI draw them. I guess that makes sense; wouldn't want to offend!

⁂
Note added:
As noted in the comments, Artflow is (for some reason!) really sure that all Mormon men wear beards -- which is just about the opposite of the truth.

I can't imagine where the program is getting this, unless it's somehow picking up on all the Bible videos the CJCLDS produces these days. (The second picture above seems to have been influenced by the inclusion of "Jesus Christ" in the description, but that doesn't explain the others.)
It was also mentioned in the comments that Artflow tends to generate haggard-looking men and beautiful young women. Here's what it produced when I gave it my own name and my wife's name. 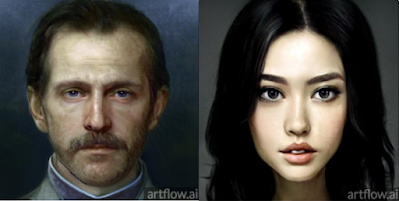 Needless to say, she found the contrast highly amusing -- and to be honest, it does kind of look like a caricature of her. As for my own portrait, all I have to say is that, yes, I do have ancestors who fought on both sides of the Civil War.
at September 09, 2021

Email ThisBlogThis!Share to TwitterShare to FacebookShare to Pinterest
Labels: A little nonsense now and then, Artflow, Censorship, Physiognomy

I can't imagine how this program is supposed to be working! A Mormon with a beard? Well, maybe in 1890...

Beautiful young women and (mostly haggard but probably once handsome) much-older men... It's like a variant of a world as seen in TV adverts.

For some reason, this program just loves beards. Even if you specify "Mormon missionary," it still comes out bearded.

Bruce, what you've described fits my wife and me to a T! (Save for the once handsome part, anyway.)

Interesting. The Mormon and Muslim individuals came out the best looking.

I currently sport a beard, and there are certainly many other Mormons who have facial hair, but it's not something we're known for. I like your guess about Bible video images and photos of previous prophets and apostles possibly being a part of the training set.

The Roman Catholic woman is similar to the style of Roman mosaic portraits.

I was thinking the same thing, NLR -- much more Roman than Catholic.

Its from Mormon Jesus pics. When I search for Jesus images I always search Mormon Jesus because its the only way to weed out blasphemous black fake jesus images.

Curses - the application seems to be offline at this time. I was looking forward to playing around with it. Clearly you guys broke it. Why we can't have nice AI things...

The protestant man looks like he's just tearfully apologised for his existence.

The mormon woman is the cutest.

"The protestant man looks like he's just tearfully apologised for his existence."

I think he took the Total Depravity thing to heart.

"The mormon woman is the cutest."

As early Mormon apostle George A. Smith put it, "We breathe the free air, we have the best looking men and handsomest women."

The atheist man looks like he just got his booster shot and isn't feeling well.