Piracy on the high seas, and Cologne Cathedral

I had two fragmentary dreams about a week ago which have persisted in memory longer than is customary and which have an air of meaningfulness about them. I record them here in case that meaning ever becomes apparent.
⁂
In the first dream, I am with my brother Joseph in a very large bookstore where everything is free. He takes this for granted and says bookstores have always been like that. I have vague memories of patronizing bookstores in the past and shelling out 20 bucks or more per item, but I don't say anything. We go our separate ways to browse, and when our paths cross again he is carrying an armload of dozens of large hardcovers, all of which appear to be about piracy on the high seas. Piracy on the High Seas is actually the title of one of them; I don't see any of the other titles but gather that they are all works of non-fiction dealing with the Golden Age of Piracy. He is also carrying two rolled-up American flags on short, spear-like poles, and I understand that these are also from the bookstore and are considered pirate-related items. I comment, "This is a whole new direction for you, Joseph."
⁂
In the second dream, I am doing some long-distance hiking in a mountainous area. I come to the edge of a cliff, and there below me, its spires just level with my head, is what looks like an enormous Gothic cathedral. For some reason I decide it's probably Cologne Cathedral (although checking pictures now on the Internet, I see that it actually bears a closer resemblance to Canterbury), so when I see a man inside the cathedral, close enough to talk to through a window, I ask him if I'm anywhere near Cologne. I try to ask this in German, but it keeps coming out in Chinese, so in the end I just give up and speak English. Fortunately, he understands. In answer, he causes a map to appear in my head, showing where I am and where Cologne is -- but the map looks like Canada, not Germany. Cologne is around where Edmonton would be on a Canadian map, and my current location is far to the northwest, around where (I think in the dream) Yellowknife should be, though waking I would correct this to Whitehorse. I thank the man for his help, get an azimuth, and start walking to Cologne.
⁂
Regarding possible meanings, the juxtaposition in the first dream of American flags and the name Joseph made me think of the Fake President and his recent remarks about his piratical efforts.

I’m also sending to Congress a comprehensive package of -- that will enhance our underlying effort to accommodate the Fire Nation oligarchs and make sure we take their -- take their ill-begotten gains. Ha, we’re gonna accommodate them!  We’re gonna seize their yachts, their luxury homes, and other ill-begotten gains of Poutine’s kleptoc- -- yeah -- kleptocracy and klep- -- the guys who are the kleptocracies.  Heh heh heh.  But these are bad guys!

Most of the commentary on this has focused on the Fake President's ignorance of the meaning of accommodate and inability to pronounce kleptocracy, but I think the content is much more disturbing than the delivery. This is pretty literally piracy on the high seas. Not only is he talking about robbing random businessmen (who for some reason are called "oligarchs" if they're from the Fire Nation) of their private property; he specifically mentions seizing sailing ships by force. As of 2022, the Stars and Stripes is a pirate flag. A whole new direction!

Another possibility is that the dream is actually about the other kind of piracy. A "bookstore where everything is free" sounds pretty much like the Internet, and helping oneself to free content is sometimes considered "piracy."

About the Cologne Cathedral dream I have no ideas at all. We'll see if any syncs turn up later. One possible connection between the two dreams: It turns out that the cathedral in Edmonton is called St. Joseph's.

⁂
Update: I'm not the only wrongthinker to have made the piracy connection. 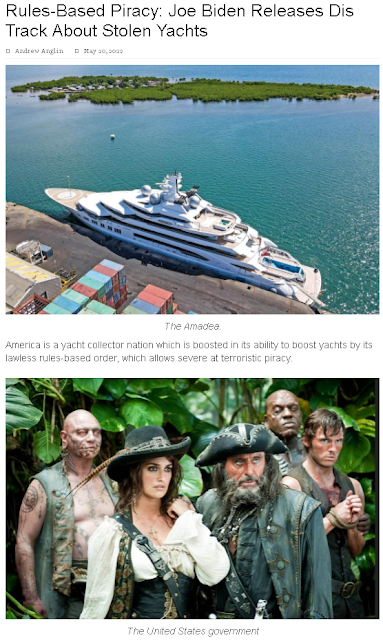 Email ThisBlogThis!Share to TwitterShare to FacebookShare to Pinterest
Labels: Dreams, Everything changed when the Fire Nation attacked, Joe Biden

Biden's "accommodations" aren't the only link between the USG and piracy. The current Chief Justice of the Supreme Court has the same name as the most successful pirate of the Golden Age: Black Bart, born John Roberts, the original "Dread Pirate Roberts."

I had not seen that quote from Fake PB before; and it stimulated two thoughts - in sequence:

Then I thought - but why are they doing this? A plausible answer is that the US rulers assume that Fire Nation rulers are *only* kleptocrat oligarchs - and therefore taking their money and stuff is the worst thing they could experience. Being stripped of wealth and power - being expelled from the globalist Establishment club - these are what members of the US 'elites' *most* fear; and they therefore assume the FN elites *most* fear the same things, and are therefore doing them.

But it seems that one big difference between the US and Fire Nation is that the Fire Nation rulers are Not happy with their country been dismembered, asset-stripped and culturally-annihilated. In other words, at least some FN rulers are genuinely patriotic (which, for Russians, is bound-up with the Orthodox church).

The 'sanctions' and US kleptocracy here display what seems to me a profound lack of understanding of the Fire Nation leadership class. While there are certainly large similarities between the nations, especially when it comes to totalitarian aspirations - they are not identical, and some differences are decisive.

The US leadership apparently simply cannot regard as real things which seem quite normal human motivations to normal people - like religion, patriotism, or Not wanting ones nation and culture to be annihilated.

For The West, the conflict at bottom is only about Ahrimanic - or Sorathic - strategies (corrupted by personal gain) - and the imposition of leftist inverted values everywhere.

But for the FN it is about survival of things they value - a distinctive way of life. This strikes me as a much more powerful and durable motivation over the long-haul.

Very good points, Bruce. This "anti" kleptocracy seems to have a great deal in common with "anti" racism and "anti" fascism. (I've posted before about JB as Robin Hood, with a link via Cary Elwes to the Dread Pirate Roberts.)

The intended effect of all the "sanctions" on Fire Nation citizens -- stealing their property, kicking them out of cat shows, etc. -- was to make them turn against Poutine. They were supposed to think it was VVP's fault they were being persecuted and then betray him -- because that's what US oligarchs would do in a similar situation. In fact, the effect has been precisely the opposite. VVP has never been more popular among his people.

Here's the video of FPB announcing his plans to accommodate the kerploc, the klepop, the -- you know, the thing!

When I first read your post, the very first thing that crossed my mind,
was my recent commentary on your blog about the Maritime Law, International Maritime
Signal Flags ( O for Man Overboard) .. and the Star and its connection to Navigation, especially the connection to Ship's and the Ship's Steering Wheel.

I also found your dream interesting because as I've commented before and predict
that in America I believe that we are at the Rubedo of the American Alchemical Experiment and again if you recall I predicted and believe that there will be a Black Swan Event in America ( highly probable this year )which will catapult Harris into the position of POTUS which in turn I predict will usher in a Triumvirate Governance in America( with Harris, Trump or Pence, and a 'tech' person perhaps Musk, Gates or Bezo's as the Triumvirs, which during the chaos will absolutely feel like a Piracy on the High Seas.

Interesting the connection in your dream to the name Joe?

This was all planned Centuries ago for this time in history at the Shifting of Ages.

Much of this was outside Cologne Cathedral as I recall.