Why is Taiwan's peck lethality changing so much?

Curious as to what had changed, I looked up the relevant statistics and plotted the number of reported deaths per million doses for each of the pecks for two different periods: up to January 17, and from January 18 to May 17. It turns out peck lethality has changed a lot. Overall, peck lethality is about half what it used to be -- 14 deaths per million doses, down from 30. 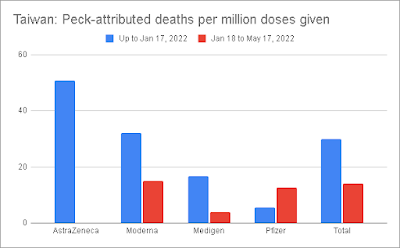 The first thing to notice is that AZ pecks -- the deadliest of the lot, 28% of all doses but responsible for 57% of peck-attributed deaths to date -- have been quietly discontinued. (There were 28 new AZ deaths from January 18 to May 17, but no way to calculate deaths per million doses without dividing by zero.) I didn't know this until I looked up the data to make this chart. It was never announced. I guess they didn't want to admit, after administering 16 million doses to the trusting citizenry and killing more than 800 of them, that they'd made a mistake. They did discontinue it, though, suggesting they've developed some capacity, however limited, for learning from experience.

Eliminating AZ from the mix is only part of the story, though. Every one of the other peck brands has seen a dramatic change in lethality. Mod is killing half as many people as it used to, and Med just a third. What's going on? I can think of a few possibilities.

2. The number of "cases" (positive test results) is much higher than it used to be. Before January 17, about 18,000 people had tested positive. From January 18 to May 17, there were 896,000 positive tests. This is partly because more people are being tested and partly because the definition of "case" has changed. Before, a positive antigen test had to be confirmed by a positive PCR test before it could be considered a "case"; starting this month, though, all positive DIY antigen tests are counted as "cases." People who die of peck side effects after testing positive for the birdemic are presumably counted as birdemic deaths, not peck deaths.

3. The pecks themselves could have changed. I mean, why wouldn't they? Quietly replacing most of the doses with normal saline would seem to be the best way of minimizing deaths without admitting anything.

Then there's the question of the Pfi pecks, which show the opposite trend. While the other brands have dramatically decreased in lethality, Pfi is now more than twice as deadly as it used to be. No idea what to make of that.

@Wm - You have missed the almost certainly true explanation - that the data collection was and is inconsistent, is becoming more and more dishonest, and has changed (and changed) in order to produce the numbers desired for 'today's' propaganda.

It is very likely that the data collection has always been dishonest (this in the 2020s after all!); but had not come under attention at first, until maybe a few people had begun noticing what you did, and a few things (instructions or practices - countless possibilities exist) were changed.

The point is that we Do Not Know, and we can Never know, what is Really going on wrt the birdemic and peck.

That is because to know this requires that all the people involved want to know the reality of the situation. and communicate it. But instead we live in a deliberately and pervasively dishonest world, with people being expedient rather than truthful at every level; and to know what is going on at the large scale of society requires honesty, throughout.

Good point, Bruce. Trying to make any sense out of presumed-dishonest data is an exercise in futility. Garbage in, garbage out.