So my prediction was pretty on the nose

To date, the pecks have killed 78% as many people as the birdemic in Taiwan, and that figure has been increasing steadily at a rate of about three percentage points a week. If present trends continue, it should hit 100% right around October 10 -- a.k.a. Double Tenth Day, the National Day of the Republic of China.

This actually happened on October 6 -- four days early, but do note that my post said "by Double Tenth Day." 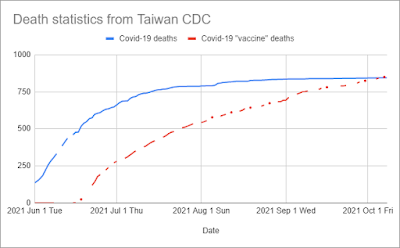 The media and the Ministry of Health have nothing to say about this, because of course they don't.
Another prediction of mine (from July 23) has, happily, failed.

Approximately 24% of the population has received at least one peck, and 478 of them have died of it. That's about 84 per million.
If we assume the pecks will continue to kill 84 out of every million pecked, then pecking 50% of the population should result in about 1,000 deaths, well over the current death toll from the birdemic itself. The actual number of peck deaths will likely be much higher than that, though. The oldest people were pecked first, and many of the young have yet to be pecked -- and we know that "adverse events" including death are much more common in the young than in the old.

And the official deaths r more than likely underreported.