Just how mad can peck madness get?

Here are the latest birdemic peck stats, as reported by Focus Taiwan. 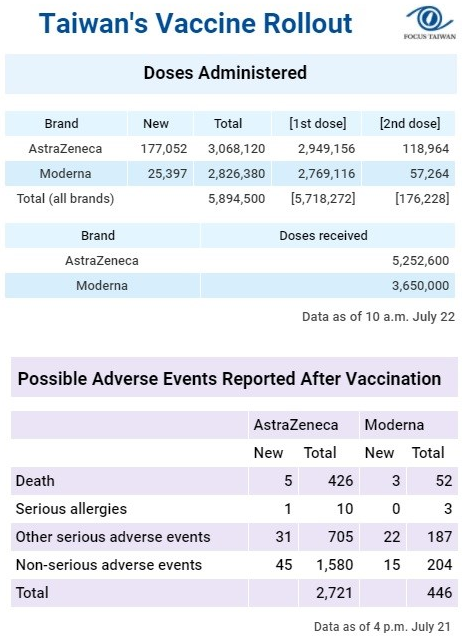 The other key numbers you need to know are that Taiwan has a population of 23.6 million, and a total of 782 birdemic-attributed deaths as of July 22. That's about 33 deaths per million.

Approximately 24% of the population has received at least one peck, and 478 of them have died of it. That's about 84 per million.

If we assume the pecks will continue to kill 84 out of every million pecked, then pecking 50% of the population should result in about 1,000 deaths, well over the current death toll from the birdemic itself. The actual number of peck deaths will likely be much higher than that, though. The oldest people were pecked first, and many of the young have yet to be pecked -- and we know that "adverse events" including death are much more common in the young than in the old. Meanwhile, birdemic deaths are accumulating very slowly, at a rate of about 4 per day, and will not be able to keep up.

Obviously there are a lot of unknown quantities here, but I'm going to stick my neck out and make an absolutely insane prediction which, in this absolutely insane world we live in, just might come true anyway: Taiwan will keep pecking away until, in the very near future, the pecks will have killed more people than the virus they are supposed to be protecting them from. And I can also predict how the government will react to this topsy-turvy state of affairs: by pushing for more pecks!

Nothing will wake these people up -- because, as Bruce Charlton has correctly pointed out, they're not asleep; they're in a stupor.

"They received not the love of the truth, that they might be saved. And for this cause God shall send them strong delusion, that they should believe a lie" (2 Thessalonians 2:10-11).

So AstraZenica is going for the quick kill and Moderna for the delayed kill.

Over half the adult population has been pecked here in Hungary - most with two doses. The government recently announced it would begin to offer a third. We also supposedly have two confirmed Greek letter "D" cases, which inspired the government to ceremoniously announce that the country was now in the beginning stages of the dreaded "fourth wave".