It is being reported that Antipresident Biden used to use the pseudonym Robin Ware. Here's what that name looks like to someone with magical anagram vision.

In my post "Robin Hood," I pointed out various connections between Slow Joe and the legendary outlaw. His middle name is Robinette, for example, and his sons are Beau and Hunter. This link is strengthened by his choosing the name Robin for the purpose of engaging in not-especially-legal activities. The surname he chose, Ware, is an anagram of arwe, the Old English word for "arrow."
The Robin/Robinette connection made me wonder if Bidenette was a name and run an image search on it. For some reason, that search turned up this picture: 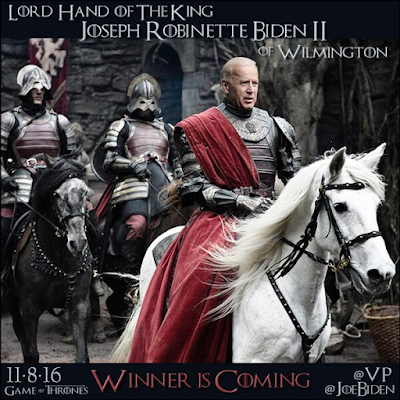 I really don't understand this meme, or why it was tagged "Bidenette." It seems to be predicting a Biden win in the 2016 election, in which he was not a candidate! At any rate, it's obviously a Game of Thrones reference, which makes its similarity to these two pictures a coincidence. 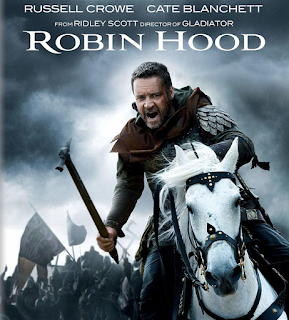 In my original Robin Hood post, I pointed out that the red feather on the Sun card is linked to the legendary Red Crows of the Sun, and that Russell Crowe's name literally means "red crow."
I'm sure that "Hand of the King" reference in the Bidenette meme also has some significance. Last night, between dreaming and waking, the White Hand of Saruman came to mind and seemed to be connected to lots and lots of things in the contemporary world. I can't remember any of the links, though -- if there were ever any real links to begin with; it was a dream. Perhaps something will come back to me.
at July 26, 2021

Email ThisBlogThis!Share to TwitterShare to FacebookShare to Pinterest
Labels: Joe Biden, Robin Hood, The highway is for gamblers

Interesting. I had two strange dreams last night. One was that I was looking out a window, outside of which was a lawn, but for some reason was showing images of a large fountain. Relatively close by was a waterfall and at the bottom of the waterfall were fragments of the fruit of knowledge of good and evil. It was also communicated that there were many fragments in other places as well.

The second was that I was riding in some sort of cart where I could operate it and it got a flat tire. But there was no one nearby who could fix the tire.

I know nothing about Game of Thrones, but I note that one of the books is called A Feast of Crows.