In the sync stream

Composing an email to a family member in America, I mentioned my persistent premonition that Something Big is about to happen and said that I could best sum it up by pinching a chapter title from Herman Melville: “Loomings.” Then I thought to myself that when I think Moby-Dick, I think “The Whiteness of the Whale” and I think “Loomings” — that those two chapter titles are among the novel’s most memorable features.
(While I was catching up on email, my wife was shopping online for fitted sheets. She kept forgetting, and asking me, the dimensions of our beds. “Our bed is six by seven, the guest bed is five by six,” I kept saying.)
I mentioned in my email that the government kept extending the birdemic restrictions by two weeks and two more weeks and two more weeks. This made me think of a line from Macbeth, and, abandoning the half-written email, I started link-surfing Wikipedia instead. I went from “Tomorrow and tomorrow  and tomorrow” to “Soliloquy” to “To be or not to be”  to “Cultural references to Hamlet” to “Roderick Alleyn” to “Gentleman detective” to “Gentleman thief” to “Carmen Sandiego.” (I probably could have skipped a few of those steps, since apparently there was a movie called Carmen Sandiego: To Steal or Not to Steal released last year.) The illustration accompanying this last article didn’t match my memory, so I ran an image search on carmen sandiego 1985, and that brought up a DOS game screenshot featuring the city of Moroni, Comoros.
Wondering what the building in the picture was, I searched for moroni comoros building. Apparently there’s only one building of note there, since every result was the Grand Mosque du Vendredi. 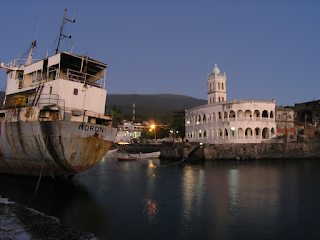 I thought it looked a bit like the Nauvoo Temple — which, it so happens, was the first Mormon temple to be topped with the figure of the angel Moroni. 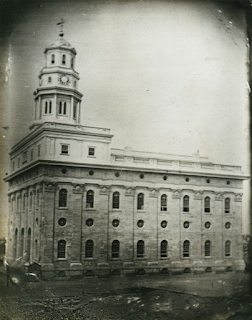 I thought of how the angel Moroni was occupying the place that would traditionally be given to the cross, which made me think of the Coleridge line “instead of the cross, the albatross.” And this brought me back to Melville: Ishmael’s recollection of the first albatross he ever saw, which he repeatedly likens to an angelic being. “Its vast archangel wings, as if to embrace some holy ark” — “flew to join the wing-folding, the evoking, the adoring cherubim” — “as Abraham before the angels, I bowed myself.” This last is an allusion to the story of Sodom and Gomorrah.
Joseph Smith's golden plates are supposed to have been buried by Moroni in the Hill Cumorah, and various attempts have been made to connect these names with Moroni in the Comoros -- proposing either than Smith pinched the names from a world map (which in his day often called the country Camorah) or from the memoirs of Captain Cook, or that the Comoros were settled by Austronesian Nephites who brought the names with them. I have long wanted to write something about homosexuality and Mormonism, to be titled "Sodom and Cumorah," but so far I have nothing interesting to say on that subject and so, like the essay on Lehi's dream to be spooneristically titled "Rods and Mockers," it remains unwritten.
Looking up Ishmael's rhapsody on the albatross to make sure I had quoted it correctly (I had), I found that it comes from "The Whiteness of the Whale" -- Chapter 42 of Moby-Dick. That number seemed significant, and it took me a second to remember why.
Earlier in the day, before attempting to write an email while repeating bed measurements, I had taught on online English class. The text we were discussing included this sentence: "According to psychologists, children have to repeat certain tasks, like multiplication or division, over and over again until they can do them automatically." In the course of explaining it, I said, "So now if I say 'six times seven' you immediately think '42.' If I say 'seven times eight,' you don't even have to think; you immediately know it's 56." I realized that these two equations I had randomly chosen as examples mapped to the dimensions of the two beds: 42 is literally "six by seven," and 56 is in a different sense a five "by" (adjacent to) a six.
(Bed dimensions are also a link to the Cities of the Plain. If I remember correctly, an aggadah compiled in Louis Ginzberg's Legends of the Jews takes the story more normally associated with the name of Procrustes and relocates it to Sodom, saying that it was the men of Sodom who had the custom of placing strangers on a bed and making them fit it by either stretching or amputating their legs.)
Someone sent me a link to a page (in Chinese) about a local temple I might be interested in visiting. As I idly scrolled through photos of the place, I started thinking about a different Chinese temple we had visited a year or so ago. Outside the temple was a paved area in the shape of a large circle divided radially into what I at first took to be 56 segments, each labeled with I Ching terms. I found this to be interesting because of the potential Tarot connection, and I actually walked around the circumference of the thing counting the segments as I went: yes, 56. I found this puzzling -- shouldn't it be 64 for the 64 hexagrams? -- and tried to work out the system behind the labels. Finally, I ended up circumnavigating it again, more slowly, and counting all the segments once more, and this time I did indeed get 64. Apparently both my gestalt impression that it "looked like 56" and my initial miscount had simply been errors.
As I kept scrolling though temple photos, I found that one of them -- included without explanation and for no obvious reason -- was a photo of the number 560 chalked onto a stone surface. 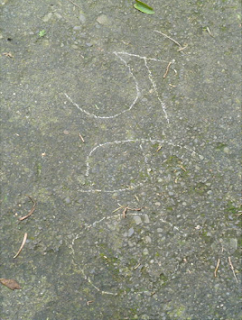 Just before I posted this, my wife was watching Thor: Ragnarok on television, and the number 142 popped up a few times in obvious look-an-Easter-egg fashion. I didn't bother to look up what it might mean to the guys who made the movie, but I thought, "142 -- doesn't that mean something to me?" I couldn't put my finger on it, though, until I returned to this unfinished post and realized that 1 and 42 are the numbers of the two Moby-Dick chapters I mention in the first paragraph.
Why Moby-Dick should be on my mind is anyone's guess. I've only read the book once, and that was back in 2006. It made a big impression at the time, but I've sort of been afraid to reread it.
at July 18, 2021

Email ThisBlogThis!Share to TwitterShare to FacebookShare to Pinterest
Labels: Comoros, Herman Melville, Moroni, Shakespeare, Sodom and Gomorrah, The highway is for gamblers

I also read Moby Dick in 2006 and was powerfully impressed. I've wanted to read it again several times, but never made it past Nantucket again. My family and I were in Nantucket a few days ago and I began to feel inspired to read it again. Then your post came along. Not sure what it means, but I plan to read the first chapter again and find out.

Do you have an intuition about the nature of this "something big", whether it will be good or bad or some of both?