Back in January, one of my readers contacted me to say that he had been encountering seemingly significant sequences of fives (55, 555, 5555, etc.) for years and asked if I had any idea as to what it might mean. Since then, we've been corresponding on and off, often but not exclusively about 5-related synchronicities.
Today my wife told me she had ordered five pairs of socks for me and that I needed to pick them up at the shop and pay for them. When I asked how much, she said, "I don't remember, 500-something." When I went to the shop, I found that the total was exactly $555.

I thought there was some significance to 555 being associated with socks, and then I got it: 666 is fox. Fox in Socks! Regular readers will know that I've posted quite a bit of synchromystical analysis of Fox in Socks.(See, for example, "Slow Joe Crow," "Lots of new blue goo now," "Crazy like a fox," "Robin Hood," "Political prognostication, plus rhinoceroses!" and "Wake up, little Susie.")
Why is fox equal to 666? It comes from taking the system of Greek and Hebrew numerals, on which gematria is based, and applying it to English. The first nine letters have values from 1 to 9, the next nine are numbered from 10 to 90, and the remaining letters are assigned to the hundreds.

So I gave Fox in Socks a quick reread to see if anything new jumped out at me. Well, yes -- taking "new" and "jump out" quite literally. 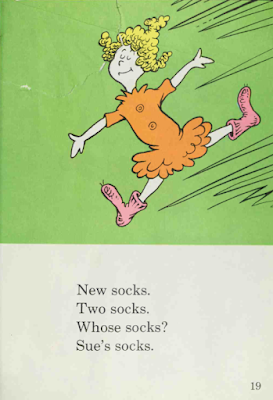 This caught my attention because I had just got some new socks. Only later, after posting the gematria table above to show the reader how fox = 666, did I realize that by the same rules, new = 555.
⁂
Incidentally, the Greek-numeral equivalent of FOX is ϜΞΧ. Replacing O with Ξ (xi, three horizontal lines) was discussed in my old post, "Jay-Z in 2009 presages Biden and 2020." It also means Biden was adding the letter xi to his name in his logos, paralleling the nickname Xiden, used by his critics to suggest that he is a pawn of China.
⁂
Note: My title means (roughly) "Yes, that's just it!" in Spanish. It's pronounced S-O-C-K-S.
at July 20, 2021

Email ThisBlogThis!Share to TwitterShare to FacebookShare to Pinterest
Labels: Dr. Seuss, Gematria, Joe Biden, The highway is for gamblers

Looking back at that Jay-Z post now, I see Bruce Charlton had left a comment saying (sarcastically, I think) that the three-horizontal-line logo "probably means 666 or something to do with Freemasons."

I listen to Aaron Clarey's videos, and today (July 20) I was listening to one of his videos published July 20. It was about "Kabalarians", and I did not know anything about that, so to learn more I went to their website and watched the first first video on their homepage, which discusses your alphabet chart from today's post (July 20).

Thinking about Sue and Slow Joe Crow today, I spontaneously associated Sue with the cuneiform character Su/Zu, "deep," which is a component of the name Apsu. Crow would then be the raven which Noah released to fly over the deep waters of the flooded earth.

The Noah association is very interesting. It has become almost mandatory for governments to hoist the rainbow flag. I assumed the inversion of the value (associating it with pridefulness of sin) instead of God's promise was an intentional esoteric mockery: "You will not destroy your fallen children again."

I just noticed that I posted this at exactly 5:55 p.m. local time — not by design!