I hadn't made this obvious connection until I watched this video by Jonathan Pageau, in which he gives an extremely insightful analysis of a speech given by Apple CEO Tim Cook a few years ago. (I've been watching more and more talking videos recently, having discovered the trick of playing them at 1.5 or 1.75 speed to make the experience more tolerable.)

Cook is giving a fiery speech about how Apple is standing up for its "values" because "it's the right thing to do" -- and, as Pageau shows, he makes it perfectly clear what those values are. Pageau's summary:

The only value that really matters is the value of inclusion, and the only thing that is a problem is if you oppose yourself to that system which is created to include everybody.

Cook talks about how Apple is going to deplatform anything that promotes "hate" or "violence," but, as Pageau points out, the two examples Cook focuses on are not songs and movies that literally glorify hate and violence (those are okay, obviously!), but rather "white supremacy," i.e. excluding and marginalizing other races, and "violent conspiracy theories," i.e., questioning the System and its motives. (By the way, what the hell is a "violent conspiracy theory"? Must be something like a colorless green idea!) 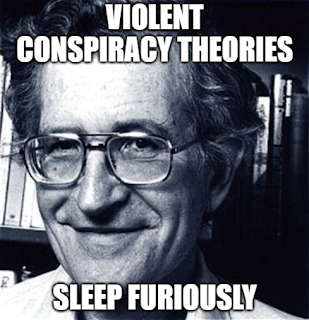 "Inclusion" means everyone and everything must be fully incorporated into the System. No one is allowed to be excluded or even marginal. The excluded must be included, the marginal must be redefined as central. There's a classic cartoon-villain term for this goal: taking over the world.

And those who would exclude or marginalize others, or who would question the goodness of the System itself? Are they to be excluded, leading to an obvious self-contradiction? No, they are to be either assimilated or destroyed. When Cook says that those who "push division and violence" (meaning, as we have seen, exclusion of others and criticism of the System) "have no place on our platform," he obviously doesn't mean that they should leave Apple and find some other platform. No alternative platforms can be tolerated, since then there would no longer be one single all-inclusive system. He's not telling white supremacists and conspiracy theorists to take their business elsewhere; he's telling them to fuck off and die. Lower your shields and surrender your ships. Resistance is futile. You will be assimilated.

A very clear example of the Ahrimanic ideal: "that one soul shall not be lost."

The majority who regard the system as the source of all possible values; fear Not being allowed to stay inside the system; thus they fear and empathize with the idea of being excluded from the system involuntarily - as an ultimate kind of suffering, a living death.

A minority, who know the system to be evil and repent their dependence upon it, realize that in truth exclusion is forbidden - nobody is allowed Not to be included; nor to discuss the reality of life outside or beyond the system.

Re: the introduction of House Resolution 666 - “The anti-racism in healthcare act”. Which is such an amazing example of everything that Pageau was speaking of about nothing can be outside the system.

On the subject of 666, it also occurs to me how appropriate (and, if you think about it, sinister) the term World Wide Web is. (W = 6 in Hebrew.)

Hahaha - that’s almost too perfect given the shape of “the web” these days. I appreciate your corner of it though - thanks!