The ancient and honourable, he is the head; and the prophet that teacheth lies, he is the tail.

-- Isaiah 9:15
More than a year later, Russell M. Nelson, President of the Church of No We Don't Worship the Goddess Mormo, apparently still stands by his Satanic statement about his "utmost concern." If he had repented, he would never have allowed it to be quoted again on the official church website.

The Church of Jesus Christ of Latter-day Saints is following the lead of governments and healthcare professionals around the world as it considers a measured return to normal operating procedures disrupted by COVID-19.
The Church is moving forward in all areas of the world with ample caution, always strictly following the guidance of governments to prevent the spread of the pandemic. “Your safety and well-being will always be our utmost concern,” Church Prophet and President Russell M. Nelson said on May 6, 2020.

This guy is supposed to be a living prophet, with the same authority as Moses or Elijah. Good thing he's "following the lead of governments and healthcare professionals around the world." Imagine the chutzpah of calling yourself a prophet while advertising such a basic failure of spiritual discernment!
As for the damning sentence, "Your safety and well-being will always be our utmost concern" -- an explicit rejection of "Seek ye first the kingdom of God and his righteousness" -- I'm sure I will be told that I'm blowing it out of proportion, that it's just a meaningless bit of manager-speak and was never meant to be taken literally. 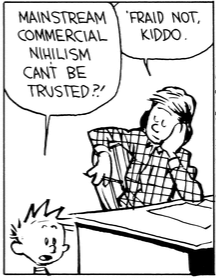 This does nothing to absolve President Nelson, though, since such habits of speech come effortlessly only to those who have internalized the systematic dishonesty of the bureaucratic world.
Russell M. Nelson -- RMN. Say the initials out loud. Remind you of anything?
at July 19, 2021

Our utmost concern is that you don't catch the common cold. How comforting.

“Your safety and well-being will always be our utmost concern”

The Mormon Church has multi-billion dollar investments in pharmaceutical companies.

Otto, that may be true, but I don’t think that’s their reason for embracing the birdemic narrative. This was never about anything as venial as money.