S. K. Orr recently posted a link to a particularly inspired Tucker Carlson monologue, under the heading "I, Too, Want To Encourage Brandon To Go." This rephrasing of the "Let's go, Brandon!" slogan made me think of the Dr. Seuss classic Marvin K. Mooney, Will You Please Go Now? -- and of the time-honored tradition of replacing the title character with the president of the United States. 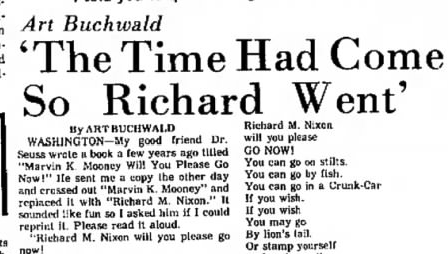 "Marvin" put in an appearance in my recent Gene Hackman dream, in which Hackman plays a father interacting with his son in a series of short video clips. At first the son is called "Danny," and the Hackman character is angry (expressing that anger by means of minced oaths like "Gosh darn it!"); later, the son becomes "Marvin," and Hackman's tone changes to one of kind reassurance.
In my original post on the dream, I asked "Why Gene Hackman?" and offered some speculations, but I did not consider the two names of his "son."
When I hear the name Danny, the first association I make is with the song "Danny Boy," which begins thus:

O Danny boy, the pipes, the pipes are calling
From glen to glen and down the mountainside
The summer's gone and all the roses falling
'Tis you, 'tis you must go, and I must bide

So Danny and Marvin have this in common, that they must go. (After which "Danny Boy" stops just one consonant short of name-checking Slow Joe!)
In my 2009 post "The old savanna calling," I discuss "Danny Boy" (as modified by the Beatles) in connection with 9/11 prophecies. I link it both to the lion and to the 18th Tarot trump, the Moon. In the Seuss book, Marvin's last name is Mooney, and "by lion's tail" is suggested as one of the many ways in which he may "go." This even makes it onto the cover of some editions. 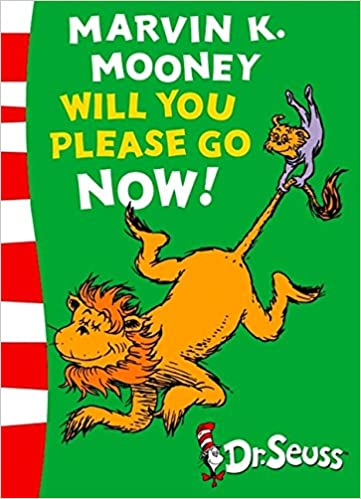 The "Let's go, Brandon!" phenomenon began on October 2, 2021. In the "Ripple" Tarot spread, October 2021 is represented by a modified version of the Moon card. Where the traditional Tarot card features two dogs, or a dog and a wolf, the "Ripple" version replaces them with (Chinese-style) lions. 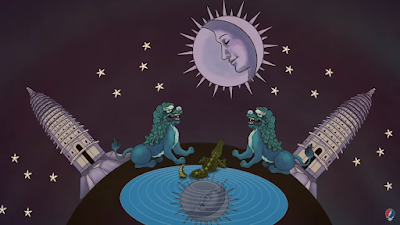 As for the name Brandon itself, it apparently derives from a Celtic root meaning "crow, raven" (Slow Joe Crow). There is also the etymologically unrelated French word brandon, meaning a flaming torch, or a twist of straw or paper used to start a fire. This ties in with my "spontaneous human combustion" premonition, and with a dream in which Slow Joe is called "the Human Torch." There's also this interesting figurative meaning:

(In case your French is even worse than mine, a brandon can be a person or thing that provokes conflict, and the bolded phrase means "a brandon of civil war.")
Finally, I note that "Let's go, Brandon!" has become a way to curse without cursing, a way of implying a particular vulgar word without actually saying it. This ties in with the "Gosh darn it!" minced oaths of my Hackman dream.
at October 17, 2021

Email ThisBlogThis!Share to TwitterShare to FacebookShare to Pinterest
Labels: Do you dig what the music is saying?, Dr. Seuss, Dreams, Gene Hackman, Joe Biden, Tarot, The highway is for gamblers

Just after posting this, I checked my email and found this description of part of a Terry Boardman video: “he talked about hosting people in his room in Japan and how an older man said, something like ‘it's time to leave’ and everyone immediately cleaned up and left.”

The time had come, so Marvin went.

Are you suggestion I should chant "let's go Marvin!"?