In my last post, "Dove and serpent," I mentioned reading in the Wikipedia article on Jonah about a possible link, proposed by Joseph Campbell, between Jonah and Gilgamesh. Campbell also made another link:

Campbell also noted several similarities between the story of Jonah and that of Jason in Greek mythology. The Greek rendering of the name Jonah is Jonas, which differs from Jason only in the order of sounds—both os are omegas suggesting that Jason may have been confused with Jonah

"[. . .] But with the help of all the brave people in different government departments and all around the country working on this case, we’ve got Alvarez on the run and are tightening the noose around his neck. Some of these people are here with us tonight. People like Robert Mueller, director of the FBI. Like Michael Gellers, a police officer who successfully defused a BOOJUM bomb in Philadelphia. Like Sonja Horah . . .”

President Bush spontaneously caught fire. “HELLLPPP!” he screamed as the entire executive, legislative, and judicial branches watched on in horror. “HELLLPPP . . . HELL . . .”. By the time Secret Service agents reached him at the podium, he was already a charred corpse.

In the novel, the reason Bush caught fire was that the name Sonja Horah contained the sequence Jahorah, a magical "name of God" that causes anyone who pronounces it to die on the spot.

What does the name Sonja mean? It's a Russian diminutive of Sophia -- so, wisdom, but a lesser wisdom. This is precisely what William Wildblood ascribes to the serpent in his recent post "The Serpent and the Dove":

Jonas is the dove. Sonja is the serpent. What about Jason? Etymologically, Jason means "healer" -- but in English it sounds like "son of the jay," and I've known several Jasons who went by Jay or even Jaybird. Jason is a corvid, then -- perhaps even the solar crow ("jay-sun"). Jesus paired the dove with the serpent, but Noah (who is also part of the Joan/Jonah pun) paired it with the raven. 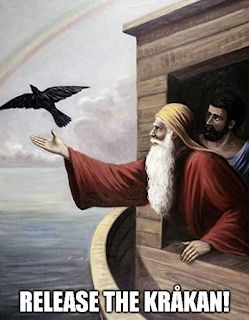 Email ThisBlogThis!Share to TwitterShare to FacebookShare to Pinterest
Labels: Jonah, Noah, Scott Alexander, The highway is for gamblers, William Wildblood

Jason, as both healer and corvid, is a link to Slow Joe Crow the plague doctor.