You may recall that back in 2020 there was a campaign on 4chan to trick Biden supporters into adopting Pedobear as a mascot, using the slogan #BearWithBiden. 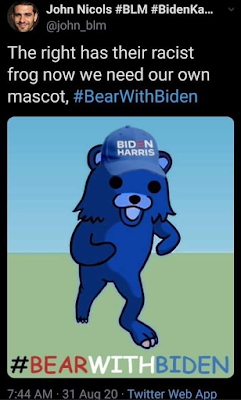 In a comment to my recent post "Brandon the Crow - Russell Crowe - Russell Brand," Debbie (Ra1119bee) wrote, in part:

BR is the Bear ( BR of course after omitting the EA ( Vowels )
BR ( the Bear ) as in : BERN ( Switzerland and Germany )
The Bears ( who are Alchemists ) are pulling the strings...

Now I must say I don't quite follow this train of thought -- I'm not entirely sure where "BR" came from (Russell Brand's initials backwards? first two letters of Brand?), nor am I sure how we get from bears to alchemists -- but I know this commenter, she's about as in tune with the sync fairies as anyone I know, and her mention of BERN (in caps) turned out to be helpful.
In my October 22, 2020 post "Jay-Z in 2009 presages Biden and 2020," I noted that the three red horizontal lines that replace the E in the Biden 2020 campaign logo also appear on the covers of several Jay-Z (another corvid name!) records from 2009, including this one: 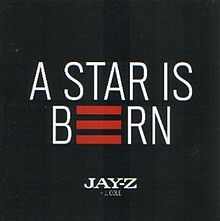 I found this one particularly funny because, while Jay-Z intended it to be read “A Star Is Born,” the Biden campaign would later use three red lines to represent E — making the Jay-Z cover read “A Star Is Bern.” In my original post, I took this as a reference to Biden’s rival Bernie Sanders, but now I see that Bern = bear = Biden. In fact, flip the two central letters and you get BIdEN. 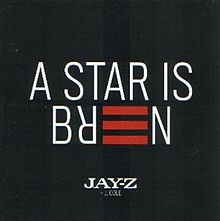 I've mentioned before that the three horizontal lines used in Biden's campaign logo also resemble the Greek letter Xi. Xi is also the leader of China, and the nickname Xiden has been used to imply that Biden is a pawn of that country. Xi is of course also closely associated with "bear" imagery. 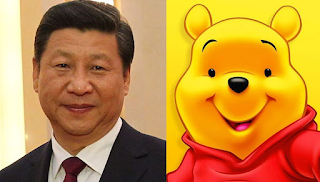 Pooh also confirms my original association of "A Star Is BERN" with Bernie (from Bernhard, "brave as a bear") Sanders, since "Winnie-the-Pooh lived in a forest all by himself under the name of Sanders." 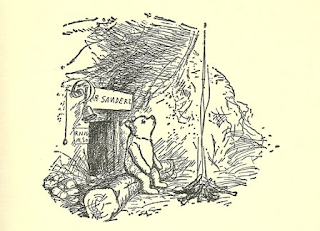 Incidentally, Pooh also ties in with Robin Hood, since he belongs to Christopher Robin, and his name is simply Hood written upside down. I note that my original Robin Hood post begins with a reference to "Samson tying firebrands to the tails of foxes." The firebrand -- French brandon -- has recently reappeared in the sync stream, and it was the fox that originally led me to connect "A Star Is Born," and Biden, with Xi. After noting that FOX could represent the number 666, I wrote, "the Greek-numeral equivalent of FOX is ϜΞΧ," and realized that Jay-Z had made this same O-to-Xi substitution.
Now that the bear connection has been made explicit, a possible interpretation of the three red lines suggests itself.

And behold another beast, a second, like to a bear, and it raised up itself on one side, and it had three ribs in the mouth of it between the teeth of it: and they said thus unto it, Arise, devour much flesh (Daniel 7:5).

This bear is the second in a series of four beasts, and an angel later explains to Daniel that "these great beasts, which are four, are four kings, which shall arise out of the earth." The first beast was a lion, which has already been identified as a symbol of Trump. After the lion, a bear. As I note in my post "One beast becomes four, and four become one" (like that title, Debbie?), the lion, the bear, and the other two beasts are later combined into a single Great Beast of the Apocalypse.
⁂
Now a few odds and ends.
First, Jay-Z is also known as Hova or Hove -- from the blasphemous nickname Jay-Hova, with the Jay removed. This parallels the case of Sonja Horah, where the Ja- is separated from the rest of the Tetragrammaton.
Second, my recent post "The birdemic in Asterix and the Chariot Race" discusses the French comic-book series Asterix. I've never really read much Asterix; I heard someone mention the birdemic connection and decided to look up the details. Just yesterday, though, I was reading The Sacred Heart and the Legend of the Holy Grail by René Guénon, and I found this: "The Round Table was destined to receive the Grail when one of the Knights should have succeeded in winning it and bringing it from Britain to Armorica." This caught my eye because of the similarity of Armorica to America, so I looked up the former name online and read, "The home village of the fictional comic-book hero Asterix was located in Armorica during the Roman Republic."
Asterix and his friend Obelix obviously take their names from the typographic symbols asterisk (*) and obelisk (†, also called dagger). "A Star Is" is very similar to "Asterisk." This is reinforced by the word born which follows, since "the asterisk and the dagger, when placed beside years, indicate year of birth and year of death respectively. This usage is particularly common in German." (Debbie had highlighted Germany and Switzerland in her original BERN comment.)
at October 25, 2021

EXCELLENT !! Excellent Insight !!!
Thank You so very much for this information..
I'm in awe.
Interesting the bear connection to Xi of China.
I did NOT know that.
I love to learn from you.


As far as your statement about not agreeing with or seeing the connection of Bears and Alchemy, may I explain :

My objective is and has always been to help shine a light to 'out' our Opponents ( whom I believe our Opponents are the negative polarity of this duality dimension we know as Earth ) .
I've attempted to do this by sharing information which I believe is from our Opponents playbook.
Information I've gathered ( through much research over a vast spectrum of ideologies instigated by Esoteric Experiences and dreams ( many premonition ) that I've gathered over a lifetime. I'm a Baby Boomer.

I believe Our Opponents were/are Alchemists, Mathematicians, Navigators, Astrologers,
Astronomers. Occultists, manipulators of the Sacred Sciences Knowledge which is the Universal Language of Symbolism, Numerology/Gematria and Archetypes.

I believe that The Sacred Sciences were known by the indigenous people.

I believe Our Opponents were/are Masters of Illusion ( which is Hope ) Manipulation ( which is fear ) and especially Divide and Conquer.
They control all power sources ( ON THIS DIMENSION , EARTH )through Sex, Power and Money.

Our Opponents control and manipulate Time and Matter ( on This Planet )
The Cross is an X turned sideways. An X is an Hourglass, which is a measurement of Time/Saturn.

You commented about the star.

The Star is the Steer. Navigators used the North Star to steer and navigate the seas.
A HERO is : HE ROWS.

The Navigational Steer/Star is the Eight Point Union Jack.
In Babylonian symbolism, the goddess Ishtar is represented by an eight-pointed starburst, and she is associated with the planet of Venus. Today, some people equate the Greek Aphrodite, whom the Romans equated with their Venus, with Ishtar. Both goddesses represent lust and sexuality, although Ishtar also represents fertility and war.
The Octagon is very important to the Bears.

The ' Bears' are Very Powerful on this Dimension. They hide in plain sight.
Greenland, Switzerland ( all for one and one for all ) and Germany have many Bears.

Why is CERN in Geneva?
Why is the Polar Bear Logo on the Coat of Arms of Greenland facing in the cardinal direction of WEST with its tongue extended.?

Why the cardinal direction WEST?
Research the Temple coin ( Shekel ) with Donald Trump and Cyrus, both facing
in the Cardinal Direction West.
Research the Gadson Flag and the Serpent facing West, tongue extended.
Research The United States Bald Eagle emblem ( which the Eagle is really the mythological Phoenix ) faces West .

West is the direction of the 'little death' aka the setting sun ( the reddening ).


Remember Donald Trump and his so called dream of buying Greenland?

I meant to write : Gadsden flag , not Gadson.

BERN sounds like burn -- as in "a burning brand."

Bear and its Germanic cognates derive from the same root as brown. (Many European cultures have superstitiously avoided referring to this animal directly, using such euphemisms as "good calf," "honey-eater," "big bad wolf," etc. In the Germanic languages, the euphemism was "brown one.")

The Brandon whose name has become an anti-Biden euphemism is Brandon Brown.

Regarding the various animals facing "west" (i.e., "to dexter," or to the viewer's left), that's the default position for all animals in heraldry unless specified otherwise.

Ah, interesting about the animals facing west. I did not know that.

I do find the connection to the Cardinal Direction West and the reddening and the setting sun, still very intriguing however, considering that in Alchemy , the Rubedo is the last stage of the Alchemical Transformation.


William,
I just want to say again, that I am very much in awe
of your knowledge.