In my last post, "Brandon the Crow," I mentioned Brandon Lee of Crow fame and connected him with the actor Russell Crowe. Then I thought, Hey, isn't there some sort of famous person called Russell Brand? He would complete the Venn diagram! 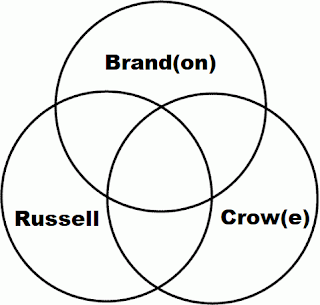 I am really terrible at remembering who Russell Brand is -- I always get him mixed up with Richard Branson, and I can't remember who that is, either -- but a quick image search jogged my memory: He's that guy who played Trinculo in that one messed-up Tempest movie that had a gender-flipped Prospero.

Then I discovered that the dude's got a YouTube channel -- and that he apparently actually belongs in the center of my Venn diagram. That's right: This guy, whose name came to mind only because he's called Russell as in Russell Crowe and Brand as in Brandon "the Crow" Lee, turns out to have a thing for crows.
And, skimming the titles of some of his most recent videos, I find lots and lots of anti-peck stuff and -- but of course! -- a video on "Let's Go, Brandon!" Is it possible that this weird-looking Hollywood guy could actually be on our side? Probably not (evidence: YouTube hasn't banned him), but it does suggest that the sync fairies brought him to my attention for a reason.
at October 24, 2021

Email ThisBlogThis!Share to TwitterShare to FacebookShare to Pinterest
Labels: Birdemic, Russell Brand, The highway is for gamblers

Brand, of course, is the English cognate of the French term brandon for a firestarter or torch, as in firebrand.


The Bears ( who are Alchemists ) are pulling the strings...
* Always know what your opponents know i.e "Wise as serpents ***

In Alchemy the Nigredo aka the Blackening/Melanosis ( symbolic of the Crow and sulfur ) 'ignites' All Alchemical Transformations as the Crow "pecks away" at the Dead Corpse.

The Dead Corpse is Humanity.
Our Opponents, The Bears, End Game has always been Transhumanism via Artificial Intelligence. A I is NOT NEW.

"In the alchemical sense, the Nigredo or blackening, means putrefaction, decomposition. By the penetration of the external fire, the inner fire is activated and the matter starts to putrefy."

"Putrefaction is so effective that it destroys the old nature and form of the rotting bodies; it transmutes them into a new state of being to give them a totally new fruit. Everything that has live, dies; everything that is dead putrefies and finds a new life." (Pernety, 1758)

Yesterday, I read somewhere that the armorer that was on the set of Alec Baldwin's Rust also worked on the set of Brandon Lee's The Crow. But now I cannot find that information.

Seems like too much of a coincidence to be accidental.

Not sure how this fits in, but it seems related somehow.

Rust and Russell derive from the same root, meaning “red.”

Nice to see you around these parts, Debbie. I will expand on your BERN/bear connection in a future post.


Do include Britain as well, and Boris the Bear..
Research The Coat of Arms of Greenland and the Polar Bear.

And speaking of Greenland/Denmark, and regarding your previous post ; Danny, Marvin, Brandon: Let’s go!, note that by removing the vowels, DAN IS ALSO DEN AND ALSO DIN AND ALSO DON of
course from Latin dominus "lord, master, owner" (from domus "house," from PIE root *dem-"house, household"). It took on a general sense of "person of high importance or leading position,"

I personally don't think we've seen the last of DON Trump.
Perhaps Trump will be a future Triumvirs?

Same in swedish. A brand is a fire.