The birdemic in Asterix and the Chariot Race

Astérix et la Transitalique was originally published in French on October 19, 2017.
The Romans organize a Trans-Italic chariot race, with charioteers representing each of the peoples of the known world. Rome itself is represented by a bird-shaped chariot driven by a charioteer with a very interesting name. 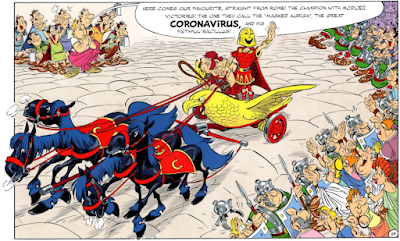 By a strange coincidence, this charioteer also wears a mask. 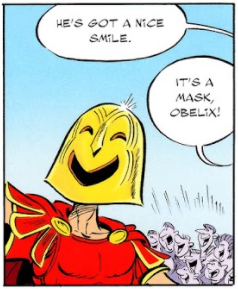 His name is on everyone's lips. 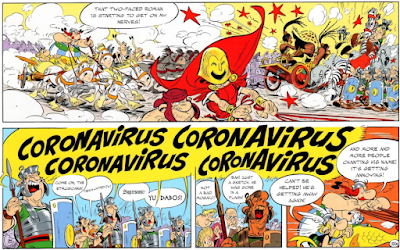 This greatly pleases Caesar, who understands that those who repeat the charioteer's name are actually expressing their loyalty to the Empire. 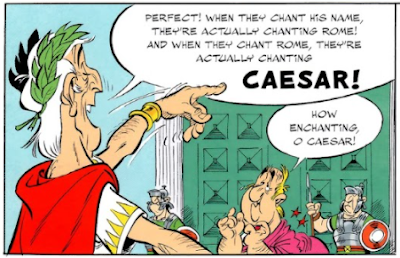 In the end, the mask finally comes off, and -- hey, whaddaya know?

A further coincidence: October 19, 2017, the date this comic was first published, was also the day the Italian film director Umberto Lenzi died. One of his movies was called The Invincible Masked Rider. This is the plot summary, Google-Translated from Italian Wikipedia.

Around 1670, a plague epidemic broke out in Higuera. Don Luis kills the housekeeper and takes refuge in his castle to escape the infection. At the same time, a masked man takes charge to defend the poor against the usurper. Don Luis's stepson also arrives after a long absence.

Email ThisBlogThis!Share to TwitterShare to FacebookShare to Pinterest
Labels: Asterix, Birdemic, The highway is for gamblers, Umberto Lenzi

I'm not sure but I think the charioteer's name might mean something in Latin like "crowned man".

No, he’s actually named after a sort of virus, a typical Asterix joke-name. Note that his assistant is named Bacillus.

I think “crowned man” would be “vir coronatus” — almost an anagram, but with a leftover T. Come to think of it, T was the 19th letter of the Classical Latin alphabet (before the invention of J), so I guess it fits.

Interestingly, this was the first Asterix book Not translated into English by the brilliant Anthea Bell.

My favourite Asterix name was the centurion Crismus Bonus from Asterix the Gaul. I suppose most of the names we are familiar with come from Anthea Bell not Goscinny and Uderzo.

Interesting he is brought in by “night mares”

The horses are also marked by Omega, the end? The birdemic brought in by the End Times?

The soldiers are holding pecks and shields (“personal protective equipment”)

Have we got an "omega variant" yet? It can't be far off.

I decided to see if anything popped out for the charioteer's MCDLXII victories and lo and behold Google suggest showed, for a split second, "1462 the year China discovered the world". And also "1462 the year Constantinople had fallen". Neither of the dates is remotely correct (the first suggestion is for a book titled '1421 the year China discovered the world' and the second refers to the actual fall of Constantinople in 1453).

Ah, there is also a 1992 film titled "Bram Stoker's Dracula" which opens with the narration 'The year, 1462. Constantinople had fallen."