Rudolf Steiner saw Lucifer, Ahriman, and the Christ in Aristotelian terms: Lucifer is one extreme; Ahriman, the other; and the Christ represents the perfectly balanced "golden mean" between the two. This corresponds to the virtue theory propounded in the Nicomachean Ethics -- where, for example, Courage is seen as a golden mean between the extremes of Cowardice and Rashness.

It is wrong to conceptualize the Christ this way -- as if the goodness of God consisted in being just Ahrimanic enough without being too Ahrimanic -- as if Lucifer were 0, Ahriman were 1, and the Christ were 0.618... (realized to infinite decimal places in the Christ himself, but only approximated by mere mortals!). "Moderation in all things" is a Greek maxim, not a Christian one. The Christian version is this: "I would thou wert cold or hot. So then because thou art lukewarm, and neither cold nor hot, I will spue thee out of my mouth" (Rev. 3:15-16).

As I pointed out in my post "Vice and vice versa," Aristotle's one-dimensional theory of virtue is also an inadequate conceptualization of evil. It is quite possible to be simultaneously cowardly and rash -- it has in fact been the norm since 2020 -- but there is no Aristotelian way to model that. I recommended as an improvement the Ganymede virtue set (GVS) as pioneered by "G" of the Junior Ganymede blog. 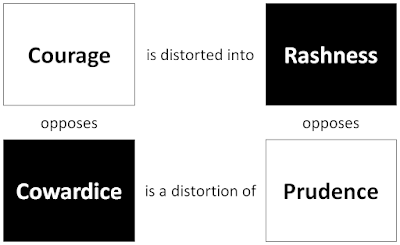 A two-dimensional GVS consists of two virtues and two vices (whereas a one-dimensional Aristotelian virtue set, or AVS, has only one virtue per two vices). Cowardice and Rashness are not opposites; Cowardice is the opposite of Courage, and Rashness is the opposite of Prudence. Cowardice and Rashness are complementary (not opposite) vices, and Courage and Prudence are complementary virtues. It is (as we see every day now) possible to be both extremely cowardly and extremely rash. And it is possible to be (like the Christ?) both perfectly courageous and perfectly prudent. To quote G himself, referring to a slightly different virtue set, "Confident Humility sounds like a contradiction. So does Arrogant Timidity. But they are common enough that they are almost archetypes."

In the GVS diagram above, it is clear that one of the vices (Rashness) is Luciferic, and the other (Cowardice) is Ahrimanic. Is that a general rule? Here are some more GVS diagrams from G (taken from "Charting Virtue" and the other posts linked therein, to which the reader is referred for more details on these particular virtue sets). 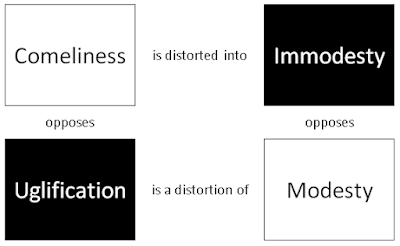 Immodesty is Luciferic. Uglification is Ahrimanic. 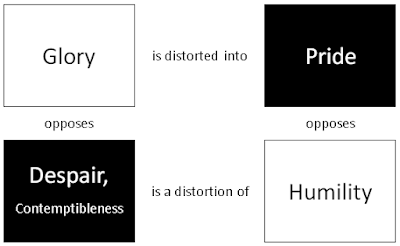 Pride is Luciferic. Despair and contemptibleness are Ahrimanic. 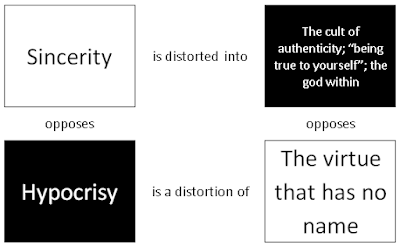 The cult of authenticity etc. is Luciferic. Hypocrisy is Ahrimanic. 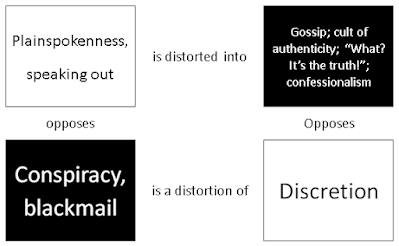 The cult of authenticity etc. is Luciferic. Conspiracy and blackmail are Ahrimanic. 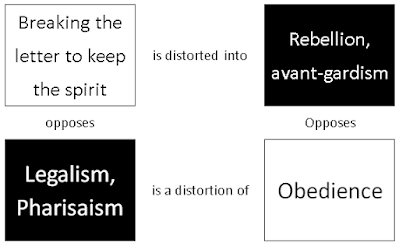 Rebellion is Luciferic. Legalism is Ahrimanic. 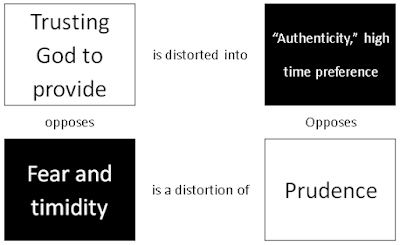 High time preference, like all the multitude of sins G puts under the heading of "authenticity," is Luciferic. Fear and timidity are Ahrimanic.
Every single GVS we've looked at contains one vice that is obviously Luciferic and another that is obviously Ahrimanic, and there is never any uncertainty or ambiguity as to which is which. (I have so arranged the charts that the Luciferic vice is always in the upper right, and its Ahrimanic complement in the lower left.) I'm going to go ahead and call this a general rule.
This implies that just as there is Luciferic evil and Ahrimanic evil, there are two complementary categories of good. Here are how these four categories are exemplified in the GVS diagrams above:
All four of these seem to be coherent categories, and they need names. In my post "Satan divided against himself," I described Luciferic sin as "sacrificing the avoidance of evil in order to pursue good" and Ahrimanic sin as "sacrificing the pursuit of good in order to avoid evil." This suggests the following analysis. 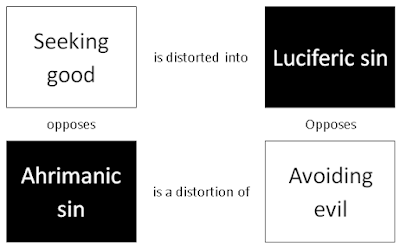 However, "seeking good" and "avoiding evil" are too abstract to fully capture the "feel" of each type of virtue. They really need names, like Lucifer and Ahriman.
Well, Ahriman comes from Zoroastrianism, where his opposite is Ahura Mazda -- so perhaps we can call the good-seeking, anti-Ahrimanic virtues Ahuric. In Zoroastrianism, ahuras are good and daevas are evil. In Vedic usage, though, asuras are evil and devas are good. It would seem, then, that the anti-Luciferic, evil-avoiding virtues that complement the Ahuric should be called the Devic. The master GVS, then, underlying all others, is this: 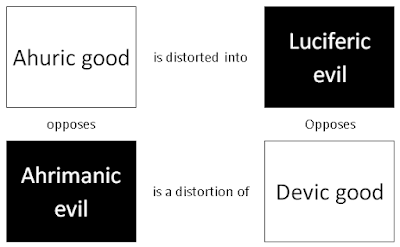 If anyone has better name suggestions, leave them in the comments.
at April 19, 2021

This isn't the way my mind works - and I therefore still (after reading some of his pieces on the subject) haven't a clue about AG's 'virtue that has no name' (nor why it can have no name - which, if my mind *did* work this way, would be obvious from its position on the matrix).

But I think it is correct given the assumptions. What I'm uneasy about (for us here and now) is whether dividing virtue into positive and negative is a helpful notion. I think we should probably be working towards a view that dispenses with such categories - which strike me, increasingly, as part of the medieval/ atavistic/ 'intellectual' soul world that is gone, obsolete and anyway irrecoverable. But I feel the same about a lot of stuff; yet it does seem to help some people. Maybe its that ladder that you climb up, then kick away?

Your early point about the unsatisfactoriness of Steiner's conception of Christ as a middle way between Lucifer and Ahriman is important; since most people interested in Steiner follow him down this path which seems very obviously an inadequate, inaccurate and indeed demeaning view of the Christ.

Strictly applies, it renders Jesus redundant, since a middle path does not require an incarnated representative. Of course most of the world does regard Jesus as unnecessary; but for grown-up modern Christians - well we (nearly always) need to know *why* he was essential to salvation, as well as *that* he was essential, else our faith is too easily demolished by The World.

I am astonished that its obvious wrongness does not strike Anthroposophists I respect like Barfield, Terry Boardman and Jeremy Naydler - and can only put it down to the 'I am infallible' spell which Steiner casts on so many of his followers.

The virtue that has no name is courtesy.

The name for that which opposes both Lucifer and Ahriman is Christ who is both true God and true man.