In the previous post, I mention the song "George" by my late uncle Mike "Hono" Tychonievich, about a dancing dog named George. The chorus goes like this:

The second and fourth lines vary after each verse, but "Hey, George! You're a real cool dog" is a constant.
I had been discussing George in the context of Tintin's dog Snowy, so it occurred to me that a "real cool" dog could also mean a dog that's cold, like snow.
And this made me think of the 2003 Outkast song "Hey Ya!" -- these lines in particular.

That "whoa, whoa, whoa" brings us back to Tintin's dog Snowy, who for some reason barks that way rather than saying something more traditional like "woof" or "bow wow." 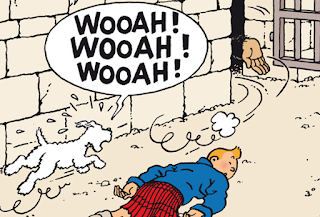 (When I was a child, there was some dispute as to whether Snowy's barking was to be pronounced "whoa" or "woo-ah"; I was and remain in the former camp.)
The "Snow (Hey Oh)" line "Listen what I say, oh" echoes the "Hey Ya!" line "Y'all don't want to hear me, ya just want to dance" -- which brings us back to George the dancing dog.
While we're on the subject of snow-and-ice songs with "hey"-heavy choruses, let's not forget "Hey Jude."

For well you know that it's a fool who plays it cool
By making his world a little colder.

Well, you know that it's a Fool. 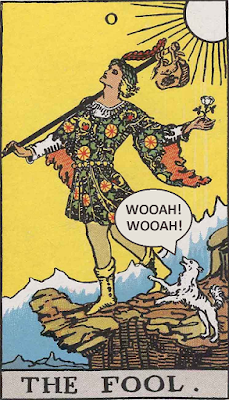 Aren't those snowy mountains in the background?
at April 27, 2021

Mr. Andrew beat me to it....I was just about to throw some Rush on you, William.

Thanks for the tip, gentlemen! It's not a song I'd heard of before.

According to the Internet, the lyrics were inspired by two dogs that were at a party: a German shepherd (like Rin Tin Tin) who liked to bite people, hence biter or By-Tor; and a small white dog (like Snowy).

I'm a little confused, though. If the Snow Dog is victorious, why do his disciples sound the knell?

I always associated By-Tor with Tor (Thor) - by Thor! But he's also the bad guy here, which doesn't really make sense either.

This is #1 result for searching '"tor" god' on DuckDuckGo:

A warrior god, Tor is the most active of the Kislevite gods, and quite frequently his name is used as a curse on others. For example, the phrase ‘Ty Tor!’ means ‘By Tor!’ and is an exclamation of surprise. On the other hand, ‘Do Tor!’ means ‘Tor’s Bolt!’ and is an entreaty for the god to unleash his anger upon the enemy.

There are apparently conflicting motifs here. Typically we associate dragons with flying (the kite), but was it traditionally just underworld/Hell (vs. St. George) possibly like from the By Tor song? "The Overworld Triumphs"

There are some mixed motifs here that don't really make sense in a pure Good vs. Evil sense. It reminds me rather of Old Testament ideas of God's mercy triumphing over his wrath (justice)...

Maybe there are at least 10 righteous people in Sodom and Gomorrah left and they wont yet be destroyed by fire from the Heavens (the dragon...?) quite yet and Tor will retreat to Hell again...

Connecting gators/crocs with George's dragon got me thinking of the passage in one of the Major Prophets (Ezekiel?) where some Pharaoh or the other is called, in an extended metaphor, "the dragon that is in the Nile," presumably with the crocodile in mind. And that, heaven knows why, made me think of these lines:

"Dame Dragon" is an anagram of "Armageddon"; "O Satanic line" is an anagram of "Nicolaitanes." It occurred to me that "O Satanic Nile!" was another possible anagram -- but that line of thought didn't seem to lead anywhere. Why am I mentioning it now? Because the lines I have quoted are part of the "Ouzo Papers" of Bob Evenson, a minor net.kook from the early 2000s. The Papers begin thus:

I am Bob the Baptist,
Precursor of the Second Coming of Christ,
Whose name is Tor.

When you mentioned the incongruity of associating Tor/Thor/Zeus (the lightning god) with the underworld, it made me think of the first page of the notebook James Joyce used when writing Finnegans Wake, where we can read this line: "Greeks believe thunderbolts form mines, gehinnon, sheol, unter welt." Also near the beginning of this notebook are the annotations "play tin pan" and "dogscare = nightmare 50 years after."

Using the name "Snow dog" in a song about a battle of good vs. evil is appropriate because it contains the hidden (backward) message "God won."