St. George, stake for the sun, and inevitable "miracles"

Taiwan is in the middle of a rather serious drought -- last year's typhoon season was canceled for the birdemic, and there's been no rain to speak of this year -- and the other day this made me think of an "inspirational" Mormon video I'd been subjected to many times as a child, called "The Windows of Heaven." In this short film, the people of St. George, Utah, are suffering from a serious drought. President Lorenzo Snow, then-leader of the Church, visits them from Salt Lake and tells them that if they donate more money to the Church, God will make it rain. He cites Malachi 3:10, where God promises to "open the windows of heaven" if the people "bring ye all the tithes into the storehouse." Even at the time, I was a bit cynical about this story. I mean, droughts don't last forever; if they hadn't paid more tithing, it still would have rained sooner or later. President Snow was taking credit for a "miracle" that was in fact inevitable.
⁂
Then, because my brain just works that way, I started thinking about the name St. George. The name George means means "farmer," a tiller of the soil. This -- combined with the context of the "miraculous" rainfall -- made me think of the Cat Stevens line "Tea for the tillerman, steak for the sun / Wine for the woman who made the rain come." (A "tillerman" is actually a boat's steersman, not a farmer, but I still made the connection.) Steak is a homophone of stake, meaning an administrative division of the Mormon Church (especially, historically, one far from Church headquarters). President Snow would have visited the local "stake" in St. George and promised to make the rain come.
And, wait, Cat Stevens' real name is Steven Georgiou -- St. George.
⁂
Yesterday, I received an email from a reader, mentioning St. George out of the blue.

During prayers (being Catholic) it suddenly popped into my head to say a prayer to “Saint George” - who I don’t really know anything about - and then going on the internet tonight I see joking references to “Saint George” (Floyd). Now reading, I remember he is mostly known for the legend of slaying a dragon.

⁂
Today, I received two emails from a regular correspondent. One was a link to a YouTube video of some priests discussing birdemic issues. One of these priests was introduced as the curate of St George in the Meadows.
The other email from this person included a scan from a Tintin comic book -- the episode in which our hero, while tied to a stake, "miraculously" makes the Sun reappear after a solar eclipse. 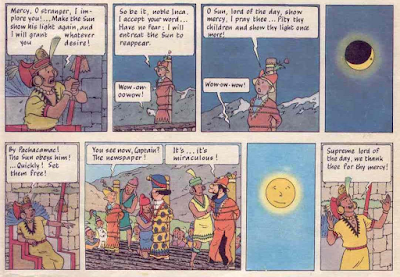 Like Lorenzo Snow in St. George, Tintin persuades people do what he wants by promising them a "miraculous" event which was in fact inevitably going to happen anyway.
Note added: I've just discovered that Le Temple du Soleil, from the English translation of which the above scan is taken, was originally published serially in Tintin magazine -- and the final installment was published on Thursday, April 22, 1948. I received the email with the scan in the early hours of Thursday, April 22, 2021, and posted it here later the same day. The panels in question are near the end (on page 59 of 62 in the English version), so I assume that they were part of the final installment and that I received and posted them on the anniversary of their original publication.
⁂
I'm not sure where this is all going yet, but it certainly feels as if the synchronicity fairies are introducing a new "theme" that they intend to pursue for a while. We'll see how it plays out.
Oh, by the way, tomorrow just happens to be St. George's Day.
Also, probably apropos of nothing, a chain of links originating with the "St. George" email led me to this cover of Pink Floyd's "The Gnome," which I rather like:
at April 22, 2021

Email ThisBlogThis!Share to TwitterShare to FacebookShare to Pinterest
Labels: Lorenzo Snow, Saint George, The highway is for gamblers, Tintin

Guess which country I am (currently) living in?

Your first guess was correct. The capital's main square also features a large gilded statue of St. George impaling a snake with a long stake.

(The same imagery is also a fixture in the videos of the Amazing Polly / 99freemind channel which I like to watch.)

I guess George's lance does look rather stake-like. You can see this especially in Dürer's woodcut of that saint.

"going on the internet tonight I see joking references to “Saint George” (Floyd). Now reading, I remember he is mostly known for the legend of slaying a dragon."

Saint Fentanyl Floyd was better known for chasing the dragon rather than slaying it.

Just to follow-up, Owen's dog is named George (really) - and the dragon reference was just a kite. Has absolutely nothing to do w/ St. George (Catholic of Floyd variety) - just a little coincidence/synchronicity at the same time.

By coincidence, St. George, Utah, is currently in a state of "exceptional drought" (D4).