Tintin, St. George, and, uh, lots of other things!

For context, please read "St. George, stake for the sun, and inevitable 'miracles'" and "Gadianton Canyon syncs" first.
In my last post, I connected Tintin saying "Hip-hip-hooray!" in Prisoners of the Sun with Terence McKenna's line, "The gnomes have learned a new way to say hooray." 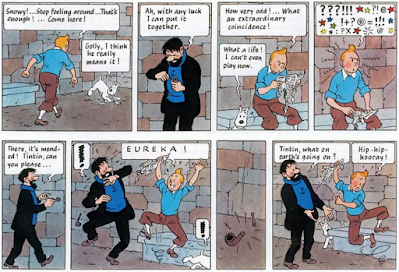 What does Tintin have to do with gnomes, though? Well, the name Tintin suggests the element tin, atomic number 50. Back in 2011, synchromystics took note of the fact that the movie Adventures of Tintin was released less than a month after a movie called 50/50. 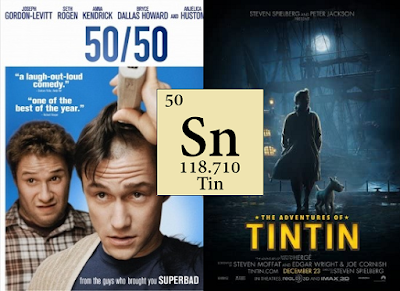 (Marvel's first Thor movie was also released in 2011. Thor is considered in the interpretatio graeca to be the equivalent of the Greek god Zeus, the Roman god Jupiter, and the Etruscan god Tin. The metal tin is also associated in astrology and alchemy with the planet Jupiter. Thor the superhero was created by Stan Lee, whose name also suggests tin.)
The next year, 2012, saw the release of Lockout, starring Guy Pearce as a CIA operative named Marion Snow.

50/50. Tintin. Snow Snow. Sn is tin, of course, and Snowy is Tintin's dog.
A worker in tin is called a tinker, and that's where the gnome connection comes in. Back in 1987, a new playable race was introduced into Dungeons and Dragons: the tinker gnome. 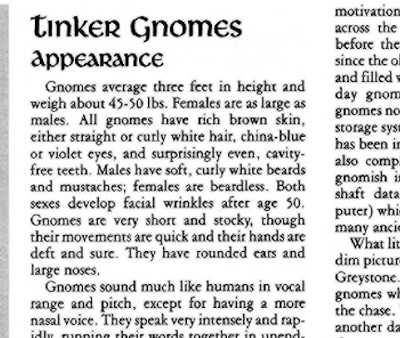 (That "nasal voice" bit even ties in with Terence McKenna!)
Tinkers learning a new way to say hooray is a positive development, since the exclamation more usually associated with tinkers is damn.
The book that introduced tinker gnomes had the very St. George-esque title Dragonlance Adventures.

The "2021" in the upper right-hand corner of the book cover is not a year (the book was published in 1987) but a serial number -- D&D book #2021. The fact that it matches the current year is a coincidence. Notice also that the letter O in the title is stylized as ☉, the astrological symbol for the Sun.
The name of Tintin's dog (in English) is Snowy (one of the Weather Dogs!) -- a link to Lorenzo Snow and thus to St. George. (Incidentally, Lorenzo Snow was born in 1814 and became President of the Church in 1898 -- both of which are Years of the Dog on the Chinese calendar.) Commenter Mr. Andrew informed me of another dog-name connection: On April 20, just three days before St. George's Day, Owen Benjamin did a livestream, and one of the topics was "George fights a dragon." In the title graphic below, that phrase is even followed by a +, suggesting the sign of the Redcrosse Knight. 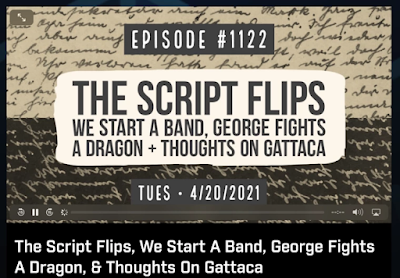 Mr. Andrew explained, "Owen's dog is named George (really) - and the dragon reference was just a kite. Has absolutely nothing to do w/ St. George (Catholic or Floyd variety) - just a little coincidence/synchronicity at the same time."
Thinking about dog names, I realized that Snowy begins with Sn, the symbol for tin. Then I remembered that there was a famous dog named Rin Tin Tin -- whose name is so similar to Tintin that Wikipedia is afraid people might confuse the two.

The Wikipedia article on Rin Tin Tin has pictures of seven movie posters featuring that dog. The second of them has a "snowy" theme. (The plural, "snows," suggests "Snow Snow" and the two Snows -- Lorenzo and Erastus -- for whom Snow College is named.) 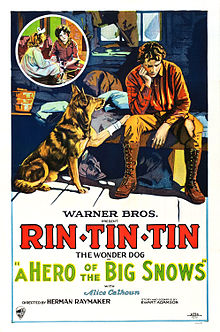 And the third shows Rin Tin Tin wearing the Cross of St. George -- tying in with Owen Benjamin's dog named George who "fought a dragon." 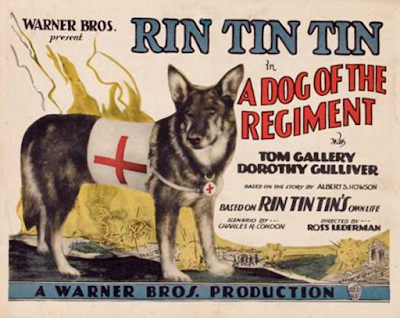 My late uncle Mike was an amateur singer/songwriter and guitarist, and near the end of his life he put together a CD called George: Twenty Years in the Making -- a reference to the first song he wrote as a child, which was about a dog named George who could dance on his hind legs. It begins thus:

Got a dog, his name is George
He followed me home from school
He's the coolest dog in this whole world
'Cos he dances like a fool

What kind of dog dances on his hind legs "like a fool"? A snowy one, of course! 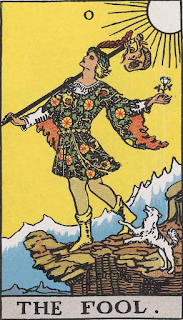 (Note that in this post I connected the Rider-Waite Fool card with George W. Bush.)
Which brings us to alligators. (I know, I know, you've been thinking, "When's he going to get to the alligators?" Don't worry, here they come!)
Fun fact: Not only do some Tarot decks feature a crocodile on the Fool card; certain French esotericists went so far as to name the card Le Crocodile!

According to David McCann (hmm, can = tin, right?) in this interesting thread, "The idea comes from Paul Christian, who actually called the card The Crocodile: 'The crocodile is the emblem of implacable fate and inevitable expiation.'" This fits in with our theme of "inevitable miracles."
The thread I've just linked to also contains some discussion of the crocodile's role in Punch and Judy shows and in Peter Pan. A user called Mallah writes, "I also think of Captain Hook's fear of the Crocodile with a ticking clock within. Time comes to swallow him up...his time has come."
Speaking of Peter Pan, a "tinker" is specifically an intinerant tinsmith, one who would have traveled around with a knapsack like the Tarot Fool -- so what is the Fool wearing on his clothes if not tinker bells? 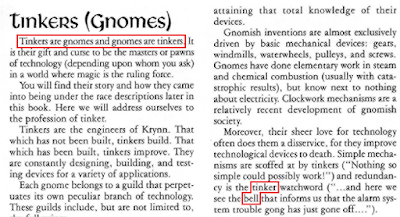 Also, isn't Captain Hook a bit reminiscent of Captain Haddock? (Besides the phonetic similarity, there is the obvious relationship between hooks and fish.) In Prisoners of the Sun, Tintin rescues Captain Haddock from an alligator -- right after the Captain says of alligators, "They don't fool me"! 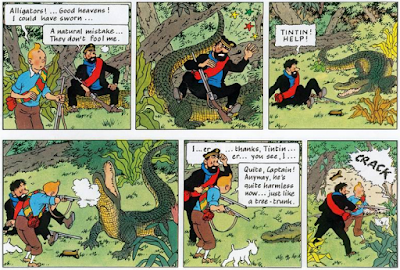 I have mentioned (here) the email I received mentioning St. George in the same breath as "DMT entities." In my reply, I wrote:

When I wrote above that "synchromystics took note of" the connection between 50/50 and Tintin in 2011, I was thinking of the blog g8ors.blogspot.com ("gators"), though I haven't been able to track down the exact post.
The alligator also ties us back into a sync theme from a few months back: the Jimmy Driftwood song "Battle of New Orleans," which humorously describes Andrew Jackson's forces using an alligator as a cannon. (The line "the gator lost his mind" also ties into the Fool/crocodile connection.) Although the Battle of New Orleans took place in early 1815, the song "Battle of New Orleans" begins "In 1814 we took a little trip." The phrase "took a little trip" is a nod to the DMT/Terence McKenna theme, and 1814 is the birth year of Lorenzo Snow.
Since the Tarot has come up, I should also mention that St. George's cross is featured on the Judgment card, which I have discussed extensively as a prophecy of Donald Trump's winning the 2020 election. I have also discussed the 19th trump, The Sun, as a prophecy of the birdemic -- which gives a whole new meaning to the title Prisoners of the Sun. In fact, the correspondent who sent me the Tintin scan that started this whole sync cascade was using it to make a point about the birdemic:

The eclipse corresponds to the "deadly birdemic", and Tintin's god-like powers correspond to the peck. Now that most people are pecked, all They need to do is reduce media coverage on the "cases" and make out as if the peck has saved the day. The birdemic will vanish (miraculously), and they will then write history according to their narrative, using it as artillery in the pro-peck propaganda war as an example of how effective GM pecking is.

That's a lot of connections. Interesting that it also connects with the earlier chain as well (Battle of New Orleans).

The crocodile bits jumped out at me as the prior day I'd just read Shelley's "Mask of Anarchy":

Clothed with the Bible, as with light,
And the shadows of the night,
Like Sidmouth, next, Hypocrisy
On a crocodile rode by.

Serhei, the only lines from that poem that I know from memory are the ones Curtis Yarvin quoted back when he was Moldbug:

I met Murder on the way -
He had a mask like Castlereagh -
Very smooth he looked, yet grim;
Seven blood-hounds followed him;

So, that's a link back to the Bloodhound Gang, isn't it?

My preferred image of the trio is actually Fraud. I think the trio of Destructions is fairly inspired, the rest of the poem feels like revolutionary pablum.