There's a certain hostility in my online circle to the observance of New Year's Day -- an arbitrary date, corresponding to nothing in astronomy or history or religion, and therefore "nihilistic" -- but I've always liked it for precisely that reason. The Kalends of January, representing nothing other than the passage of another year, allows us to focus on that and that alone, looking back on the year just passed and forward to the one just beginning.
I say the day has no religious significance, but this is not entirely true. It is the Octave Day of Christmas and as such marks the circumcision of Christ -- the day he underwent the ancient Abrahamic rite and was given the name Jesus, after the great warrior who was Moses' successor, leading Israel into the promised land where Moses himself could not go. (The original Jesus was, appropriately, called the "son of Nun" -- meaning "son of the Fish" in Hebrew, but in English also suggesting "son of the Holy Virgin" and "son of no one.") Is there not something of Janus in this event, looking back to the ancient Patriarchs and forward to the transcending of the religion of Moses?
This year, though, the Kalends has another primary meaning for me. It was one year ago today that the Maid of Heaven, known to history as Joan of Arc, manifested herself to me, twice in one day, with overpowering spiritual force. I had been anticipating a possible repeat of that experience -- as the Angel Moroni appeared to Joseph Smith on the same day for four consecutive years -- and I was not disappointed. It was a good deal subtler this time, though, and seemed to come not from some external Heaven but from within my own heart -- but it was still unmistakably her: a subtle whisper that said, "Yes, I am still here with you, but softly now. After the earthquake, a still small voice."
It was she who drove me up the Mountain of the Eight Trigrams and had me spend the first day of the year in a Buddhist temple, of all places. There, one of the old warrior gods, drawn sword in his hand and finger raised before his lips, reinforced her message of "softly now." 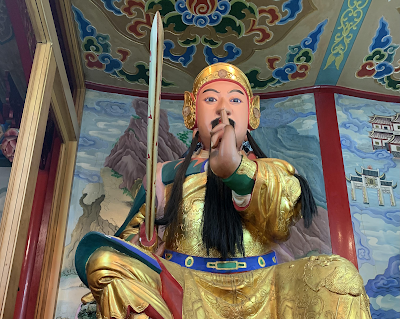 This is not an injunction to secrecy, but something else. The synchronicity fairies had seen to it that, less than hour before entering the temple, I had read these words from one of Whitley Strieber's strange visitors: "Form an assault on secrecy. . . . It is the greatest present evil," and "Human life is about freedom, and secrecy is the murderer of freedom."
(These lines are from a strange little book called The Key, and the key is one of the attributes of Janus, whose Kalends this is. According to René Guénon, Jesus Christ has sometimes been represented in the form of Janus because he is called in the old liturgy the Key of David -- an appellation ultimately deriving from Isaiah, 22nd chapter, 22nd verse.)
Why the Maid?, I've often asked myself this year. Of all the saints and angels and resurrected beings who could have taken an interest, why her? She is such an anomalous saint, so superlatively holy and yet devoted to a mission that seems so secular and political. Why was someone like her chosen for such a worldly mission as the liberation of France from the English? And why has she returned now, in an era when any involvement in politics seems like a spiritual death-trap, when one would have thought someone like St. Anthony the Great would have been more appropriate?
Joan was born among a French people who were no more holy than les goddams, as they called the habitually profane English, and she made them holy -- some of them, anyway, enough to make a difference. She drove the whores out of the camp, sent the soldiers to Mass, and transformed thousands of souls by the sheer force of her personality. I suppose that, rather than the military and political consequences that followed, was what really mattered.
Elsewhere in The Key, Strieber asks his visitor, "What is the most important thing that Christ said?" The answer: "The most important thing that Christ said was 'be as the lilies of the field.' It is a message for the next millennium" (this was in 1998). This seems to be enjoining a sort of passivity that is opposite of the warrior spirit of the Maid -- and yet at the same time it is a synchronistic link to her. "I had a standard," she said at her trial, "whose field was sown with lilies. There was a figure of Christ holding the world and on each side of Him was an angel. . . . Written above: Jhesus Maria."
In writing this post, I was unsure whether calends or kalends was more correct, which led me to the Wikipedia entry for that term. In explaining how the Romans reckoned dates, it said, "For example, April 22 is the 10th day before the calends of May." April 22 is a date that has significance for me for personal reasons, so I thought it a minor coincidence that it had happened to be chosen as an example. Then, when I wanted to quote the Maid's description of her banner, I searched my own blog for lilies, which turned up not only the post I had been looking for ("The first rainbow flag") but also "I have enough water lilies, I need more crocodiles" -- a post about Roger Anthony in which I note that he died on April 22, 2014. Anthony's name also syncs with my passing reference above to St. Anthony the Great, mentioned as a saint very different from Joan, just as Anthony contrasts the crocodile with the water lily. (In Flaubert's novel about St. Anthony, the saint sees "crocodiles playing upon lyres" on the walls of the pagan temple in Heliopolis; I myself just spent the day in a pagan temple, and lyre-playing aquatic reptiles sync with Mr. Icthus-Oress.)
It is traditional to see in the New Year a new beginning, a dawning. Whatever personal dawn we might experience this year, though, it will take place within the larger context of the long sunset of our dying civilization. Softly now . . .

Softly now the light of day
Fades upon my sight away.
Free from care, from labor free,
Lord, I would commune with thee.

As all dies that can die, and all burns that can burn, distractions fall away and we find ourselves, in the midst of this unfolding apocalypse, "free from care, from labor free." Only God remains, and God's.

Who shall separate us from the love of Christ? shall tribulation, or distress, or persecution, or famine, or nakedness, or peril, or sword?
As it is written, For thy sake we are killed all the day long; we are accounted as sheep for the slaughter.
Nay, in all these things we are more than conquerors through him that loved us.
For I am persuaded, that neither death, nor life, nor angels, nor principalities, nor powers, nor things present, nor things to come, nor height, nor depth, nor any other creature, shall be able to separate us from the love of God, which is in Christ Jesus our Lord.

Email ThisBlogThis!Share to TwitterShare to FacebookShare to Pinterest
Labels: God, Janus, Joan of Arc, The end of the world as we know it, The highway is for gamblers, Whitley Strieber