If you had asked me an hour ago who Michael Stipe was, I wouldn't have been able to tell you. He's the frontman for R.E.M., a band of which I have never been a huge fan and about which I know relatively little. I know a handful of their songs, and I think I owned one of their albums back in the nineties -- Green, I think -- but that's about it.
I had lunch in a café today, and the background music consisted of slowed-down "smooth jazz" covers of various pop songs. I didn't pay much attention to it until the female vocalist started crooning "Fi-re . . .  fi-re . . .," and I thought I recognized it as an R.E.M. song, though I wasn't sure which one. My first thought was that it was “Pop Song 89,” and that I would soon hear the memorable lines, "Should we talk about the weather? Should we talk about the government?" It soon became clear, though, that it was "The One I Love." I knew the song but had never realized that the word repeated in the chorus was fire. This obviously changes the whole meaning of the song, since it implies that  "this one goes out to the one I love" refers not to the song itself but to a bullet. It's not a love song; it's a song about murder or suicide -- and turning it into a mellow "easy listening" (and therefore clearly enunciated) number actually makes that clearer!
Curious about the rest of the lyrics, I got out my phone and googled them. It was in these search results that I learned the singer's name was Michael Stipe and that my understanding of the implication of fire was correct.

Speaking to Mojo in 2016, Stipe said that he wasn't at all dismayed that so many people misinterpreted the sarcastic and spiteful lyrics as a straightforward love song. "I didn't like the song to begin with," he explained. "I felt it was too brutal. I thought the sentiment was too difficult to put out into the world. But people misunderstood it, so it was fine. Now it's a love song, so that's fine."

Then, since I had my phone out and everything, I thought I'd check a few blogs. This is a bit uncharacteristic -- I much prefer browsing on a computer -- but it's what I did, and as the sync fairies would have it, the very first post I read was one from Andrew Anglin about the appointment of Hakeen Jeffries as the leader of the Democrats in the U.S. House of Representatives. Due to Mr. Jeffries' somewhat badass physiognomy, Anglin kept referring to him as "stone-cold" and making allusions to "heel" wrestler Stone Cold Steve Austin -- but right at the end of the post, he compared him to someone else instead: 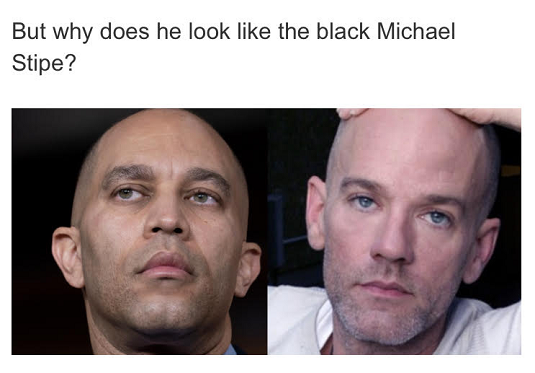 If I had not eaten at that café and googled that song, I would have had no idea who that was, even with a photo.
The use of the expression "Black Michael" -- after several Stone Cold Steve Austin references -- was also synchronistically interesting, given the Mormon doctrine that Michael and Adam are the same person. The other famous pro wrestler with a mineral moniker, Dwayne "the Rock" Johnson, recently starred as the title character in a movie called Black Adam.
"Black Michael" also reminded me of Mike Tyson's nickname "Iron Mike" -- since black can refer to iron, as in blacksmith. Ages ago I read an article that referred to "Evander Holyfield singing 'Glory to God' before going into the ring to face Iron Mike" -- and for some reason that line has stuck in my memory all these years, though I've completely forgotten whatever article it was part of.
Anglin wrote, "I would like hear him say 'and that’s the bottom line -- because Hakeem Jeffries said so'" -- alluding to a famous Steve Austin quote. Here's the context:

Hendrix: The fourth prestigious King Of The Ring, Stone Cold Steve Austin, an incredible victory!
Austin: The first thing I want to be done, is to get that piece of crap out of my ring. Don't just get him out of the ring, get him out of the WWF because I've proved son, without a shadow of a doubt, you ain't got what it takes anymore! You sit there and you thump your Bible, and you say your prayers, and it didn’t get you anywhere. Talk about your psalms, talk about John 3:16. Austin 3:16 says I just whipped your ass!
Hendrix: Come on, that's not necessary
Austin: All he's gotta do is go buy him a cheap bottle of Thunderbird and try to dig back some of that courage he had in his prime. As the King Of The Ring, I'm serving notice to every one of the WWF superstars. I don't give a damn what they are, they're all on the list, and that's Stone Cold's list, and I'm fixing to start running through all of 'em. And as far as this championship match is considered son, I don't give a damn if it's Davey Boy Smith or Shawn Michaels, Steve Austin's time is come, and when I get that shot you're looking at the next WWF Champion. And that's the bottom line, because Stone Cold said so.

Austin's ridicule of his opponent's religiosity resonates with "Evander Holyfield singing 'Glory to God' before going into the ring to face Iron Mike."
at December 01, 2022

The name "Stephen" (and its common variant "Steven") is derived from Greek Στέφανος (Stéphanos), a first name from the Greek word στέφανος (stéphanos), meaning 'wreath, crown' and by extension 'reward, honor, renown, fame', from the verb στέφειν (stéphein), 'to encircle, to wreathe'. In Ancient Greece, crowning wreaths (such as laurel wreaths) were given to the winners of contests. Originally, as the verb suggests, the noun had a more general meaning of any "circle"—including a circle of people, a circling wall around a city, and, in its earliest recorded use, the circle of a fight, which is found in the Iliad of Homer.


William,
I had another very intriguing sync today concerning
Comets .

These type of weird syncs seem to cross my path when I begin doubting myself and thinking that maybe I'm wrong, and all of this weird stuff that happens to me and that I research about, maybe it doesn't mean anything at all and maybe it's just 'mumbo jumbo'.

However the sync Faries always seem to make sure that I mentally get back on track
because today this happened:

A 2016 low budget movie titled " Prepper" randomly appeared on my youtube feed.
The movie is about a 'what if/ End of the World event contemplated by the protagonist James, a school teacher, who begins connecting the dots sparked by the Ebola virus outbreak in Africa (the movie takes place in 2016 in the US)

In the movie there is a scene where the protagonist James, is wearing a blue T shirt with the word Comet Pride.

The 2016 movie is titled a comedy, and although there are several lighthearted 'tin foil' references and 'jabs' at people who are aware of the changing of the landscape i.e. Preppers, there is also some very interesting, perhaps predictive programing information in this movie as well which is happening on the World Stage today.
Keep in mind this movie was released in 2016.

I've never seen this low budget movie before nor would have I ever looked at it, but I decided to look at it today and lo and behold a Comet reference.

Several hours later after looking at the movie, and while I was browsing the internet (not just YouTube) I 'stumbled across yet another interesting 'sync' which appeared in my
news feed
which is this article below:

Which in that article lead to me finding this:

I don't know if you're familiar with the Coincidence Project, but I thought of you
when I 'stumbled' upon it.


Here's the link to the movie and by the way,I absolutely mirror the protagonist James'
theory and perspective and I not only mirror much of what James says, but also how he connected the dots(puzzle pieces ) to a very VERY probable future, which I've commented before many times on your blog.

(note James' Blue Comet T shirt, which can be seen beginning at frame/marker 26;24 )