In a comment posted on November 6, Debbie linked a video of a CBS news bulletin announcing the shooting of John F. Kennedy, followed by a coffee commercial.

Yesterday, I posted about how Google only returns a few hundred results for any search, even though it claims to have millions. In connection with that, I ended up watching a video called "Where Did the Rest of the Internet Go?" from a channel called Truthstream Media, by Aaron and Melissa Dykes.

This led me to check out other things on their channel, and today I began watching their 3-hour documentary "The Minds of Men."

Starting at the 2:10 mark, it plays the end of the CBS bulletin about the JFK assassination and the beginning of the coffee commercial following.

The JFK/coffee clip came in the middle of footage of someone typing a letter dated June 25, 1964. I had a nagging feeling that June 25, or the number 625, had some synchronistic relevance, but so far I can't figure out what it might be. Searching my own blog for that number turns up only my mathematical posts (on beta diversity and figurate numbers), where it appears as just another number.

Now, having typed that, suddenly I know: June 25, 1964, was the date of a total lunar eclipse, or "blood moon." For my November 9 post "Once in a red moon," I had counted all the total lunar eclipses since June 1946, and while I can't consciously remember any of the eclipse dates I looked at, I suddenly feel absolutely certain that there was an eclipse on June 25, 1964. Well, let's check. 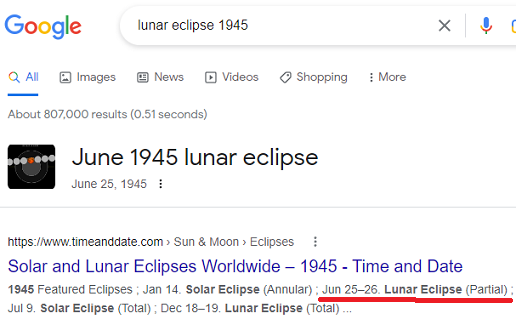 Well, how about that? It was a lunar eclipse, but a partial one -- so it wasn't on the list I looked at, which only listed total lunar eclipses. So how did I know about it?

But now I realize that I typed in the wrong year: 1945. and I know why: Earlier in the video, at the 0:29 mark, the year 1945 is displayed, as the date of the United Nations Conference on International Organization in San Francisco. I accidentally got the two dates mixed up. How weird that it still ended up being the date of a lunar eclipse!

So I put in the correct date, and -- lightning proceeds to strike twice in the same place: 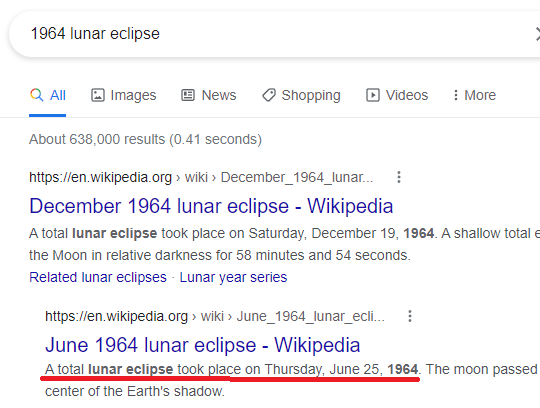 Incidentally, why did the number 1945 stick in my mind enough to make me google the wrong date? Because I had just listened to the Jay-Z track "Encore," where he says, "When I come back like Jordan, wearin' the 4-5, it ain't to play games witchoo"; elsewhere on the same track he raps "I came, I saw, I conquered," and just as I listened to that line a girl walked past wearing a black T-shirt with "Veni Vidi Vici" in white letters." Of course, 45 is also the number of Trump, who was born on a Blood Moon.

Actually, it wasn't the original "Encore"; it was the mashed-up-with-Linkin-Park version. When I'm in a certain frame of mind, I really dig this stuff.

I don't know who thought these two songs would go well together -- Chester's all "I'm at the end of my rope and can't take much more of this," and Jay be like "Can I get a encore? Do ya want more?" -- but it sort of works. Kind of a Veteran Cosmic Rocker vibe.
⁂
Note added: I just noticed that I happened to post this in the early hours of November 22 -- the anniversary of JFK's murder.
at November 22, 2022

I remember it was cold and my sister and I running home from school( which school let out early that day after announcing on the intercom system that President Kennedy had been shot.

When my sister and I got home of course the black and white console TV was on and my mother and aunt and grandparents were in the small living room looking at the news reports.
This was about 2 o'clock EST ( our normal school day was until 3:00 ).
Kennedy was shot about 12:30 CST.

I don't recall seeing the Nescafe commercial of course at that time, but the entire
vibe/energy in the Black neighborhood was very surreal.

You might want to check out the video (link below ) as all of the original footage of the news reports is presented in the video. The video is 6 hours long and I haven't looked at all of the video yet, but it's interesting how much of the original news reports
given at that time, doesn't support, AT ALL, the Warren Commission's """Official"""" narrative of the assassination.

Interesting how much we DON"T know..


The JFK Assassination As It Happened from NBC News Archives
https://www.youtube.com/watch?v=eB9am3HGQs0

I forgot to add this : please read my last and recent comments to you on your post: Challenge: Find any search string that returns more than 500 Google results .

If you see the movie, note at the very end, the Blood/Red/Orange moon.

Also, I had a very interesting dream in 2018 I titled Red Rubber Ball.

Check it out. This is a copy and paste from my dream journal archives.

I had an interesting dream today…. The dream is as follows..

I can’t recall all of this dream, but I think Marshall and I were planning to buy or build a new house and we went to the open house .
The sellers were there. At one point I saw a bright deep red glowing ball in the sky and I told the sellers of the house that it was the aliens, as I felt that the scenario had happen before ( that is, the red ball coming to earth and the aliens visiting me ).

Sure enough that’s exactly what happened again. The red ball fell to earth and aliens came to the house where Marshall and I were.
I really can’t describe how the aliens looked. They were not little green men.
I felt as if they cloaked themselves to look like humans, as I really can’t recall be frightened by the way they looked, but mostly feeling afraid of their power.

The aliens handed me some type of device and told me to push the button. I hesitated and ask them questions of what would happen and they said that nothing much , but for some reason I didn’t believe them and I hesitated pushing the button.

They said if I didn’t push the button, it would be very bad for other people and myself. Again I hesitated. At one point, they informed each other that something had happened to their equipment and they had to leave and they left.
For some reason a few of them stayed behind in the house although I don’t know why.
I woke up

Now I see what they did there, 59 years later.

You're into the cards, lately I have been into anagrams.

Few can be new mutineers.
We few tribesmen nuance.
We encumber a news feint.