Today, following some links led me back to my own August 24 post "Michael the glove puppet and X the Owl." I noticed this comment by WanderingGondola:

Has this post been exhausted yet? Nope. (A recent comment there: "If Jordan Peele doesn't use this as a sound effect, we riot.")

This reminded me that, despite all the syncs leading up the release of the Jordan Peele film NOPE, I never actually got around to watching it. I thought I'd peruse the plot summary on Wikipedia and see what it was about. When I opened the Wikipedia page, though, I first clicked on "Reception" to see if people had generally thought it was good (they had, natch), and then I started pressing "Page Up" to get back to the plot. Two page-ups took me to the soundtrack listing, though, where the title of the third track arrested my attention: "La Vie C'est Chouette." I wondered what chouette meant. Well . . . 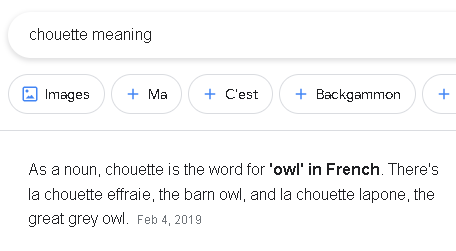 Although "owl" was the meaning highlighted by Google, chouette is apparently much more commonly used as an adjective, meaning "nice, pleasant," and that is how it is used in the song, by Jodie Foster. When I looked up the lyrics, this bit got my attention:

Qui, unlike our English who, doesn't sound like owl onomatopoeia, and the possibility of a deliberate bilingual pun seems remote.
I was led to this song by my post about Michael and an Owl. When I first linked Michael and the owl, in "The Locust Grove crop circle," it was through the word qui:

If the serpent is the Metal Worm, who is Michael? He's Mr. Owl, of course. In the de Vos painting of Michael, written around his hand is the Latin motto Qui ut Deus? -- a translation of the literal meaning of the name Michael. In English, it would be Who is like God?

Email ThisBlogThis!Share to TwitterShare to FacebookShare to Pinterest
Labels: French, Jodie Foster, Jordan Peele, Michael the Archangel, Owls, The highway is for gamblers

Did you know that Saint Michael, Archangel, Prince of the Heavenly Host, once poked a hole in a man's head because he got ticked off with him?

That one went over my head, ben.

I remember right around the time you had started posting owl syncs, I was looking at the libretto for Mozart's Marriage of Figaro and was struck by a (to me) odd reference to owls ("civette") in "Aprite un po'quegli occhi". In the context of a general warning/rant regarding the untrustworthiness of women, there's a passage that goes:

So the comparisons start with "Witches/Sirens/Owls/Comets". Apparently "civetta" also means "flirt, coquette" in Italian, which I've never thought of as a particularly owlish characteristic.

I'd briefly considered commenting at the time; the mention of "chouette" here reminded me.

Incidental Disclaimer: Despite the name, I'm not much of a French speaker.

Civette che allettano -- "little owls that entice" -- what a strange turn of phrase!

One of the definitions given for chouette is femme âgée, méchante et désagréable, "a mean, old, disagreeable woman," which makes much more metaphorical sense.

Etymolgically, comet means "long-haired" and was sometimes an epithet of Aphrodite, so I suppose it makes sense in the context in which Mozart places it.

Owls are also associated with a Mesopotamian image of a naked woman who may be Inanna or Lilith, and to whom archaeologists have given the rather Mozartian moniker "Queen of the Night."