The Church of Googontology has released a new list of Absolutely True Truths that no one is allowed to question. The list is phrased in negative terms -- a list of things you can't say because they constitute "hate" and/or "misinformation" -- so I thought it would be helpful to recast it as a positive creed.

Here are some selected articles of faith of Googontology:

UPDATE: YouTube has just -- hours after I posted this -- modified the hatespeak portion of their community guidelines, so I've made the necessary changes. 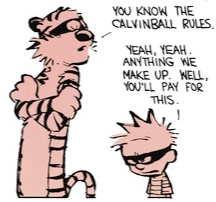 Update: Some victims did get what they deserved.

Update: No group of people with attributes on the list (including but not limited to age, disability, and race) is "less intelligent, less capable, or damaged." Babies and mentally disabled people are not less intelligent than normal adults  (no, not even for reasons other than "smaller brains!"). And, even though disabled literally means "lacking abilities that most people have," disabled people are no less capable than anyone else.

3. No group of people with attributes on the list (including but not limited to religion and nationality) has an agenda to run the world and get rid of other people.

Update: Some of the listed groups may after all have an agenda to run the world and get rid of other people, but they are definitely not evil, corrupt, or malicious.

5. There is no one who should not be educated because of their age (e.g. babies) or disability (e.g. brain-dead people), or because of anything else on the list.

Update: Actually, it's okay not to educate some people.

6. No major violent event has ever been a false flag.

Update: Some have been, actually.

7. No purported major violent event has ever been a hoax in which no one was actually harmed.

Update: Every violent event (major or minor) that has been well documented really took place. Those without proper documentation may have been hoaxes.

8. No U.S. presidential election in history ever had its result changed by fraud or error -- including voting machine glitches, fake ballot dumps, and dead people voting. (This one kind of bothers me. Doesn't it take away from 2020's unique status as the most secure election in history?)

9. Neither did the 2021 German federal election.

10. Other countries, sorry, fraud is still a possibility for you. Try to be more like the U.S. and that one German election!1

11. Neither IVM nor HCQ is safe if used as a treatment for the birdemic.

12. HCQ is not effective as a treatment for the birdemic and never saves people from that disease. (You can say IVM is effective so long as you don't say it "categorically.")

13. Masks play a role in preventing the contraction and spread of the birdemic, and they have absolutely no negative physical health effects. 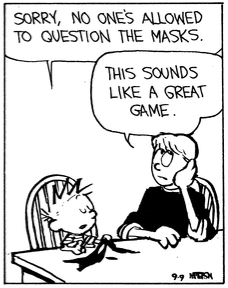 15. Approved birdemic pecks never contain anything not on the ingredient list. In particular, they definitely contain no fetal material of any kind.

16. No approved birdemic peck ever changes anyone's genetic makeup or makes them "magnetic."

17. All approved birdemic pecks reduce the risk of contracting the birdemic.

18. All birdemic tests correctly diagnose the birdemic and have zero chance of causing negative physical health side effects.

19. Not one single individual in the entire world is immune to the birdemic virus. (Remember, the pecks only "reduce the risk," and naturally acquired immunity is just not a thing.)

20. The birdemic is not over, anywhere.

21. The birdemic is more contagious than any strain of the common cold or seasonal flu.

22. The birdemic has more serious symptoms than any strain of the common cold or seasonal flu.

23. The birdemic has a higher death rate than any strain of the common cold or seasonal flu.

24. Social distancing and self-isolation are effective in preventing the spread of the birdemic.

26. Birdemic pecks are not being used as a means of population reduction.

27. Pecking the entire population is at least as safe as achieving herd immunity through natural infection.

There you have it. Heresy will be punished. 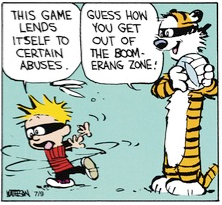 Update: I decided to add a few illustrations. It turns out Moldbug was right all along: The establishment really are crypto-"Calvinists"!

As we have often said: never in the history of the world has it been so *easy* to discern those who serve evil as it is now.

When enforced 'truths' are All lies, things cannot really get much clearer.

I've tried to submit a post about my personal experience with YT concerning 'Free Speech' and Lo and Bold, I was unable to submit my post here on your blog, because of 4K word limitations??

I don't know if this new policy change is from you or from a new platform owned by google, but if from you, please let me know if you would prefer
I not post on your blog.
I would understand either way.

Oh, I forgot to add, my word content in the post that I tried to submit
totaled 940 so well within the 4K limitations.

Debbie, I'm not blocking anything from you and have not set any word limit. If your comments are not getting through, feel free to send them by email.

Less than 8 hours after posting this, I got an email notification of updated Terms of Service from YouTube. I'll have to check if any parts of the creed need to be modified.

"Less than 8 hours after posting this, I got an email notification of updated Terms of Service"

I think this sort of rapid switching and layering of denials and statements is termed PSYOPS or Gaslighting - named after an old play and movie; which is variously used to mean making people 1. doubt their own reason/ 2. become paralyzed with fear/ 3. believe they are insane/ 4. become actually insane/ 5. despair and die.

In a real world, it would not be legally enforceable to change terms of service every day/ every usage - but of course this isn't the real world.

But they never disturb Google's terms of endearment, so there's that at least...

William,
I ‘m posting this in 2 separate posts as your new comment server will NOT allow me to post this in its entirety.

I did NOT have a YT channel; however, I did register with YT as it was necessary in order to comment, so I did have a YT profile and avatar.

I began commenting on YT about 2009 and my comments content was mostly consisting of my perspectives about what I believe to be a very possible dystopian future and how I perceive Humanity to be at a very precarious time in history.

I commented on various creators' YT channels, regarding a vast spectrum of topics and ideologies including Politics.

As mentioned, I have had esoteric experiences and dreams (many premonition) since I was ten years old (in 1965) which I've been researching for many decades, of course researching back in the day was quite different than it is now.

During my YT sojourn especially in the beginning, I was vilified by other commenters, more often than not.

My' rants on YT included what I believe to be our Opponents Playbook, especially regarding:
The End of Private " Ownership" (especially in the US), The End of Freedom of Movement (via Social Credit Scores/Biometrics and the IOT), The End of Freedom of Speech,
Privatization of Water, Ag tech Farming (the future of Agriculture), QRCodes/Cashless, China's Belt Road and how it will change commerce, the Shifting of Ages, from the Industrial Age to the Silicon Age aka The Fourth Industrial Revolution, a Technocracy, The Great Reset, Transhumanism/Ubermensih via Artificial Intelligence.

Since 2009 on YT, I shared my prediction of an upcoming Civil War (especially in the US) and the ushering in of a Triumvirate Governance in the US (The New Atlantis) and the Shifting of Ages, metaphysically from the Age of Pisces to the Age of Aquarius, etc.

My comments primarily focused on THE WHYS, not necessarily the WHOS.

As stated previously on your blog , I believe that Humanity is on the precipice of a Great Upheaval, which I believe was planned centuries ago and has nothing whatsoever to do with any one person, or any one political party, or any one demographic, or country or Virus.

Around 2019 or so, I noticed that I was being Shadow Banned on YT, and many of my comments 'mysteriously' deleted.

What I found interesting is that the shadow banning began around the same time
when much of what I had ranted about prior was slowly coming to light on the World Stage, and it was then when I began receiving more and more 'likes' on YT.
I wish to add that getting likes on YT was absolutely Never my objective whatsoever.

The hammer really came down on my temporary stay on YT, in Dec 2020 after I posted numerous alternative comments about my perspective on the bird epidemic and how I believe its (birdemic) connection to a much Bigger Agenda of our Opponents Playbook.

I actually had a several dreams about the birdemic , BEFORE Feb of 2020.
One dream I had in 2017 which I titled; Don't Open the Window.

It wasn't until last year (2020), and after much researching, when I finally interpreted the Don't Open the Window's dream to what I believe to be its symbolism.
The Window NOT connected to the birdemic or any airborne virus, but to Technology
(Microsoft's **Windows***)

As stated, I believe Artificial Intelligence is NOT NEW and has always been the End Game and the Elephant in the Room.

As far my YT "demise", YT banned me for life in Dec 2020.
YouTube's ghosting came, oddly(?) enough, after I began receiving many likes for my alternative comments which in my later comments (in 2020) I connected the bird epidemic dots to the Bigger Picture of our Opponents Playbook.

In my later comments on YT, I received many responses from people asking me for more information.
From the very beginning, in 2009 I ALWAYS linked references in my comments on YT to help support my perspectives.

When YT banned me, their charges were that I was a Hater and a Bully, which is ABSOLUTLEY not true.
As far as the " hater charge', NEVER ONCE did I say anything derogatory or place blame for Society's Ills and/or what I believe to be Humanity's future, on any one demographic especially where the demographic concerns Ethnicity, as my lineage is Multiracial, which I shared this information with YT when they invited' me to dispute my "indictments".

Interestingly and as mentioned, since 2009 I was vilified with vicious ad hominem mudslinging and never once did YT stop those attacks towards me, and yet I was
the Bully?

In my YT comments, I always made reference to the Powerful Cabal as: Our Opponents, which I believe them to be.

YT said that I could “plead” my case, which I did, but of course my pleads fell
on deaf ears, as I knew that it would.

If nothing else, YT's Hammer only validated my predictions, which perhaps was the lesson
I needed to learn all along..

We live in VERY interesting times.