Just a really weird coincidence to note.
I was searching the Internet for pictures to use as prompts in a vocabulary quiz for young children. The first three words I needed pictures for were beeswax, painting (the noun), and pressing (in the sense of "applying pressure to").
For beeswax, I found a picture of some bees on a honeycomb and wrote "Bees make their homes from ____."
For painting, I decided, for no particular reason, to use Vincent Van Gogh's Sunflowers as an illustration. I found a suitable picture of that work in a picture frame.
Next, pressing. I thought for a minute about the best way of representing that concept graphically and decided I wanted a picture of someone pressing down on an overpacked suitcase, trying to close it. I tried various search terms but couldn't quite find what I wanted (plenty of photos, but I wanted a line drawing). Finally, I searched pressing suitcase, specifying in the search settings that I wanted line drawings only. Still nothing good, so I scrolled down a bit, and this jumped out at me in the seventh row of search results: 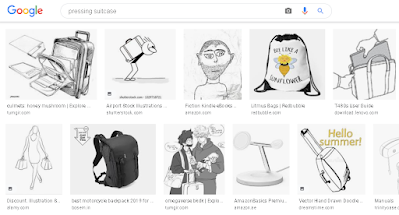 Did it jump out at you, too -- seeing as how it's not a line drawing and features neither suitcases nor pressing? 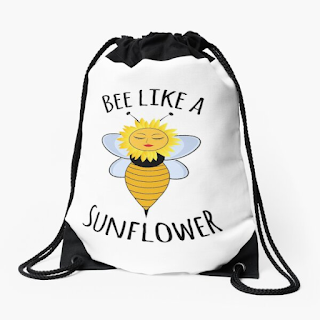 Is that a true coincidence? Maybe some arcane detail of Google's search algorithm remembered that I had just been searching for bees and sunflowers and added that to the mix when I searched for something else? I just tested this by logging out of Google, logging in with a different account, and running the search again, and I got the same results. So, yes, I think it's a real coincidence.
⁂
"Bee like a sunflower" -- because it begins with an insect/verb pun followed by the word like -- made think of "Time flies like an arrow; fruit flies like a banana."
A few years back, referring to sunflowers as "bananas" was a political thing here in Taiwan. This screenshot is from a 2014 news article called "'Sunflowers' and 'bananas': Taiwan still divided by student protest." 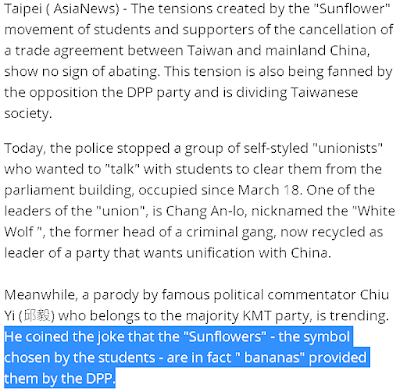 Note added: After pressing, the next word I needed a picture for was Mexican, so I found a dude wearing a sombrero and wrote, "He is wearing a ____ hat." Only later did I remember that the line "Time is flying like an arrow" occurs in the TMBG song "Hovering Sombrero."
at November 25, 2021

Email ThisBlogThis!Share to TwitterShare to FacebookShare to Pinterest
Labels: Chairlift, Do you dig what the music is saying?, Google, Taiwan, The highway is for gamblers, They Might Be Giants