Did you know that joe is a word in Dutch? 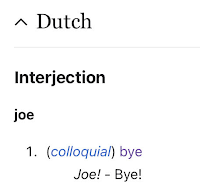 Back in 2020, Joe and Bye were closely associated.

At the time, this bumper sticker meant that "Don" was not the stickee's president and needed to be ousted by "Byedon." Now, the most natural reading is, "Biden: Not my president," respelled so as to suggest Bye! (Joe!), and the -don ending is as likely to make one think of Brandon as of Trump, who has never really gone by Don anyway.
In other onomastic news, Trump has a new, not-very-catchy nickname for Mitch McConnell (etymologically a "Big Bad Wolf" name, incidentally). 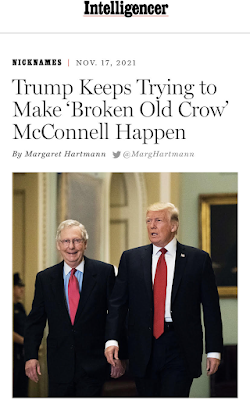 As Margaret Hatmann says in the Intelligencer article, this is a big step down from Crooked Hillary, Lyin' Ted, and Sleepy Joe, and it flies in the face of the universally accepted fact that McConnell resembles a turtle, not a crow. Why the need for a corvid nickname, even one that doesn't really fit? It fits with my own nickname for Biden, Slow Joe Crow. Merrick Garland is part of the same pattern: the ancient Greek word for "wreath, garland" is κορώνη (the source of the Latin corona). The ancient Greek word for "crow"? Also κορώνη.
"Old crow" in Chinese is 老鴉 (lǎoyā) -- which is pronounced exactly the same as 老鴨 (lǎoyā), literally "old duck," but also the Chinese name for Donald Duck -- 唐老鴨 (Táng Lǎoyā), literally "Don Old Duck," the 唐 (Táng) character being the same one used to transliterate the first syllable of the name Donald. Thus is the Donald himself connected with the idea of an "old crow."
at November 19, 2021