Certain biblical figures have their counterparts in the starry sky, though it sometimes takes some ingenuity to recognize them. John P. Pratt, for example, identifies Simon Peter with the constellation Cygnus because the pricipal stars of Cygnus form the Northern Cross asterism, with the Swan's head being the base of the Cross, and Simon Peter was crucified upside down, with his head at the base of the cross.
John the Baptist's asterism is, obviously, the Big Dipper -- baptize coming from the Greek word that means "to dip." In Britain, the Dipper is called the Plough, but this also fits. Jesus compared himself to a sower, and John prepared the way for him. The most important thing about this asterism, though, is the way it points to the North Star. Polaris, appearing from Earth as a central, unmoving star around which all the others revolve, makes for an apt symbol of Christ; and John, who said, "Behold the Lamb of God," is often represented in art as literally pointing to Christ or to a symbol of Christ. 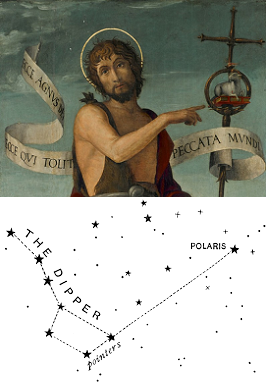 Note that in the painting above, the cross is placed at the top of a circle. This is the familiar globus cruciger imagery, symbolizing Christ's dominion over the whole Earth -- imagery which places the cross at the North Pole and thus associates Christ with Polaris.
It is also appropriate that Polaris is part of the Little Dipper asterism. Luke represents John as being Jesus' elder cousin, i.e. related to Jesus but "bigger."
The Big Dipper asterism is part of the Great Bear constellation. Here is how the Fourth Gospel introduces John.

This could be dismissed as nothing but a bit of meaningless homonymy in English, but consider how John is described in Matthew and Mark: as wearing a hairy garment and eating wild honey. Is this not ursine imagery?
I have noted before that when Jesus said that he would give no sign but the sign of Jonah, this could have had a double meaning, because Jonah means "dove." After writing my "John the Drowner" post, I realized that Jesus' baptism -- the occasion at which the sign of the dove appeared -- specifically echoed the story of Jonah. Just as Jonah asked to be thrown overboard into the sea, in the expectation that he would be drowned, so Jesus yielded (as Roger Hathaway put it) "to the flood of drowning water." Whether or not John literally held Jesus underwater until he almost died, as Rupert Sheldrake speculates, the symbolism is certainly there. The "sign of the prophet Jonas" was thus enacted in two different ways at Jesus' baptism.
I have also recently connected Jonah's whale with the bear, comparing Jonah to Little Red Riding Hood who was swallowed by the "big bad wolf" (bear) but came out alive. I also mentioned Darwin's much-ridiculed story about seeing a bear swimming around with its mouth open catching insects and  speculating that whales may have originated in some such way. Darwin thus connects the whale not only with the bear but specifically with an insect-eating bear -- suggesting the insectivorous John, who supplemented his diet of wild honey with locusts.
⁂
Note added: An old slave song refers to the Big Dipper as the "Drinking Gourd," so there's another Jonah connection.

And the Lord God prepared a gourd, and made it to come up over Jonah, that it might be a shadow over his head, to deliver him from his grief. So Jonah was exceeding glad of the gourd. But God prepared a worm when the morning rose the next day, and it smote the gourd that it withered (Jonah 4:6-7).

Note that Jonah's gourd was "over his head" like the stars and disappeared "when the morning rose the next day," also like the stars. Not that I think the author of the Book of Jonah had stars in mind, of course; it's just another synchronistic link.
at November 29, 2021

Email ThisBlogThis!Share to TwitterShare to FacebookShare to Pinterest
Labels: Astrology, John the Baptist, The highway is for gamblers

This may be a bit off topic for this particular thread, but I just found
this intriguing information while doing a bit more research about the name Rudloph.

I think you will find this information intriguing.

As I'm sure you know and as research tends to do, one bit of information sometimes 'connects' to another and then
another, and then another, ect.

If you recall I shared with you recently a dream I had in Feb.2015.
I titled the dream ; Where's My Horn?

Today, while reading an article about the name Rudloph and its connection to Rudolph the reindeer,
I found this very intriguing information about Steiner and the Horn and Antlers.

On the Sheath of the Preparation
On the Sheath: Lecture One: Horn and Antlers
https://wn.rsarchive.org/RelAuthors/KoenigKarl/OntheSheath/19471002p01.html

I also found this about
THE GJALLARHORN.

Until today, I had no idea WHATSOEVER of The GJallarhorn, and reading the article
just a bit, I wonder if there is a connection to the Gjallarhorn, the Norse Ragnarök and the Great Reset and the GREAT Upheaval (which if you recall I shared with you an esoteric experience I had in 1974 where a past life reader (whom I did NOT KNOW) told me about my Soul incarnating in times of Great Upheavals).
Recall that esoteric experience I shared with you in my previous email?

I think there's a connection.
Check out this excerpt from a wiki article about Ragnarök.
Note the Wolf Age reference:

"The völva describes the state of humanity:
Brothers will fight and kill each other,
sisters' children will defile kinship.
It is harsh in the world, whoredom rife
—an axe age, a sword age —shields are riven—
a wind age, a wolf age— before the world goes headlong.
No man will have mercy on another."


Oh, I forgot to add.
In the Ursula Dronke Translation about Ragnarok, there is mention of a: Wind Age

As mentioned, several times, I believe we are shifting Ages from the Industrial Age
to the Silicon Age and metaphysically the Age of Pisces
to the Age of Aquarius.