In my November 23 Magician's Table post "Four rams' heads," I discussed Amun in his character as Zeus Ammon and particularly as the four-headed Ram of Mendes (Banebdjedet), and I mentioned ancient coins that depicted a horned Alexander.

Alexander the Great, a prototype of the "emperor" figure, was supposed to be the son of Zeus Ammon, and ancient coins depict him with ram's horns. (The personage called the "two-horned man" in the Quran is generally believed to be Alexander.)

On November 26, Chris Knowles at The Secret Sun (who I'm pretty sure does not read my blogs) posted "He Walks Ammon Us: Egypt's Restoration Ritual at Luxor," writing that

the big daddy of the gods is Amun, AKA Jupiter Ammon, AKA Banebdjedet, AKA Baphomet, AKA you name it. All the same thing, really: the Horned and Hidden God of kings and conquerors.

If you're wondering about the Baphomet connection, the modern goat-headed Baphomet figure (as opposed with the severed head supposedly worshiped by the Templars) was invented by Éliphas Lévi and associated by him with the "Goat of Mendes" -- i.e., Herodotus's distorted account of Banebdjedet, who was properly the Ram of Mendes. Knowles goes on to mention Alexander as the "two-horned man" of the Quran, and then he offers this interpretation of "Ye cannot serve God and Mammon."

This is another one of those hiding-in-plain-sight kind of deals that eluded scholars looking for something more contrived. But it's very simple: Jupiter Ammon was on all the coinage that Jesus and the Apostles would have been familiar with. It was rendered "Mammon" as was typical of the transliteration of the time.

Well, no, I don't think adding a random M to the beginning was "typical of the transliteration of the time." Nor is it true that "Jupiter Ammon was on all the coinage" in Jesus' time. When Jesus held up a Roman denarius and asked, "Whose is this image and superscription?" they answered, "Caesar's." I have looked at many pictures of denarii from the reign of Tiberius, but none of them feature the horns of Ammon. But even if some of them did have horns, it's pretty clear that Jesus and his contemporaries thought of the bloke on the coins as "Caesar," not "(M)ammon."

In my post "John, the Bear Witness," I connected John the Baptist with the Great Bear constellation and mentioned that pun I used as a title: It is said in the Fourth Gospel that John came "to bear witness." The Greek word for "bear witness" is marturese (whence martyr), and it occurred to me that if you dropped the initial letter, it looked a lot like Arthur or Arcturus ("bear" names both) -- but the connection is a stretch even by my standards, so I didn't mention it in the post. Later I find Knowles doing exactly the same thing, even the same letter.

Actually, come to think of it, Arabic at least does form words by prefixing m- to a root (Muslim from Islam, maktab from kataba, etc.). Is there anything similar in Hebrew or Aramaic? (A pseudo-example from English would be meat, originally meaning "food," from eat.)

After writing part of this post, I had to go to work. While on the road, I was thinking about the idea of a horned god and how it contrasted with the Elizabethan use of horns as a symbol of cuckoldry and a mark of shame. I remembered how back in 2020 Francis Berger had posted a photo of himself sitting in front of a deer-antler trophy so that he appeared to have antlers coming out of his head, and how I had commented about the Elizabethan meaning of such. This led me to thinking about the white stag and how Frank had adopted it as a sort of personal symbol.

Just then I turned a corner and saw that a new billboard had been put up -- showing an enormous white stag with a crow or raven perched on either antler. So, that was weird.

Looking up Frank's old post now, I find (which I had not remembered!) that in the comments we even talk about rams' horns, Jupiter Ammon, and Alexander the Great.

Note added Dec. 2: I asked one of my staff to put something Christmassy on the small blackboard in front of our school. I didn't say anything more specific than that, but by chance she decided to make a drawing centered on a large white pair of antlers. 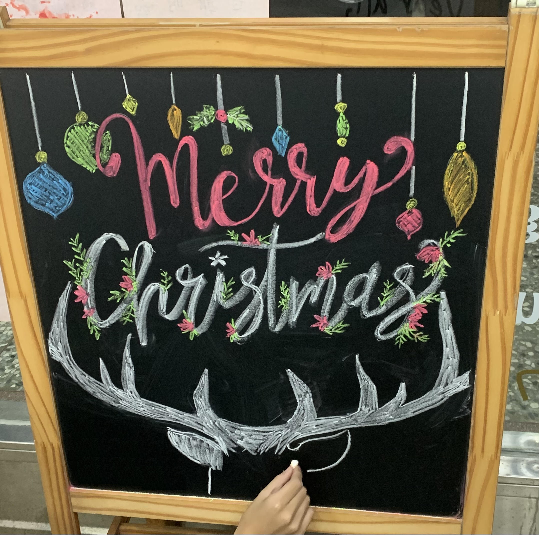 "Billy" Jean is NOT my sun/son?

Makes one wonder: is our dreams and intuition a form of divination and therefore demonic?
If so, how is Deborah's role as Prophet explained? or Jacob’s Dream at Bethel?
Is the Tarot (a form of divination) demonic?
What about Numerology/Gematria? or Symbolism, the Sacred Sciences?

Maybe this duality dimension Earth (with both Negative AND Positive Polarity) is Hell, which would explain, at least to me, why the Negative Polarity (Pan,Bears,Lucifer, Ammon, et.al) seem to always remain at the Helm, time and time again.
Maybe Earth is their ballpark?

IF this dimension is Hell aka the Bitter Sea,,it would explain (again, at least to me) why our high vibrational Soul abhors being incarcerated ( oops,I mean incarnated, interesting the similarity sound of those two words).... in a heavy dross CELL (physical blood body).

All PowerSources (Time and Matter) in this duel dimension can be and OFTEN are manipulated and controlled, depending on the INTENT whether it's used Negatively or Positively.

I wish to add this bit of clarification to my perspective about PowerSoures
on Earth and serving two masters.

What about advanced technology?
At one point do we or should we refuse
to participate in the Beast aka World Wide Web?
We (collectively) have 'invited' the beast into our homes, we clutch it in our
hands and life, have we not?

Given that the Military Industrial Complex birthed the internet, we must ask
ourselves is technology friend or foe?

Some people might say that we don't have a choice but to participate in the beast system, as our everyday lives are intwined in technology and I would respond: But, what about standing on principal and faith?
Is dipping our toe, just a little tiny bit, into the beast system ok?

Several years ago, the Meter Reader from the power and light company arrived at our home to change our existing meter to a 'smart' reader.
I, having researched for several years the smart meter and what I believe will be its connection to the IOT, was hesitant and told the meter man so.

He said :" Listen, either you do or you don't. Doesn't matter to me either way.
As a matter of fact it's less work for me if you don't.
But if you decide against it, you won't have any eclectic".

So, guess what master I chose??

I somehow missed this when you first posted it. I'm intrigued by the enormous white stag with the crows or ravens perched on its antlers. I spent an hour or so trying to figure out if this was a good or bad sign. I haven't been able to reach any conclusions yet.

The stags I feature on my blog - the ones with the crucifixes in their antlers - are symbols of personal conversion via St. Eustace and St. Hubertus. The white stag - sans the crucifix - has its own symbology, but it is often regarded as a spiritual messenger or the quest for spiritual knowledge.

The sudden ubiquity of deer imagery is to be expected at this time of year, but that white stag with the crows or ravens (corvids) on its antlers? Well, that's something different.