A while back, William Wildblood linked to a Guardian article about psychics' predictions for 2021. I didn't click on the link until today.

The article is illustrated by John Holcroft with a "wicked pack of cards" -- a fake Tarot with imagery drawn from the Satanic Revolution: 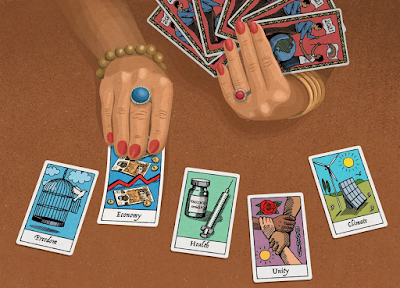 But the synchronicity fairies have played Holcroft for a fool, slipping in a few symbols of their own without his noticing. Take another look at the backs of the cards. 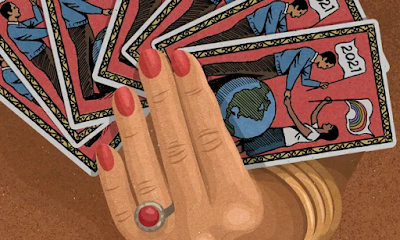 Ah, the familiar rainbow flag, symbol of diversity and perversity, right? But, no, it's actually a white flag with a rainbow on it, which is not the same thing at all. That's right, the sync fairies have actually tricked this sap into dedicating the year 2021 to Joan of Arc! And look at the whole design of the card. The world as a blue sphere in the center, and on either side a human figure bearing a white flag. Joan's banner had Christ in the center, holding the world as a blue sphere, and on either side an angel bearing a white lily. The word flag, of course, can also refer to a lilioid flower.

And take another look at this "Climate" card. 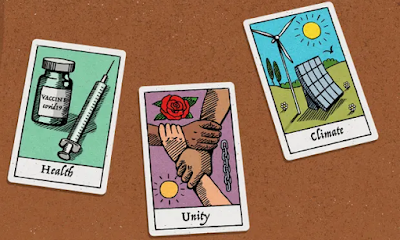 You see a wind turbine next to the Sun; I see a fleur-de-lys next to the radiant hand of God. You see a solar panel that just happens to be divided into a 4-by-4 grid. I see the Jerusalem Cross.

Where are those black and white images from? Would it surprise you to learn that they are details from the frontispiece of a book by Mark Twain? 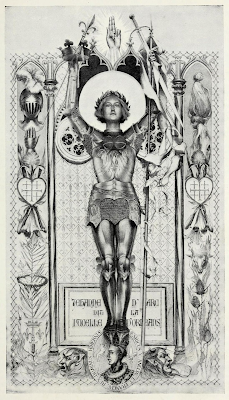 How far that little candle throws his beams! Maid of Heaven, pray for us!

Email ThisBlogThis!Share to TwitterShare to FacebookShare to Pinterest
Labels: Joan of Arc, John Holcroft, The highway is for gamblers

" the sync fairies have actually tricked this sap into dedicating the year 2021 to Joan of Arc!"

What does this actually mean? That drawing his illustration will tend to do the illustrator good, or the people who view it?

Or that it is a kind of private joke among the SFs, or that the twist negates, renders ineffectual, the intended symbolism?

Just a joke, I think, but perhaps with some power to do good. The forces of evil certainly believe in the efficacy of symbolism even when it is hidden or “subliminal,” and they may well be right about that.

This is the sort of thing I have in mind when I talk about “Jungian slips.”

Somewhat related: Cards also link Joan to the current year by way of her father’s name.

Consideration of actual meanings aside, the appearance of that rainbow flag in a mainstream article promoting positive 2021 prediction mere days after you explored the rainbow symbol in detail on this blog is remarkable and certainly meaningful.

My Captain Obvious level of symbol interpretation managed to notice that the fortune teller's right hand is adorned with a large blue ring, while her left hand displays a smaller, red ring.

I guess obviousness is relative, Frank! What meaning do you see in the rings?

The right hand has a blue ring on the middle (Saturn) finger and holds the Economy card? (How many pounds is that on the card?)

The left hand has a red ring on the ring (Sun) finger and holds seven hidden cards marked with the sign of Joan of Arc.

Twelve cards total for the months of the year? Is the first card the rightmost or the leftmost? I assume the former: Freedom is the last visible card, because once Freedom appears, there’s no telling what’s coming next.

Five visible cards takes us up to the end of May — that is, up to the feast day of St. Joan.

That's good, but my observation is far more elementary. I get the sense the artist may have been channeling the choice between the blue and red pill (á la the Matrix). The hand with the blue ring makes everything visible, while the cards in the red-ringed hand remain concealed - that is, you can only see the back of the cards, which all feature the rainbow flag. Choose the blue ring - everything stays the same; red ring - the revelation of a life-changing truth.

That's it. As you can see, I really suck at this.

What I like about this kind of stuff - although, as you know, it goes against my grain! - is that it is an excellent antidote to the deadly assumption that nothing *really* means anything.

The opposite view is - at least - so much more Fun.