Dall-E 2 has a feature where you can upload a picture, and it will generate four "variations" on it. This naturally raises the question: What happens if you generate variations on the Woman Yelling at a Cat meme, pick the strangest one, generate variations on that, pick the strangest one, and so on for many generations. This is taking "memes" back to their origins, as something that was supposed to evolve by a Darwinian-like process of variation and selection. 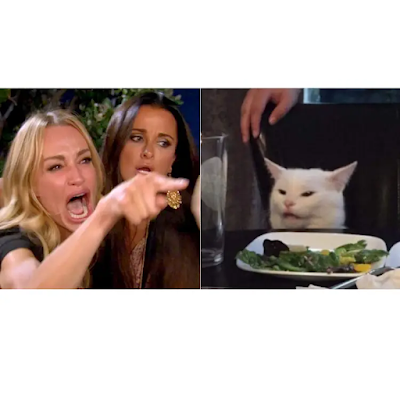 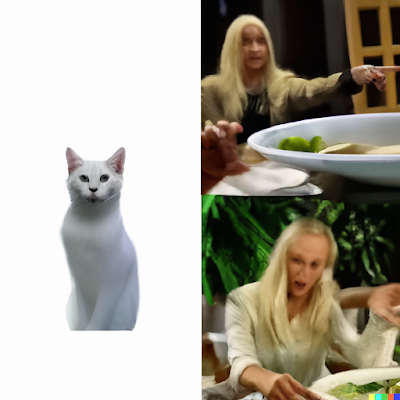 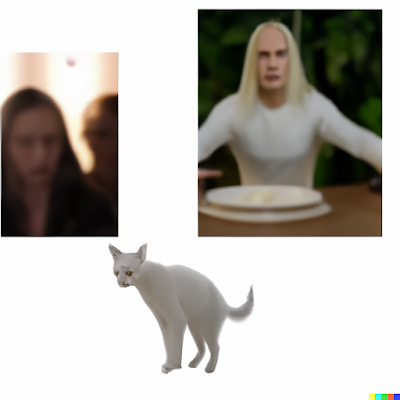 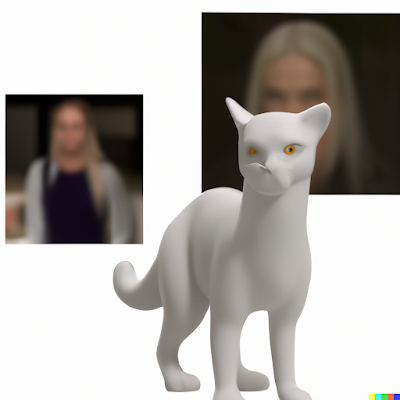 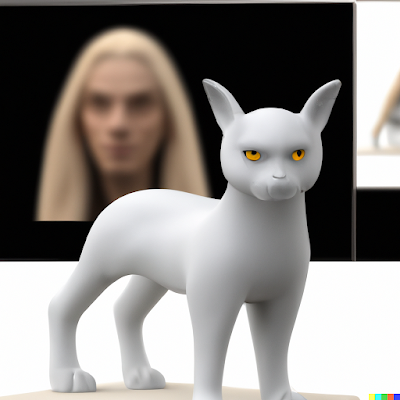 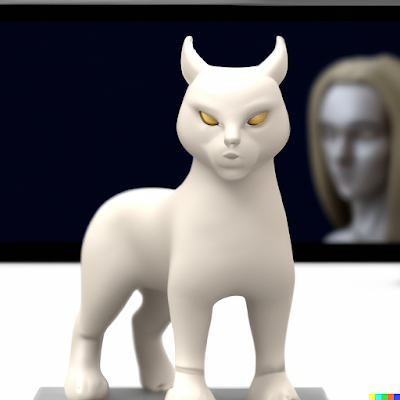 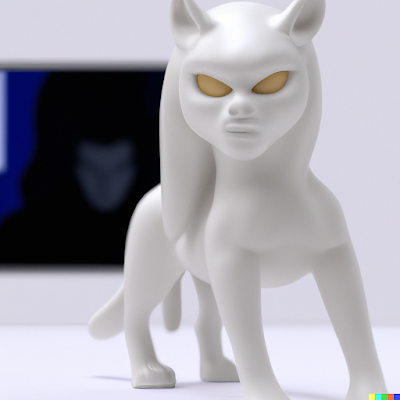 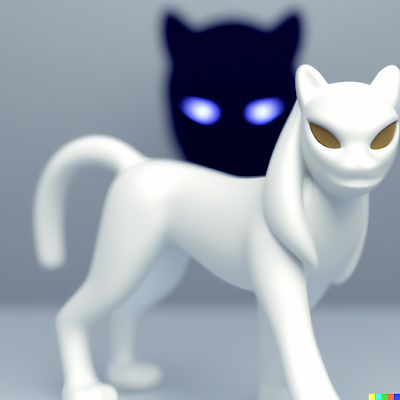 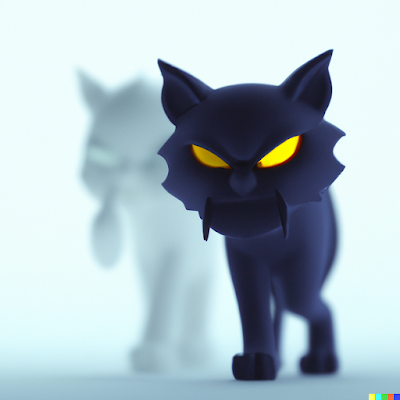 "Pick the strangest one" is a pretty vague sort of selection pressure, so this next series is one where I followed an actual rule: Of the four variations generated, always pick the one in which the cup is the most prominent. 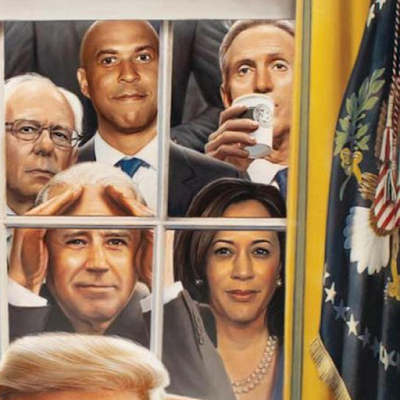 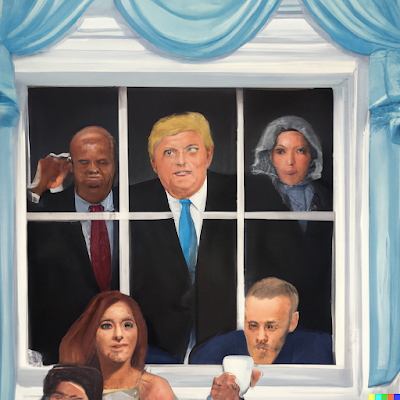 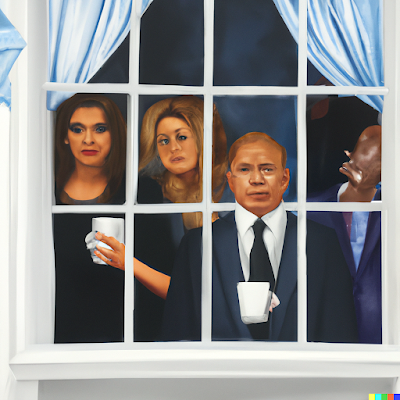 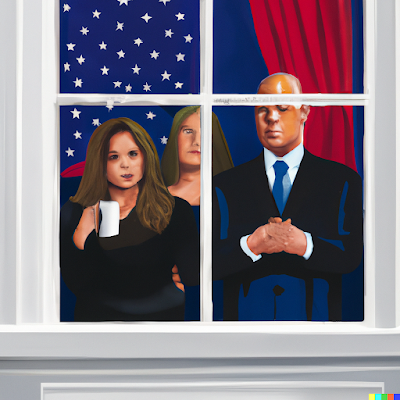 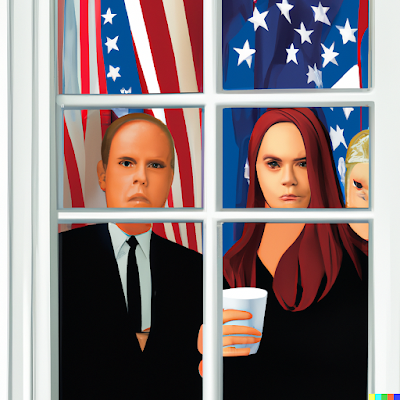 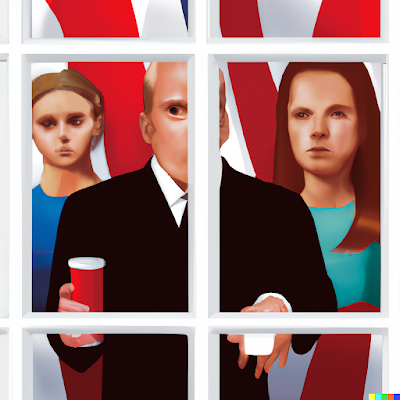 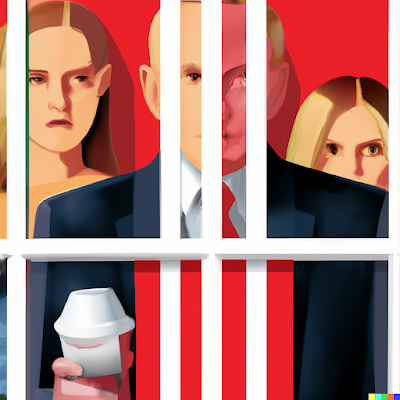 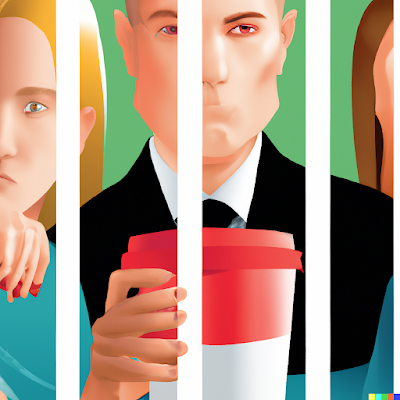 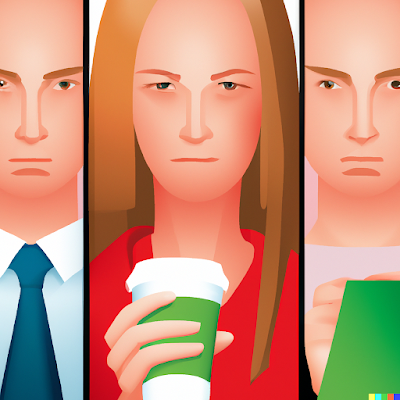 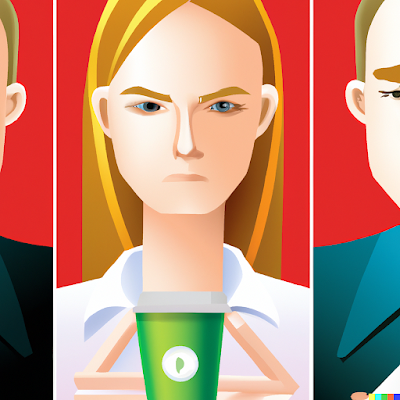 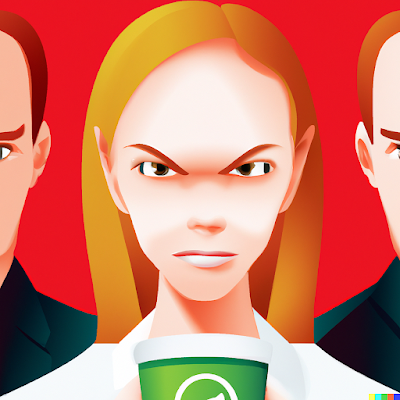 And we're almost back where we started, aren't we? 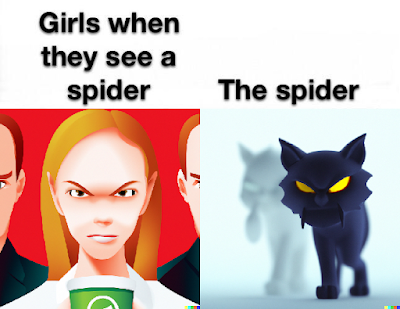 Email ThisBlogThis!Share to TwitterShare to FacebookShare to Pinterest
Labels: A little nonsense now and then, Dall-E 2

Very interesting, especially the 8th photo ( starting from the Time Cover photo )
The 8th photo being the man holding the red and white cup and it appears there are two females by his side.
At first glance that man appears to be ( at least to me ) Prince William.

On the left side of this photo of 'William' the female with the blonde hair, maybe Charlotte, William's daughter ?

Interesting the recent trend of woman being 'elected' Heads of State.
My chalice/ cup/female theory including my Harris prediction of her possibly chosen upcoming role in The Great Reset, may ring true after all.

As far as the blonde in the photo with 'William' and especially the series of photos
that follow showing a transformation of females holding cups
perhaps symbolic of Charlotte taking the helm?

Interestingly the last picture of 'Charlotte' holding the cup and two men beside her
(maybe Charles and William ?)

And last but not least the last picture where you wrote: Girls when they see a Spider. :

You do know that a spider was spotted on Queen Elizabeths' casket, right?

Interesting connections, Debbie, but it's hard to imagine Charlotte on the throne anytime soon. She's only seven, and William (40) and George (9) are likely to be around for a long time.

I don't know.
I found this information interesting about British History and young Monarchs.

Whatever happens, I think it's not a far stretch of the imagination to assume that there is going to be a Great Upheaval in the Global Political Arena, which is already happening, and that includes the US.

As we know, Figure Heads are just a Front Man/Woman and that fact is obvious especially in America.

3rd from bottom cat one they morphed the cat into Kube from Puella Madoka Magica.

I linked on that particular post a 5 hour documentary in which the youtube creator, presented some very intriguing theories about the shape of the horeshoe and why it was incorporated into the architecture of the many beautifully and regal buildings of the past.

Well, low and behold I came across a very interesting find ( which I believe to be symbolic to somewhat validate my theory about the horeshoe's esoteric connection and interestingly
enough, Charlotte herself, which I shared my theory above.

I found this information which I copied and pasted a snippet below.
Do note that not only was the brooch placed on the LEFT SIDE of Charlotte's black coat, but the horseshoe was placed in upright position, perhaps symbolic of the Cresent Moon?

Also, check out the Black Saturn hats as well.

And last but not least, check out an interesting article on a Blog ( link below ) about Horseshoes and the Cresent Moon.

Here's the copy and paste:
"Charlotte wore a diamond horseshoe brooch pinned to the left side of her black coat to honor her late great-grandmother's love of horses. The sentimental brooch was gifted to the young princess by Queen Elizabeth herself."

Here is a copy and paste snippet from the sacred texts article about the horseshoe
and the crescent moon.

"The growing horned moon was thought to exert a mysterious beneficent influence not only over many of the operations of agriculture, but over the affairs of every-day life as well. Hence doubtless arose the belief in the value of crescent-shaped and cornute objects as amulets and charms; of these the horse-shoe is the one most commonly available, and therefore the one most generally used"

I also just found this very interesting article about the connection to the horseshoe
and the moon.

Here is a copy and paste snippet from the article;
"Shaler believes that the iron horse-shoe was invented in the fourth century, and from the fact that it was first called selene, the moon, from its somewhat crescent-like shape, he concludes that it originated in Greece."

I think my interest in the horseshoe having esoteric connections is because
I grew up in my grandparents small house where my grandfather had nailed a red and white horseshoe in the doorway of the living room and kitchen.

My family roots are in Louisville Kentucky which I know you're familiar with not only
the Kentucky Derby but the Bluegrass State, especially Lexington, being known as the Horse Capital of the World.

Here's a copy and paste snippet from the first article.

"The Spider as an animal is a spiritual teacher in its own right.
For example the Spider’s web is a constant reminder of the eight festivals.

This is easily seen in the wheel webs some Spiders weave. The strands of the web, like the spokes of a wheel are straight from the edge to the middle and do form the eight-fold wheel.

That same web also shows the pentagram and the levels of spirituality known in Druidry as: Annwn, Abred, Gwynvyd and Keugant."
~~~~~~~~~~~~~~~~

What I found interesting is once again, there is reference to the Eight-Fold Wheel, and of course the number eight (the spider having 8 legs)
If you recall I also commented that Queen Elizabeth's casket sat upon a red Octagon platform.

It appears that once again, we're right back to my theory about the Octagon and especially the Eight Point Star of Ishtar, the Union Jack, the Ferris(Fortuna ) Wheel, and the Steering Wheel of a Ship.

In the article posted from the NYpost (second link below)
there is even mention of the E.B. White Book Charlotte's Web.

And last but not least, I found this interesting article (third link) about the
characters in the book Charlotte's Web especially regarding Charlotte (the spider).

I think the description of the spider Charlotte (in this article) is very similar
to the young Princess Charlotte.

Here's a copy and paste snippet from the article
"First, Charlotte does not fit any of the conventionally held concepts of the hero. She is small, apparently powerless, and weak.

Yet she is Wilbur's friend, and her unselfish actions demonstrate that nobility has little to do with looks or power".
~~~~~~~~~~~~

I think the point that I'm trying to make is this:
I don't think that this very intriguing (hidden?) symbolism of the upright horseshoe or the spider is 'just a coincidence'.

Why does it always go down the path of creepy angry looking things?