In the comments, my post about the world's most racist toothpaste has turned into a discussion of the martyrdom of St. George of Minneapolis. Debbie pointed out the bogus nature of the "crime" for which he was under arrest: buying some cigarettes and then refusing to return them when the shopkeeper belatedly decided he had paid with a counterfeit $20 bill.
Responding to a comment by ben, and to the general suggestion that the whole incident may have been scripted for some dark purpose, I wrote:

For maximum evulz, they had to get someone sympathetic enough to become a "hero" but obviously-bad enough that those lionizing him would be knowingly celebrating evil. GF, who had done some seriously bad things (such as threatening to kill a baby during a home invasion) but in this particular case was under arrest for some bogus petty non-crime, fit the bill.

This was a reference to the TV Tropes term "For the Evulz," -- referring to villains who have no motive beyond being evil for evil's sake -- and for some reason immediately after posting it, I randomly decided to run a Google image search on evulz. The second result was a "motivational poster" style meme featuring Heath Ledger as the Joker from The Dark Knight. (The archetypal knight, solidified in that role by Edmund Spenser, is St. George.) I clicked on it, and one of the "related images" caught my eye. 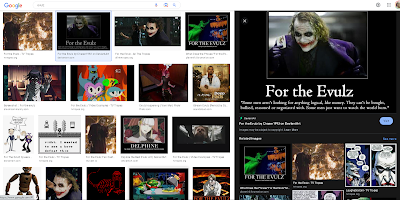 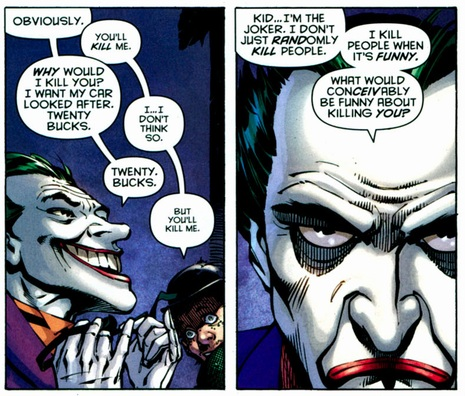 "Twenty bucks." "But you'll kill me." It's from a 2008 Batman comic book, so well pre-Floyd. My finding it immediately after posting about GF and the $20 bill was the result of a completely random whim.
at September 08, 2022

Email ThisBlogThis!Share to TwitterShare to FacebookShare to Pinterest
Labels: Batman, George Floyd, Joker, The highway is for gamblers

Just a little trivia about Rod Serling's connection to Ohio:
Rod Serling was in the Air Force stationed at Wright Patt.
He attended and taught for a while at Antioch College.
His wife was from Ohio.

My sister and I LOVED Twilight Zone which aired on Friday night on WCPO Cincinnati!!
Although the reception on our tiny black and white TV barely came in from Cincy,we would occasionally get a chance to see a glimpse of the picture every now and then
in between the 'snow'.
Foil on rabbit ears worked on clear nights. High Tech ;-))

Here's a YouTube snippet of the Twilight Zone episode;22

Here's 'another youtube snippet of a Twilight Zone episode where the setting is in Ohio:
It's titled: It's a Good Life
https://www.youtube.com/watch?v=QxTMbIxEj-E

and yet another with references to Ohio titled; Nick of Time
https://www.youtube.com/watch?v=Vqc8b9nKgoo