These are all terrible business ideas 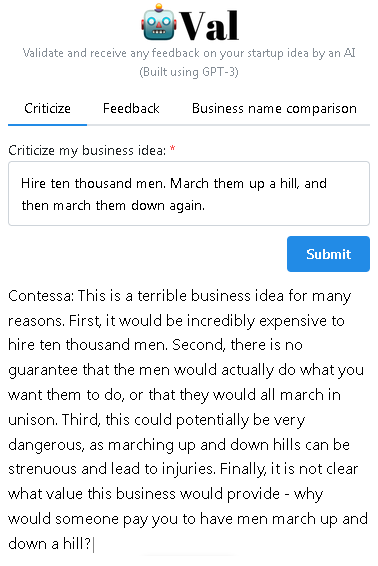 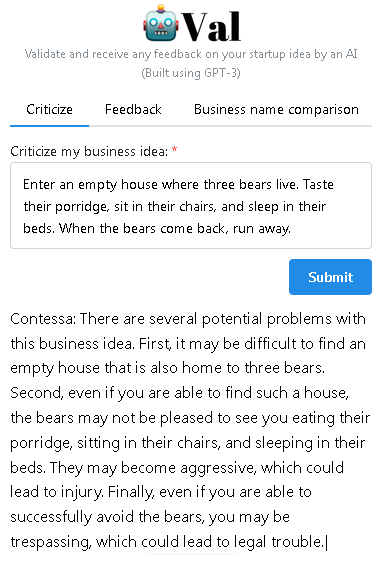 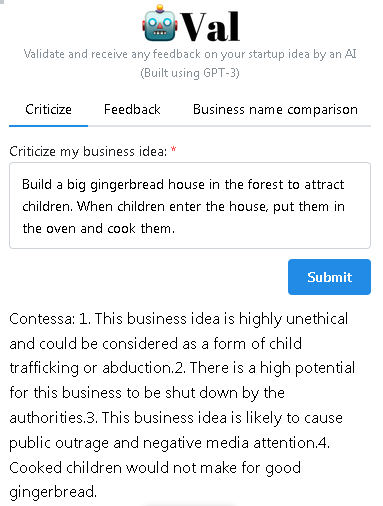 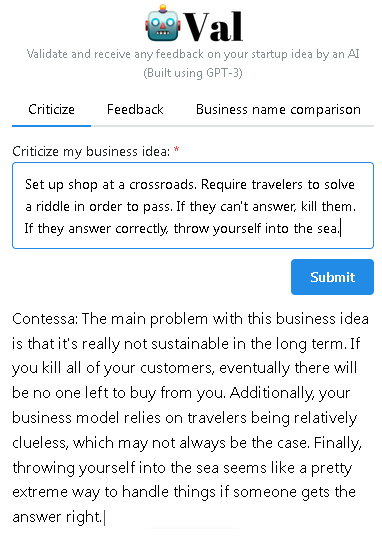 Email ThisBlogThis!Share to TwitterShare to FacebookShare to Pinterest
Labels: A little nonsense now and then, ValidatorAI

"Cooked children would not make for good gingerbread"

Apparently it was only the first one where the value proposition was unclear.

Shoot at a raccoon in my yard, and penetrate undiscovered oil reserves pooled underground with the buckshot and cause a gusher. Then allow minions of the petroleum industry onto my land to purchase the mineral rights for many millions of dollars. Take the proceeds and move to Beverly Hills, CA.

Contessa: 1. It is illegal to shoot at raccoons in some states.2. You could miss the raccoon and hit a neighbor, which would create legal trouble.3. Even if you hit the raccoon, there is no guarantee that you will also hit an underground oil reserve.4. If you do hit an underground oil reserve, you could cause an environmental disaster.5. The petroleum industry is not likely to give you millions of dollars for your idea

Within an infinite void, kindle a big bang that spontaneously brings tremendous quantities of energy and matter into being. Configure conditions and operating parameters such that matter condenses into stars, galaxies, planets and so forth. On a particular planet populate the surface with a great variety of organisms. Eventually, configure one particular species to develop putative intelligence. Have this clever species tinker with physics until they learn to create artificial intelligence based on algorithms and regressive analysis hosted in electronic circuitry. Allow interaction with the AI via the internet so that questions may be asked and answers received.

Contessa: The main problem with this idea is that it requires an already existing intelligent species to create the AI in the first place. Additionally, the AI would be limited by the understanding of physics that the clever species has at the time of its creation.|

Sell a cow in exchange for some magic beans. Use the beans to grow a giant beanstalk. Climb the beanstalk and find a giant's castle. Enter the castle, steal the goose that lays the golden eggs, and run away from the giant. Climb down the beanstalk faster than the giant, and then chop it down so that the giant falls to his death. Then make lots of money selling the golden eggs.

Contessa: Some potential problems with this business idea include:-You may have trouble finding someone who is willing to trade a cow for magic beans.-Even if you are able to find someone to trade with, there is no guarantee that the beans will actually grow a giant beanstalk.-If you do manage to grow a beanstalk and reach the giant's castle, you could be put in danger if the giant catches you stealing his goose.-Climbing down a beanstalk quickly enough to escape from a giant may be difficult or even impossible.-Chopping down the beanstalk while the giant is still on it could also be dangerous.All of these potential problems could lead to financial loss or even bodily harm, so potential investors should be aware of them before deciding whether or not to invest in this business idea.|

Contessa: There are several potential problems with this business idea. Firstly, it is not clear what the second phase of the plan is. It is also not clear how the business will generate profit from simply collecting underpants. Finally, there could be legal implications to starting a business that involves collecting underpants from people without their consent.|

Wm, that last one sounds a lot like the Beany Babies paradigm. Good thing your blog has a small readership, or that idea might get out into the wild and start a new fad/craze.

Feedback on my business idea:

"Be a muffin man. Bake muffins. Sell them out of your residence on Drury Lane."

Contessa: Your idea has potential, but there are a few things you should consider before starting your business.First, Drury Lane is a busy street and muffins are delicate items that could get squished or damaged if they're not protected properly. You'll need to find a way to package them securely so they survive the journey from your kitchen to your customers' homes.Second, selling baked goods out of your home is technically illegal in most jurisdictions unless you have a special permit or license. You'll need to check with your local government to see what's required in order to sell food products legally.Finally, while Drury Lane is a busy street, it might not be the best location for selling muffins since there are already many other businesses competing for foot traffic. You might have more success if you set up shop near a local park or school, where there are fewer food options and more potential customers.

"Locate tree of knowledge of good and evil. Disregard suspicious serpent. Eat fruit from tree. Become like unto gods."

Contessa: Some potential problems with this business idea include:-The "tree of knowledge of good and evil" may not actually exist, making it difficult to locate.-Even if the tree does exist, it is possible that the fruit from it will not make people become like unto gods as promised. This could lead to disappointed customers.-This business idea also seems to involve breaking one of the most well-known commandments ("Thou shalt not eat of the fruit of the tree of knowledge of good and evil") which could cause some religious groups to boycott the business.

"Acquire a large quantity of cheap hay. Hire a sketchy magic dwarf to spin the hay into gold, by promising to give him your firstborn child. Do not give him anything. If the dwarf kidnaps your child, call the police and have them throw the dwarf in jail because human trafficking is illegal."

"Use a genie lamp to wish for infinite riches and power."

Contessa: The lamp may not work as intended, or the riches and power may come with undesirable strings attached.|

"Hire 20 students under 22 years of age through a highly competitive application process. Require them to drop out of university. Offer them $100,000 over two years to work on an innovative research idea of their choice. Introduce them to various Silicon Valley startup executives."

Contessa: Some concerns with this idea include: 1. Will there be enough interest from students to make the application process highly competitive? 2. How will dropping out of university impact the students' long-term prospects? 3. Can the students realistically be expected to achieve success with their research projects given the short time frame and lack of experience? 4. What if the startup executives that the students are introduced to are not interested in their research ideas?

"Travel around the 19th century Russian countryside convincing landowners to sell you the title deeds to indentured serfs that have already died, but are not yet counted as dead on the census. Mortgage the deeds in exchange for a vast amount of money. Annul the resulting debt at the next census."

Contessa: 1. You could be accused of fraud if you can't prove that the serfs are actually dead. 2. The landowners may not be willing to sell the title deeds, or may not have the legal right to do so. 3. If the serfs are counted as dead on the next census, the debt will still need to be repaid.|