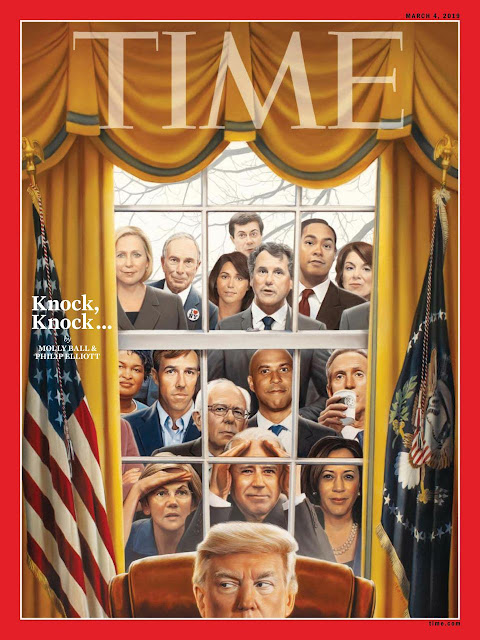 Now who are all these people looking in the window? 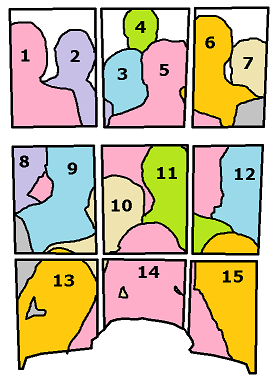 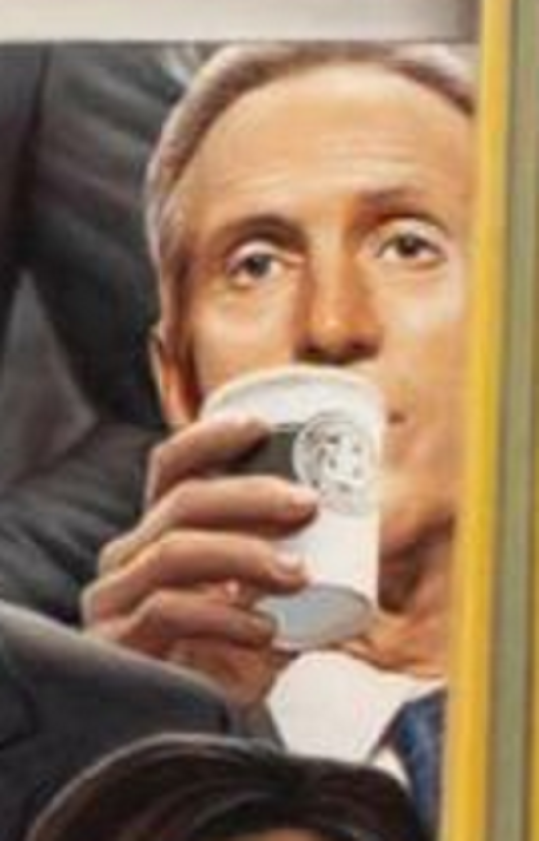 Seriously, who is this guy? I've pored over Wikipedia's list of 2020 Democratic primary candidates, which is what the cover is supposed to represent, but he just doesn't look like any of them. Debbie thinks he might be George W. Bush, which would be very weird, but he doesn't look like him, either.
Any ideas?
at September 03, 2022

starbucks cup made me think starbucks.

ben, I thought the same thing and I agree that it looks to be Schultz.

Yes, mystery solved. According to Wikipedia, Schultz said in January 2019 that he was considering a run for president and didn't rule it out until September -- so in March 2019 he would be considered one of the possible nominees. He was Starbucks CEO from 2008 to 2017 and has been interim CEO since March of this year.

I think you might be right Ben.
I too think the person in this illustration looks like Schultz.

I think the Starbucks cup is the clincher, and although
I was leaning toward Dubya and the Jackson Mississippi water crisis
connection, however if this is an illustration of Schultz, perhaps
the hidden 'message' is the Starbucks cup being symbolic of the Female Yoni.
Which I did mention the female cup/chalice in my previous comment.

As you may know Starbuck's original logo ( which they got a lot of flak about
over the years and eventually modified) was the Siren, which is obvious
Yoni symbolism.

I'm going to go out of a limb here and I've shared my perspective about this before
on William's blog, as I've been predicting this for the last few years.

Let me start by saying that I think Biden's STOP Maga speech on Sept 1 with the background of the Red Bricks at Independence Hall was all symbolic and perhaps an Alchemical Ritual.

As I'm sure you know the Alchemical Transformation also known as the Great Work,
Magnum Opus
is the process of the Nigredo to the Rubedo (Lead to Gold)
which the Rubedo is the Reddening and ending of the Alchemical Process.

I believe that we are at the end of the Alchemical experiment we once knew as America, and I believe we are on the precipice of the ushering in of a Technocracy, which will be known
as The New Atlantis.

John Dee, Sir Walter Raliegh, Sir Francis Bacon and in the 19th Century Manly P. Hall
have all carried Plato's Torch of the rise of the New Atlantis, which Dee believed
was on the 77th Merdian West, which is why Washington D C, and Philidelphia is on
the 77th Merdian West.

I believe Biden gave the Red Brick Stop Maga speech at Independence Hall as a ritual
marking the ending of the American Empire.
The Rusting of the Industrial ( Iron ) Age
ushering in The Silicon ( Information ) Age.

America was an Alchemical Experiment and was destined to play an integral role at the Shifting of Ages which we are on the precipice of.

It's interesting that in the Time Cover, who is the person closet to the door?
Let's say that the window in this Time illustration is a door.

If Trump was to rise from his seat at the table. let's say,
and turn around to open the ''door'', who would be
the first person to step into the office, according to this illustration?

It wouldn't be Biden as Biden would be behind Harris.
Kamala's name in Hindi meaning Lotus Flower, Pale Red

I personally believe that Harris whose linage is Indian was selected as the Rubedo
(Reddening ) for this time in America's history.
Harris is not a Black Woman and I'm bettin' she doesn't think of herself as one.

Red is the color of the Sunset AND the rising Sun.

For all endings there is a new beginning.

I think the Red Brick Stop Maga speech was a spark for an upcoming Black Swan Event that will catapult Harris into the POTUS position.
I think during the chaos, a' 'temporary'' Triumvirate Governance will be enacted.

I believe that Harris, and a Republican (perhaps Trump or Pence or perhaps DeSantis) will serve as 2 of the 3 triumvirs the 3rd being a Tech guy ( Bezo's or Gates perhaps (I don't think it will be Musk)

I found it interesting that only Trump's head is pictured in this illustration.

Cut off the Head, the Body dies.

In Biden's Stop Maga speech he speaks of Trump dividing America.
I don't think it's a coincidence that the 2016 Republican National Convention was held in Cleveland Ohio.
Cleveland is also a part of the Rust Belt of the Midwest.

Marshall thinks that person number 5 in the illustration is Ohio Senator Sherrod Brown.

In keeping with my previous email connecting Harris and Howard Shultz holding
the Starbucks cup, I found this etymology meaning of the word Siren, very interesting indeed.

Here's the copy and paste
mid-14c., "sea nymph who by her singing lures sailors to their destruction," from Old French sereine (12c., Modern French sirène) and directly from Latin Siren (Late Latin Sirena), from Greek Seiren ["Odyssey," xii.39 ff.], one of the Seirenes, mythical sisters who enticed sailors to their deaths with their songs, also in Greek "a deceitful woman," perhaps literally "binder, entangler," from seira "cord, rope."

Meaning "device that makes a warning sound" (on an ambulance, etc.) first recorded 1879, in reference to steamboats, perhaps from similar use of the French word. Figurative sense of "one who sings sweetly and charms" is recorded from 1580s. The classical descriptions of them were mangled in medieval translations and glosses, resulting in odd notions of what they looked like.

I think both Harris and Biden are just playing their role on this: All the World is a Stage, as did Trump, as did Obama and on and on ad nauseum.

IMO,they're all the same guy.

Although and that's not to say, and I personally do believe, that humanity has been blessed throughout history with those Souls who have endeavored, and many times have lost much to help humanity evolve.
Jesus being the first.


Also interestingly these meanings;
1. "sea nymph who by her singing lures sailors to their destruction


I believe that we as humanity are the sailors, and I believe humanity is on the cusp
of a Spiritual War for our Soul via Transhumanism via Artificial Intelligence
and for America I believe we are on the cusp of a Civil War, fought Economically.


Of course the female energy is water and I don't think it's a coincidence that the
Time Cover illustration included Howard Shultz (Starbucks) holding a cup.

What better ritual ( especially symbolic of the End of the American Empire)
than to usher in the New Atlantis and the Age of Aquarius
(the Water Bearer) using a symbolic "Pale Red" Siren.

there's a Starbuck in Moby Dick. and the green (I think) of the Starbucks logo brings to mind the green door.

if there's a message in there, it's pretty subtle

I also want to add that in the illustration Howard Shultz is directly above Harris.
The 'cup' also looks as though it's sitting on the top of her head.

Remember a siren is a device that is used to provide an emergency warning to the general population of approaching danger.

Biden is between two “Indians,” since Elizabeth Warren is notable for pretending to be a Native American.

The cup on her head makes me think of Serapis.

You wrote:
"Biden is between two “Indians,” since Elizabeth Warren is notable for pretending to be a Native American."
~~~~~~~~
My response; EXACTLY!!!
The message being the Reddening.

Think about it, if the window was a door, either way whether the door opening was on the left or on the right a ""reddening""" would have been the first to walk through the door.


Also I just googled Serapis!!!
It appears that I've got a lot of research to do.

Thank you for sharing this,as I've never heard of Serapis.

What would you say the connection to be?

Some historians maintain that Serapis was an artificially created god, invented by Ptolemy I for political purposes. (I think I got that from Walter Ellis's biography of Ptolemy.) In the 2009 Spanish historical-drama movie Agora, a Christian preacher in Alexandria is shown ridiculing Serapis by saying, "How could anyone worship a god who wears a flowerpot on his head?"

No idea what connection he might have to all of this; he just came to mind because of his distinctive headgear.

When Serapis and Isis are depicted together, they are often depicted as snakes with human heads -- somewhat reminiscent of the melusine/siren in the Starbucks logo.