What's this lame-ass racist meme doing in my sync stream?

The Most Censored Publication in History posted this the other day. As I may have mentioned once or twice before, the sync fairies ain't got no class. I appreciate a good racist joke as much as the next guy, but do note the qualifier good. Lame is lame, and this is like post-birdemic Stephen Colbert tier lame. Anyway, it's got the Wizard at the Green Door and, so the sync fairies must be in on it somehow, and it would be remiss of me not to post it. 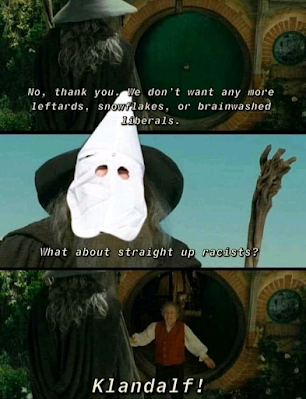 I'm sorry, but this is just bottom-of-the-barrel memesmanship. The whole joke is that the first syllable of Gandalf's name rhymes with the last syllable of the KKK? That's it? They might as well have the wizard show up with a box of breakfast cereal and Bilbo say "Raisin Brandalf!" In fact, that would probably be funnier, since hobbits like to eat breakfast and all. Anyway, it wouldn't be any worse than this. This is about the level of that guy in the Balzac novel who thinks he's being witty by sticking -orama on the end of everything (Hey, guys, Klanorama!) -- except that guy actually is funny, because he's written by Balzac, and because the endless repetition of the same non-joke becomes funny in spite of itself. The elephant-joke method -- or, if we want to be gratuitously offensive like the present meme, the dead-baby method. One dead-baby joke in isolation can't be funny, and neither can one random-words-that-sound-a-little-bit-like-Klan joke.
Really, what is this garbage doing in my sync stream? If anyone wants to try to winkle some meaning out of it in the comments, have at it, but don't expect too much.
I demand that the synchronicity fairies apologize, and I will be contacting their employers.
⁂
Update: I should have known it's too stupid not to have been done already. 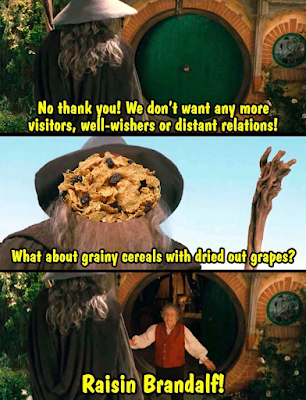 I can see how a whole series of these could reach elephant-joke status.
at September 06, 2022

Email ThisBlogThis!Share to TwitterShare to FacebookShare to Pinterest
Labels: Green Door, The highway is for gamblers, Wace! Wun! Wobbers be done!

"They might as well have the wizard show up with a box of breakfast cereal and Bilbo say "Raisin Brandalf!" In fact, that would probably be funnier, since hobbits like to eat breakfast and all."

You're right. That is much funnier!

🤣 I think it's pretty good

Well, that's the edgiest instance of the meme that I've come across. The format is just about making dumb puns. I like my memes with a bit more meaning, but the internets take all kinds!

No accounting for taste, I guess. "What about Grand Wizards?" would at least have been trying.

I didn’t realize this was an established format. That makes it less unfunny, since it’s not an isolated joke.