The Wizard at the green door 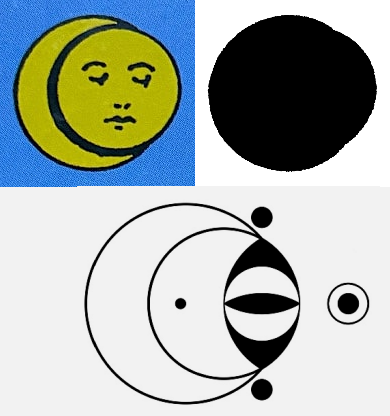 Yesterday (August 5), the homework for one of the English classes I teach happened to include this exercise: 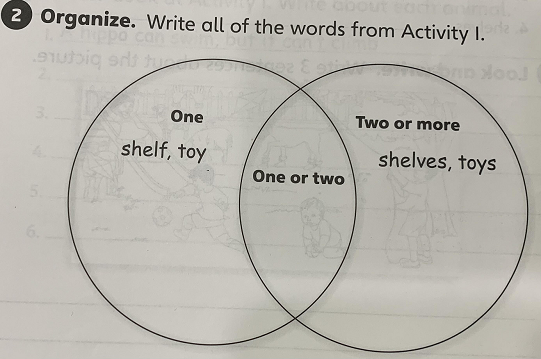 Venn diagrams are fairly commonplace, but this one is uniquely relevant. As you can see, the two circles are for singular and plural nouns, with nouns that do not change form going in the middle section. One of the words that needs to be written there is fish -- as in vesica piscis. Also notice that what is printed on the other side of the page is faintly visible, and that right in the vesica is a picture of a baby, tying in with the vesica as a yonic image and a symbol of birth.
The vesica piscis is obviously closely related to the ichthys, or "Jesus fish," and Jesus (the baby in the picture above?) can also be thought of in terms of the Venn diagram -- the intersection of human nature and divine nature. Does that mean that Jesus had "two natures," as classical theology has it, or does it mean that there is only one nature? "One or two?" asks the Venn diagram with the baby.
Whitley Strieber used a Venn diagram on the cover of his book Jesus: A New Vision. As in the Locust Grove formation, there is a smaller circle inscribed in the vesica piscis. 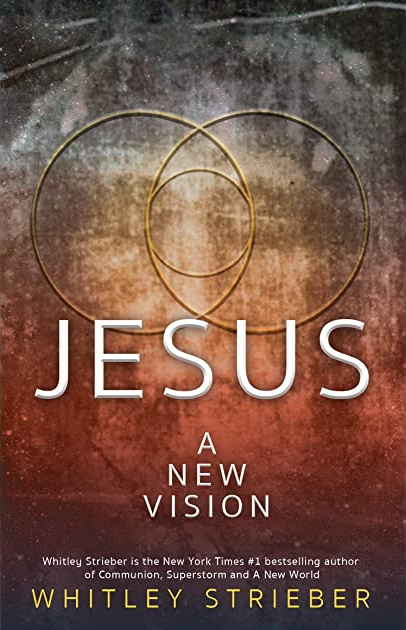 I have discussed this vesica piscis sync first to get it out of the way, but it was actually the second one of August 5. Earlier that day, one of my young students (from a different class) drew this on the whiteboard during a break between classes: a vesica piscis inscribed in a circle, with the remainder of the circle colored green. I didn't get a chance to snap a photo, but this is a schematic reconstruction. It looked very close to being a mathematically precise vesica piscis, one by the square root of three. 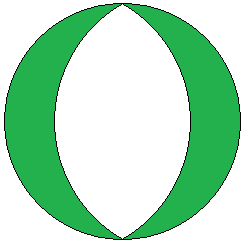 The Locust Grove formation features a circle inscribed in a vesica piscis, with a narrower lens (too narrow to be a true mathematical vesica) inscribed in the circle.
"What's that?" asked one of the other students.
"It's a watermelon!"
"Why is it empty in the middle?"
Why indeed? It's a very strange way of drawing a watermelon, and it made me think of "Cucurbits from an alien land" and the melon or gourd as a gateway to the dream realm. As Debbie has pointed out, the "yoni" shape of the vesica piscis is closely associated with the symbolism of the door -- and in this case it's a green door -- a circular green door, like the one Gandalf knocks on. 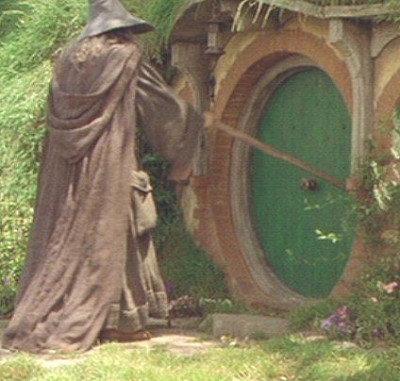 The "watermelon" drawing also resembles a green letter O, as seen on the original cover of The Wonderful Wizard of Oz. 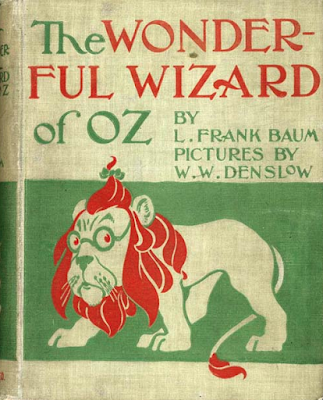 And how could I have forgotten that The Wizard of Oz (the 1939 film version) also has a scene in which someone knocks on a green door? 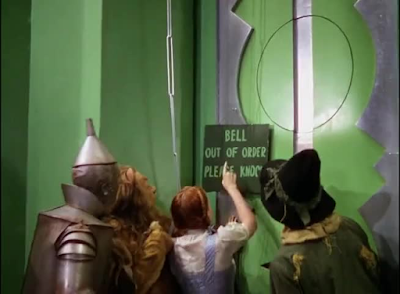 And this green door includes a smaller, circular green door. 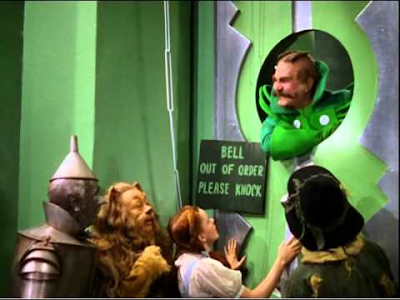 In the book, the Guardian of the Gates, who lets Dorothy and company into the Emerald City is described as being "about the same size as the Munchkins" -- that is, very short, like a hobbit. In the movie, Dorothy and her friends first ring the doorbell, but the doorman insists that they knock instead, drawing their attention to a notice that says, "Bell out of order. Please knock."
In The Hobbit, Bilbo is first disturbed by one group of dwarves after another showing up and ringing his doorbell, and then:

[T]here came a loud knock. Not a ring, but a hard rat-tat on the hobbit's beautiful green door. Somebody was banging with a stick!
Bilbo . . . pulled open the door with a jerk, and they all fell in, one on top of the other. More dwarves, four more! And there was Gandalf behind, leaning on his staff and laughing. He had made quite a dent on the beautiful door . . . .

It is Gandalf, a Wizard, who knocks on the green door. When Dorothy knocks on the green door and is asked to state her business, she says, "We want to see the Wizard."
The Wizard is a representative of the supernatural or divine world, so this ties in with the Script line, "You can talk to God, go bangin' on his door." (Banging is the very word used by Tolkien.) Sometimes you knock on God's door, and sometimes he knocks on yours. Jesus said both, "Knock, and it shall be opened unto you" (Matt. 7:7, Luke 11:9) and "Behold, I stand at the door, and knock: if any man hear my voice, and open the door, I will come in to him" (Rev. 3:20).
When Mormon artist Greg Olsen decided to illustrate that last verse, guess what color he chose to make the door?
⁂
Note added: In this post, I talk about Gandalf knocking on a door just after I refer to "the melon or gourd as a gateway to the dream realm." How could I have forgotten that in The Lord of the Rings, Gandalf opens another door by uttering the word mellon? 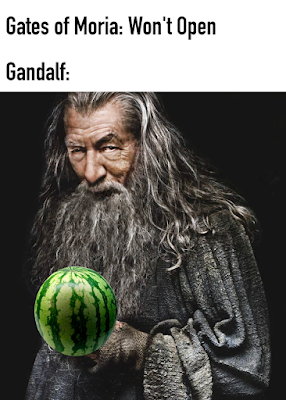 Mr Owl's left side, her right side.

@Wm, it would surprise me if you did

William,
Excellent connection of the dots!!

The Bell is Baal. "Ring-ing" the doorbell is summoning Saturn/Time/Baal so that we can
proceed through the doorway.
To enter into the other side to 'hell' perhaps?
Recall my perspective about Earth being ' Hell-low'.

I found the etymology of the word Knock, interesting ;

knock (v.)
Old English cnocian (West Saxon cnucian), "to pound, beat; knock (on a door)," likely of imitative origin. Figurative meaning "deprecate, put down" is from 1892. Related: Knocked; knocking. Of engines from 1869. To knock back (a drink) "swallow quickly or at a gulp" is from 1931. Many phrases are in reference to the auctioneer's hammer, for example knock down (v.) "dispose of (something) at auction" (1760).
~~~~~~~~~~~~~~~~~~~~
According to this information and considering the figuartive meaning of knock meaning: "deprecate, put down : and the reference to the auctioneer's hammer to "dispose of something at auction" somewhat validates my perspective about our Soul (falling down and away from the Divine) to incarcerate/incarnate to hell under the Sun.
~~~~~~~~~~~~~~~~

Another 'knocker' is a Judge.
Just last night, I was just looking at an episode of the old TV show Perry Mason, and (and after all these many many years of looking at Perry Mason ), I thought to myself: I wonder
why the Judge 'knocks' on his desk, almost like a ritual as if to 'say'; So, Mote it Be

The Lion King phonetically: LIE-IN, is the Wizard who creates the Lie i.e the Illusion, which I believe this duality dimension Earth to be, that is: A Lie.

In my past comments on YouTube (before YouTube 'banned me for life) I've often referenced to our Opponents, especially the One Eye/Bears( the one percent of the one percent) as Wizards because they create, out of thin air, our illusion.

I'm not surprised that a Lion illustration is on the cover of The Wizard of Oz
book.
Perhaps to say; The Illusion' lies within?

I also found this information about the word Knock interesting;

Knocked up in the United States, amongst females, the phrase is equivalent to being enciente, so that Englishmen often unconsciously commit themselves when amongst our Yankee cousins. [John Camden Hotten, "The Slang Dictionary," London, 1860]
~~~~~~~~~~~~~~~~


The Vesica Piscis is the creation of the male and female's 'marriage or intercourse.
What's also interesting is (although not in this etymology definition),
the word 'banging' is also slang for intercourse as well.

And last but not least, I find your connection of the watermelon, very intriguing
as you may or may not know that our Opponents, have always used the 'watermelon' as a derogatory connection to Black People, especially during the time period of chattel slavery, however the watermelon and Black People connection still exists today.

Perhaps the Alchemists hidden and symbolic meaning of the Nigredo being the ' melon'
that provides the fruit?

The fruit is also the knowledge earned from much endeavor (the good, the bad and the ugly ) which may explain Gandalf's melon command.

Maybe Everything is connected?