I don't know why I remember this in such detail all these years later, but I do.

When we were kids, one of my little brothers had a ton of stuffed monkeys, including an orange one called Orange José (to distinguish him from Invisible José). After a bit of searching, I found this photo of the exact monkey he had, produced in 1982 by Dakin, on eBay. It's weird seeing that face again. 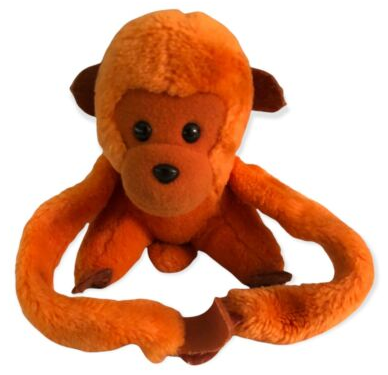 On Monday, August 31, 1992, my brother announced that Orange José's Uncle Honkard (represented by the same stuffed toy as José himself) had just turned 102 and that he needed a birthday cake.

Monday nights were Family Home Evening, and each week a different family member was assigned to prepare refreshments. It happened to be my brother's turn that week, and so he baked a chocolate birthday cake for Uncle Honkard, following a recipe in one of our mother's cookbooks -- but he forgot one little thing: the sugar! So we got an unsweetened chocolate cake, which tasted pretty bad. It later became the subject of a rhyme, patterned after the famous one about the Gunpowder Plot:

Please to remember
The eve of September
Honkard cake, chocolate unsweetened
Isn't it loco
That unsweetened cocoa
Should ever have been eaten?

In the following years, there were a few attempts to celebrate Uncle Honkard's birthday again, this time with deliberately unsweetened chocolate cake ("Honkard cake"), but our mother would never allow it. (You weren't normally allowed to just bake a cake because you wanted to, especially an intentionally unappetizing one.)

The rhyme makes it easy to remember "the eve of September," but I have no real explanation for the fact that I've always been able to remember so effortlessly that Honkard's birthday was first celebrated in 1992, and that he turned 102 that year. That makes him 132 today, a number that has turned up in recent syncs.

Now, thirty years later, I am "loco" enough to drink unsweetened cocoa from time to time, just bitter cocoa powder and hot water -- which I suppose is a bit scandalous in this blogging circle, where even preferring dark chocolate to milk is considered degenerate. Blame it on Uncle Honkard, I suppose. I'll have a cup today in his honor. 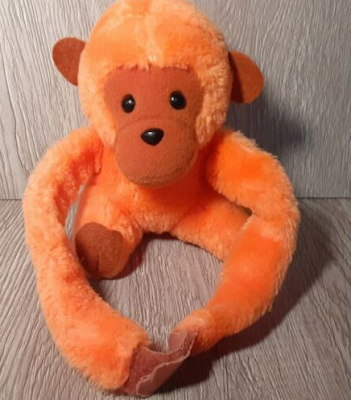 as this begins there's a blue? moon with some sort of bird sounds. if anyone can identify them.

In my second year at college, there was a brief craze for an invented horrible hot drink called "Cheapex" - which was one flat teaspoon of the cheapest brand of "chocolate" drink, made with water and "the minimum of milk". It certainly was cheap, and so difficult to drink that it was quite a lasting beverage.

Shortly afterwards another friend invented a fashionable dessert called "Strawberries in their natural surroundings"; which was tinned strawberries, with lumps of lime jelly (what you would call jello) floating in the syrup. He actually entered this for a national recipe competition - but it did not win a prize...

Around the same time as the Honkard cake, it was popular to put cold breakfast cereal (Chex or Crispix) in a bowl with butter, chili powder, fennel seeds, and Worcestershire sauce, microwave it for a couple of minutes, and eat it. For some reason this concoction was known as Disgusting Mash, even though it tasted pretty good and didn't involve mashing anything.

It's not really that bitter -- comparable to black coffee or sharp Cheddar, both of which I also enjoy. I do draw the line at "bitter gourd," though, a common vegetable in Chinese cuisine which is pretty much what it says on the tin.

"Orange monks" (with saffron-dyed robes) are common in Therevada Buddhist countries. And in the allegory of the vinegar tasters, the Buddha perceived as bitter what Laozi perceived as sweet.

Also consider that the moon-keys (monkeys) played a starring role
in the Wizard of Oz. ( Ahhhhs )

The moon-keys worked for the Green Wicked Witch wearing her Black Saturn Hat and
controlling Dorothy's " Time" via the Hourglass.
The X when contained inside of a Square/Cube is an Hourglass symbolic of the control
of Time.
The X is also a sideways cross.

Interestingly the moon-keys
were a steel blue color, perhaps symbolic of a blue moon?

If you recall in the movie, it was the moon-keys who stole Toto as Dorothy, Lion, ScareCrow, and Tin Man walked through the haunted forest on their way to Oz.

Toto of course being symbolic of the Star Sirius in the Canis Major Constellation.

There are also two owls with red eyes in one of the haunted forest scenes in the Wizard
of Oz, as well.

Interesting the information about the Monks.
As I think I shared with you , the Past Life Reader who ( in 1974 ) told me that
I had a Past Life incarnation in Atlantis and a past life incarnation as a Monk in Tibet.

Also as I shared with you, I found the Past Life Reader ' coincidently' in 1974 through the Dayton Daily News Classified Ads section.

I did not know the Past Life Reader, nor did he know me.

Also as I shared with you previously, the Reader told me of an event that happened
in my Soul's incarnation in Atlantis which was Exactly the same as many of my recurring dreams that I began having in 1965 after my grandmother passed over into spirit.
Those dreams of levitation I still have to this day.

Levitation is a Siddhis Power.

Also regarding the incarnation in Tibet, interestingly enough and also at a young age, I've always been attracted to that part of the world, and also to the Asian Culture.

Look what happened the year of Uncle Honkard's birth

I once used that prayer, together with the shorter Leonine one, in a successful attempt to put an end to some poltergeist activity that was getting out of hand. Only later did I find out that it (the long one) is meant to be used only by priests. Oh, well, I suppose I am technically an ordained priest, as most men with a Mormon background are.

When I see "honk", I think of the trickster goose.

I've come to appreciate certain kinds of white, dark and "gold" chocolate (the last is some sort of caramel blend), but milk will always have its pride of place above them. The perils of having a sweet tooth...

While out on Tuesday, I glimpsed a sign bearing the name Adam Hartley, and a guy wearing this shirt. Moon keys... Perhaps the moon is a key somehow? For what, I have no idea.

I guess "honk" is also a link to the whole Clown World memeplex, the Honkler, etc.

I haven't really thought much about the name Hartley Hare itself, but hart is synonymous with stag, which makes me think of the character Basil Stag Hare from Redwall (not that I remember much more about him than the name). Redwall was published in the UK in 1986, just five years after the last season of Pipkins. I wonder if the name could have been an intentional (or perhaps subconscious) homage?

Rabbits and hares are associated with the moon in many different cultures. My brother used to transform some of his stuffed monkeys (not Jose/Honkard, but several others) into "space rabbits" by bringing their long arms up over their heads to make "ears."

Whitley Strieber relates a very early childhood memory of being left out on the front porch alone and seeing the moon high in the sky and a group of big gray monkeys coming up over the hill -- later interpreted by him as a garbled memory of a UFO and gray aliens.

The "Moon Key" could also be a Tarot card. Several important figures in Tarot history, especially in the Golden Dawn tradition (Mathers, Waite, Crowley, Case), have used "Keys" as a synonym for "Arcana," and the 18th of the Greater Keys is called The Moon. An actual monkey (or a creature usually interpreted as such) appears on the Wheel of Fortune in the Tarot de Marseille, and I have suggested that this could have arisen through a misinterpretation of a Hieronymous Bosch painting which actually features an owl.

I remember that monkey/moon-key used to be a theme on some of the blogs from the golden age of synchromysticism (c. 2009-2012). Searching g8ors just now, I found this, which connects the moon-key with the vesica piscis.