Éliphas Lévi on the spiritual meaning of Godzilla

This blind force, which the power of Christianity enchained and cast into the abyss, meaning into the centre of the earth, made its last efforts and manifested its final convulsions by monstrous births among barbarians. There is scarcely a district in which the preachers of the gospel did not have to contend with animals in hideous forms, being incarnations of idolatry in its death-throes. The vouivres, graouillis, gargoyles, tarasques and not allegorical only; it is certain that moral disorders produce physical deformities and do, to some extent, realise the frightful forms attributed by tradition to demons. The question arises whether those fossil remains from which Cuvier built up his mammoth monsters belong really in all cases to epochs preceding our creation. Is also that great dragon merely an allegory which Regulus is represented as attacking with machines of war and which according to Livy and Pliny lived on the borders of the river Bagrada? His skin, which measured 120 feet, was sent to Rome and was there preserved until the period of the war with Numantia. There was an ancient tradition that when the gods were angered by extraordinary crimes, they sent monsters upon earth, and this tradition is too universal not to be founded upon actual facts; it follows that the stories concerning it belong more frequently to history than mythology.

Cuvier died shortly before the discovery of dinosaurs properly so called, and the "mammoth monsters" named or described by him include the mastodon, Megatherium, Mosasaurus, and our own favorite, the Pterodactlyus antiquus.
The tarasque -- a chimerical monster of Provence, supposed to have been tamed by St. Martha, sister of Lazarus -- was later adopted and adapted by D&D as the game's biggest, baddest monster, described as "basically a kaiju" -- that is, a gigantic Japanese movie monster of the kind typified by Godzilla. Only after seeing Lévi juxtapose it with the giant reptiles of paleontology -- "dinosaurs" in the layman's sense -- did I notice how phonetically similar tarasque is to T. rex. St. George is sometimes portrayed in art as slaying what looks like a Coelophysis bauri, so why not imagine St. Martha using holy water and a cross to bring a Tyrannosaurus rex to heel? (No, I'm not proposing that this actually happened; just making connections.) 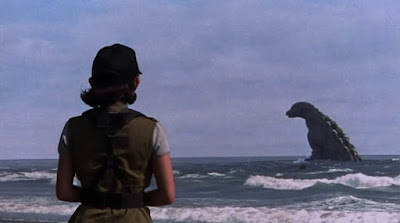 Email ThisBlogThis!Share to TwitterShare to FacebookShare to Pinterest
Labels: Dinosaurs, Éliphas Lévi, Godzilla, Martha, The highway is for gamblers

Hi William, hope you don't mind my asking - how is it going with your praying the Rosary?

I've been seeing a few blog entries such as this:
https://pushingrubberdownhill.com/2022/08/18/they-fear-the-rosary/

Which makes me think that it must surely have been The Holy Spirit leading you to such prayer!
If I had the self discipline to learn it and pray it consistently, I would seriously be out looking to buy some Rosary beads myself...

Thanks for asking, Carol — and no, it’s not “off topic” on a post about using the Cross to tame a T. rex!

I’m still praying the Rosary daily, as directed by the Spirit, and will be posting about it soon.