My last post, "When that gorilla beats his chest," featured this poster for the movie Godzilla vs. Kong, which was originally going to be released in 2020 but was delayed for the usual reason. 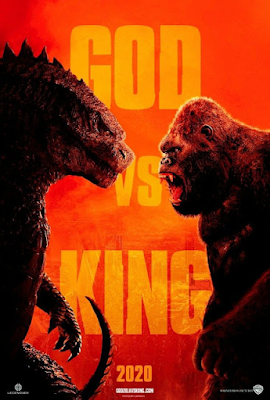 This synched with, among other things, these lyrics from The Script:

Besides the explicit mention of King Kong, it also says "You can talk to God," a link to the "God vs. King" tagline. Doing a little research online, I find that Godzilla vs. Kong features a deaf character played by a deaf half-Asian actress (Kaylee Hottle, Korean-Caucasian). The music video for the Script song, "Hall of Fame" (2012), also features a deaf character played by a half-Asian actress (Ariana Emnace, Filipino-Mexican).

Godzilla is a giant reptile from the sea, but (a commenter informs me), his name comes partly from the English word gorilla. The original Japanese name, Gojira, apparently created before the monster's reptilian nature had been decided on, is a portmanteau of gorira ("gorilla," from English) and kujira ("whale").

Kong, of course, is a giant gorilla. Where did his name come from? According to Wikipedia:

[King Kong creator Merian C.] Cooper was fascinated by [his friend Douglas] Burden's adventures as chronicled in his book Dragon Lizards of Komodo where he referred to the animal as the "King of Komodo". It was this phrase . . . that gave him the idea to name the giant ape "Kong."

The land-monster Kong and the sea-monster Godzilla made me think of Behemoth and Leviathan. In my post "Mr. Owl ate my metal worm," I noted that the giant fish Bahamut, the Arabic equivalent of Leviathan, has a name that comes from Behemoth; while Behemoth-equivalent Kuyutha, the giant bull, has a name that is likely a corruption of Leviathan. There is an obvious parallel here to the way in which Godzilla and Kong got their respective names.

Bahamut is also the name, in D&D, of the king of all metallic dragons, so I connected the name with the Metal Worm in the palindrome. Bahamut -- the sea monster whose name comes from a land monster -- corresponds to Godzilla, so Godzilla is the Metal Worm. The Metal Worm's antagonist is Mr. Owl. As it happens, there is an extremely popular YouTube video (nearly 30 million views) that takes the Godzilla vs. Kong trailer and digitally replaces Kong with a cat -- a cat named, of all things, OwlKitty.

Cat vs. Godzilla also ties in with "Immediate confirmation that Michael is Mr. Owl," in which -- besides referencing the Metal Worm palindrome yet again -- I mention seeing a gecko and thinking "Hey, it's a dragon!" and then later having to rescue a different gecko from my cats. "When that gorilla beats his chest" also included a gecko anecdote, pairing the gecko not with a cat but with a moth -- Godzilla vs. Mothra?

To the Japanese, Gojira suggests "gorilla-whale." To my own ear, Godzilla is God + Zillah. Adah and Zillah are the two wives of Lamech in Genesis and were a source of deep fascination to me as a child. The contrast of A and Z, together with the fact that Zillah probably means "shadow" in Hebrew, led me to envision them as opposites -- Adah as a very pale white woman, and Zillah as a very dark-skinned Indian woman.

Much later, in college, I knew two women, roommates, who exactly resembled my childhood image of Adah and Zillah; I always thought of them by those names, and now I find I can only remember the real name of one of them! For some reason, the 2002 Steve Earle song "Ashes to Ashes" is also closely associated in my mind with these two women. (I think it's just that I started listening to the song about the same time I met them, and its overall vibe fit "Adah's" personality.) The lyrics do have a bit of Godzilla-vs.-Kong type imagery.

Searching my own blog for godzilla just now, I found a dream I had forgotten about, recounted in the post "On the threshold of lucidity," in which I watched a sea serpent (Leviathan) transform first into "a bipedal Godzilla-type creature" and then into a woman "who reminded me a bit of the actress Sarita Choudhury." As you may have gathered from the name, Sarita Choudhury is of Indian extraction, and she has dark skin. Looking her up, I find that, like the other two actresses mentioned in this post, she is only half-Asian -- though as far as I know, she has never played a deaf character. That dream ends with me being bitten by a poisonous snake, though, and adders are proverbially deaf.

Anyway, God-zillah means "God's shadow." In one of J. W. Dunne's books (I'll have to look it up later), he relates a dream in which he became aware that God's shadow was cast over the entire world, and he asked his angel guide how it was possible that people could not see something so obvious as that enormous shadow. "Because it has no edges" was the angel's reply.

(I am working on a theological post that keeps being delayed by these syncs. In it, I happen to quote Dunne: "Oh, God! Allow us to reach the open sea!")