Some months before all this owl business started, one of my students noticed that racecar spelled in reverse is racecar. I told her that this was called a palindrome and gave another example: the sentence "Mr. Owl ate my metal worm."
This morning, while I was reading Mike Clelland's book The Messengers: Owls, Synchronicity, and the UFO Abductee, that palindrome came back into my mind, and it occurred to me to wonder if it might mean anything.
For starters, what's a "metal worm"? Well, worm can mean "dragon." In D&D, "chromatic" dragons (black, blue, green, red, etc.) are evil, and "metallic" dragons (gold, silver, bronze, etc.) are good. The king of the metallic dragons -- the Metal Worm par excellence -- is the Wyrmking Bahamut. The name Bahamut is taken from Arabic mythology and is cognate to the Hebrew Behemoth. In the Arabic version, though, Bahamut is a giant fish, and Kuyutha (generally assumed to be a corruption of Leviathan) is a giant bull, reversing the Hebrew identities. 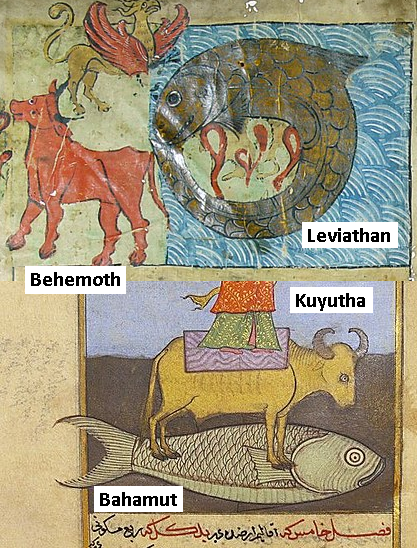 So the Metal Worm corresponds to Behemoth, but Behemoth-as-Leviathan, Behemoth as a whale. The name Bahamut evokes both of these mythical monsters as one.
Regular readers will get where I'm going with this. In my April 1 post "Call me Ishmael," I discussed a D&D monster called a behemoth, described as "a killer whale with four stubby legs," and connected it to the then-ongoing sync-stream relating to the many-eyed whale of John Dee.
This little train of thought, taking me from "Mr. Owl" to a killer whale, had taken place while I was reading The Messengers. At this point I returned my attention to the book, turned the "page" (virtually; I was using the Kindle app), and saw that -- completely unexpectedly in a book about owls and UFOs -- the next section bore the heading "Orcas in Puget Sound." It related a story about how "approximately three dozen orcas surrounded a commuter ferry as it crossed Puget Sound . . . carrying sacred tribal artifacts" from a Seattle museum back to the homeland of the Suquamish tribe. What was this story even doing in this particular book? The owl connection was tenuous indeed:

The orcas, like the owls, are animals considered devoid of any higher consciousness by the watchdogs of our consensus reality. But nonetheless they are showing up as totems at an important moment, they are presenting themselves as a beautiful example of this attuned symbolic power. This wasn't a dream vision of orcas, they were physically there, playing the role of escort for something sacred on its journey home.

In other words, this story is inserted more or less randomly in a book about owls. Whales are never mentioned again, although their similarity to owls may be deeper than Clelland himself notes. The book is called Messengers because that is one of the traditional roles of the owl in mythology: The owl flies into the dark, representing the unseen realm, and returns with a message. Likewise, the whale dives deep into the sea and, unlike most marine animals, returns regularly to the surface. It, too, would make a good mythological "messenger."
If the Metal Worm is Bahamut, alias Leviathan, the statement that "Mr. Owl ate my metal worm" takes on an added significance -- because one of the things the Bible says about the Leviathan is that God will give it to his people to eat. "Thou brakest the heads of leviathan in pieces, and gavest him to be meat to the people inhabiting the wilderness" (Ps. 74:14). "Rabbi Johanan says: In the future, the Holy One, Blessed by He, will make a feast for the righteous from the flesh of the leviathan" (Bava Batra 75a).
Those who eat the Metal Worm are (a) the people inhabiting the wilderness and (b) the righteous in the Messianic Age. The owl is a proverbial creature of the wilderness in the Bible. The Psalmist laments, "I am like an owl of the desert" (Ps. 102:6). Jeremiah says, "Therefore the wild beasts of the desert with the wild beasts of the islands shall dwell there, and the owls shall dwell therein" (Jer. 50:39). And who shall inherit the Messianic Age? According to Daniel, "they that be wise" (Dan. 12:3).
at July 20, 2022

"And I am a snake head eating the head on the opposite side .... I palindrome I"

"They call me Dr. Worm, I'm not a real doctor but I am a real worm"