Following up on a sync, I lunched at a restaurant called Six Owl Door. The food wasn’t good, and absolutely nothing interesting happened while I was there. So much for that.

Later the same day, I stopped at a used bookstore I hadn’t been to in several months. Besides books, they also have a little corner where they sell various secondhand knickknacks. Today they had a framed jigsaw puzzle for sale — depicting six owls. 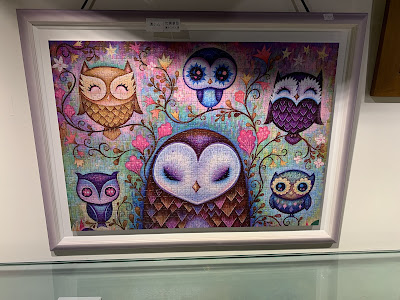 Update: Debbie left a comment saying she had searched for owls, bears, and monkeys. Unlike owls and bears, monkeys were not something we had been discussing, so I asked what prompted her to add them to the mix.
Just after posting that comment, I had a sudden impression that I should look up. I did, and there on the top shelf of my wife’s tchotchke cabinet, looking over the shoulder of a teddy bear, was Sun Wukong, the Monkey King of Chinese legend. 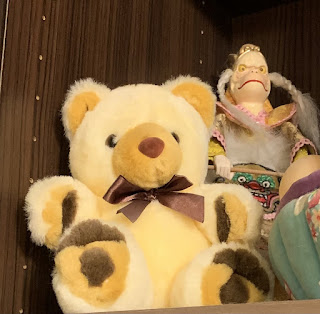 Email ThisBlogThis!Share to TwitterShare to FacebookShare to Pinterest
Labels: Owls, The highway is for gamblers

I've got a few more 'weird' coincidence syns for ya.

You wrote : "Speaking of biblical 42s, you might note in connection with your interest in "Bears" that the she-bears summoned by Elisha mauled 42 boys (2 Kings 2:23-24). These were some of a larger group of boys that had been mocking him by saying, "Go up, thou bald head! Go up, thou bald head!"

My response:
This morning I thought about the above reference you wrote about the Bears and the bald head so I decided to google Owl, Monkeys, and Bears and
Lo and behold I found this very intriguing video below.

I've seen this movie 12 Monkeys years ago,with Brad Pit and Bruce Willis.
What's interesting and in light of the recent fear drumbeats for the new Monkey Virus,
I found this video and especially this clip of the movie very intriguing indeed.

In this vid clip hidden are a few clues and recent syncs per our dialogues.

1. The 12 Monkeys is a Sci-Fi futuristic dystopia movie about Time Travel and a manmade Virus.

2. Bruce Wills' character, James Cole is Bald. (recall my previous post about
my perspective about 5g NexGen technology and what I believe the reason why the trendy 'head' without foliage/hair.

3.At marker/frame 0.11 in this clip, it appears that there is a drawing of a targeted area on the map that James Cole is holding. I think that outline shape is an Octagon.
The Octagon also known as the Union Jacket is a VERY common (most times hidden) symbolism
in the Bears aka Wizards aka One Eye, Alchemical work.

4. Also at marker/frame 0:19-0:30, James Cole is climbing up from the dark (the manhole/pipeline) into the light and recall my previous posts about the Nigredo in Alchemy.
I also found it interesting the name Cole (Coal) , the Coal itself being the Blackening.

Also I found this very interesting etymological meaning of Coal:Old English col "charcoal; live coal, piece of wood or other combustible substance, either burning or having been burned.
Especially this part: Greek glauk eis Athenas "owls to Athens."
And this part as well:
anthrax (n.)
late 14c., "severe boil or carbuncle," from Latin anthrax "virulent ulcer," from Greek anthrax "charcoal, live coal," also "carbuncle," which is of unknown origin; probably [Beekes] from a pre-Greek language. Specific sense of the malignant disease in sheep and cattle (and occasionally humans) is from 1876.

(Interesting, the reference to sheep and cattle, which our Opponents have branded
us to be)

5. Also in this video clip there is a scene where James Cole is climbing from under a car with the license plate from the Keystone State. The Keystone State of course being PA.
Philidelphia is on the 77the Merdian West.

3. Also in the clip,are the Owl and the Bear.

4. Also I thought it interesting that in the staircase scene with Brad Pit's character's Jeffrey Goines, Goines' gestures with his fingers several V signs and The Devil Horns.
In the movie Goins' father is a very wealthy virologist.

Also in the staircase scene, a man dressed in suit and time (symbolic of commerce) falls down the stairs.
Recall my recent posts about the 3 Falling Downs of Biden, which I think have been PSYOPs
messages , symbolizing the Falling of the American Empire, especially the Middle Class who
fuels the Economic power of America.

I also found it very interesting the recent Ivana Trump 'falling down' the staircase.
hmmmmm

5.And last but not least, James Cole is running through a wooded area (recall my previous
posts about the Green Man and the Woods)

At marker/frame 1:50-1:55 in the vid , Lo and Behold we see James Cole as the Druid Green Tube Man with outstretched arms forming the letter V.

I'm going to find this movie online and rewatch it as it has piqued my interest given our recent dialogues and recent World Stage events.
I'm sure this movie is chockful of very interesting hidden symbolism indeed.

There’s a D&D monster called an owlbear, which is pretty much what it says on the tin. It’s a clever variation on the classic griffin, I think. Just as the golden eagle is the most lion-like of birds, the owl (because of its bulky appearance and round face) is the most bear-like.

Which bird is the most wolf-like? If you answered “the raven,” you’re absolutely right. One of the two books I bought today in the bookstore with the six-owls puzzle is Bernd (Bernd!) Heinrich’s Mind of the Raven: Investigations and Adventures with Wolf-Birds.

I’m curious, though: What prompted you to add monkeys to your owl/bear search?

You wrote: " Unlike owls and bears, monkeys were not something we had been discussing, so I asked what prompted her to add them to the mix"


My response: Because of all the media drumbeats of the MonkeyPox.
The BRs aka Bears are ALWAYS in the Mix William.
Who do you think steals all of the Honey?

Interesting your new book authored by Bernd Henirich, is Bernd a BR perhaps? Perhaps
a bear of the Polar kind?
Lots of BRs in Germany, England, Switzerland and Greenland, which are their Home(s).

I believe that I (my Soul ) have a very deep BR connection/incarnation.
If you recall I shared my belief that I am paying back a Karmic 19 debt because
of previous incarnations when I abused the Siddhis Powers.

Recall my dreams about Steiner
and my dream I had on 11/22,2018 I tilted: Oscar in Switzerland.
I've shared the Oscar dream with you before, so I won't repeat it, but what an enlightening
rabbit hole the research of the Oscar dream reveled.
Especially about the BR's and BERN who the Bears are also the Octagon,
who follow the 8-point Star, Venus.

Ring around the Rosys?

I'm beginning to also think that perhaps when our Soul reincarnates in physical body, our Soul chooses to come through a particular blood line especially so the RH negs. My grandmother's matriarch side were Germans.

However our skin has very little to do with anything mystical. If nothing else, it hides and blinds us from the truth.

I (my Soul) also have a Wolf connection as I think I shared that with you several months ago as well.
My name Debra also has the 'hidden' BR, plus the BEE.
A little Bear, a little Honey.

And adding a little 'lightheartness ' to the mix, my family (including my grandmother
and grandfather) lived in West Dayton off of a major East West Street called Germantown, which in West Dayton is where many of the Germans settled.

The Germans also settled in Indiana as well. Indiana is where my grandmother's matriarch side of the family were from.

Could Indiana, be In-Diana? The Deity Diana is very well entrenched in many mythological ideologies , no?

My grandmother and grandfather and father were all born in KY.

In the 1800's The Wright Brothers lived in West Dayton, of course way way way before West Dayton became the hood which happened in the late 1970's unfortunately;--(


If we look deep enough, we'll see that Everything is Connected.