Last night, I read this in Clelland's book about owls:

The woman I spoke with is Jacquelin Smith, and along with having UFO contact experiences, she is an author, psychic and animal communicator. Her first book from 2005 was titled, plainly enough, Animal Communication.

This reminded me that I had on one of my bookshelves a book with the very similar title Animal Speak, by Ted Andrews, which I had picked up for a dollar years ago at a used bookstore but had never so much as opened. Today I decided to take it down from the shelf and see if it had anything interesting to say about owls.
I opened the book at random -- a 383-page book which, the cover promises, covers "creatures great and small" and "includes a comprehensive dictionary of animal, bird, and reptile symbolism" -- and these are the pages I got: 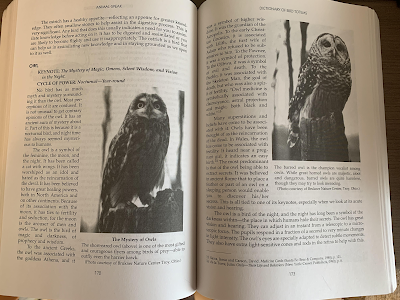 That's right, I just happened to open up directly to the first page of the entry for "Owl." Either the book's previous owner consulted the owl article a lot, or else it's just one of those weird coincidences.
Skimming what Mr. Andrews has to say about owls, I don't find too much that's new to me. However, a few passages caught my eye. The first:

To the early Christians and Gnostics, [the owl] is associated with Lilith, the first wife of Adam who refused to be submissive to him.

In my last post, I said that Adam is (according to Joseph Smith) the same personage as Michael the Archangel, and the title of the post was "Immediate confirmation that Michael is Mr. Owl." One possible meaning of the title "Mr. Owl" would be a man who is married to an owl.
Andrews also mentions how owls blink:

Like humans, they blink by closing the upper eyelids, giving them a human expression which has added to the mysticism of owls.

In "The Locust Grove crop circle," where I first proposed that Michael was Mr. Owl, I said that Michael means "Who is like God?" I wanted to add a picture of an owl with the word "Who?" so I searched the Web for one. As it happens, I ended up choosing an animated gif of an owl blinking.

Finally, this passage suggests that "Mr. Owl" might not actually be an owl at all but a hawk.

Some owls have a balancing raptor. The owl is lunar and nocturnal, while some raptors are diurnal and solar. Owls and some hawks will share the same territory, one hunting and using it by day, and the other by night. They don't necessarily get along, but they do tolerate each other in varying degrees. These can be seen as balancing medicines, and rituals and meditations can be used with the owl and its solar equivalent. They can be used to balance the male and female.

There follows a table of owls species, each with its corresponding species of hawk or falcon.
According to this article on "The Archangels and their Divine Responsibilities,"

Of all the Archangels, Michael is the head of this order. He is often depicted with sword in hand. He appears to me as bright and shimmering golden energy (this color is associated with the higher heavenly energy chakras located well above the head), as an image of a brilliant golden wing, in human form dressed in white with wings and carrying a sword or glowing with a gold aura, and in the form of birds of prey, such as falcons and hawks.

Connecting Adam with the palindrome "Mr. Owl ate my metal worm" is appropriate because Adam has many palindromic links. One of the most famous palindromes is "Madam, I'm Adam" (sometimes expanded to "Madam in Eden, I'm Adam") -- a sentence which would have been addressed to the palindromically-named Eve. Their son, of course, was "Cain, a maniac."

Ok, this is REALLY starting to get extremely Strange!!


You wrote;"Finally, this passage suggests that "Mr. Owl" might not actually be an owl at all but a hawk.

Here is the backstory.
First of all, this story was NOT a dream.

My desk is in front of a window which looks out to the front porch, although there is a clearing around the house, the house sits on a mostly wooded parcel.
The den is right off the living room and near the front door.

One day back in 2007 (as I was sitting in the den on my computer, our dog Tor wanted to go out to potty. I let him out and went back to the den and to the computer.

A couple of minutes later I let Tor back inside the house. I continued on the computer,
just reading and looking at videos on YouTube.

About an hour or so later I decided to go out and sit on the front porch.
When I opened the door, Lo and Behold a Cooper Hawk was laying on the front door mat, very close to the door, face down with its head turned to the south of the property.

I was shocked!! I thought how did this Hawk get here??!
As stated for an hour while I was on the computer after I let Tor in, I saw nothing going on out of the ordinary on the porch, nor did I hear anything.

The Hawk was obviously dead, and while it's true that many times birds will fly into a window which has happened here (not all the time, but in the Springtime occasionally it happens)

On the occasion a small cardinal or red bird hits the window, and if I'm in the kitchen or living room or the den, I can hear if a bird hits or doors, so I'm thinking I most certainly would have heard something if that big Hawk hit the window of the door.
I didn't hear Anything at all!!
Also The Hawk didn't appear injured in anyway.


And there is no way that Tor could have killed the Hawk when he went out to potty, because when I let Tor back into the house, the Hawk was NOT there.

I called Marshall(who was at work at the time ) on the phone
and told him about it and we were so perplexed as to how that Hawk got there.

I took a picture (which I still have) of the Hawk, and pulled out three feathers to keep,
and wrapped the poor guy in a cheesecloth fabric and Tor and I held a little ceremony
down by Todds Fork, and I sent Mr. Hawk off to float down the stream.

Marshall and I talk about this incident occasionally as we still have no clue
as to why or how it happened.

So you can imagine how surprised I felt when I read this new post about the Hawk!!!!!

Recall my comment about ME having many dreams and esoteric experiences regarding DOORS
and doorways, and gates.

See this post, where I quote Whitley Strieber's confabulated owl story and relate it to my own confabulated hawk story.

I read the post but not quite sure of its message as far as how it relates
to my personal story about the Cooper Hawk.

If you are suggesting that my memory of the Hawk story is a confabulation filled with fabricated, misinterpreted, or distorted information, I assure you that it is not.

I have the photo of the Hawk.
No one put the Hawk on the porch and laid it in front of the door or I would have seen them from the window.
Tor did not kill the hawk as nether Tor nor the hawk was injured.

Although and I understand many of my esoteric experiences and dreams may seem unbelievable, however and again I assure you that none of what I've written on your blog has been fabricated.

I just sent you the photo of the Hawk to your gmail account.

Debbie, I wasn’t implying that at all. It was just an example of the interchangeability of owls and hawks.

This is all really intriguing.

You might enjoy a meme I found earlier: https://imgur.io/gallery/aO51IJa

Immediately after reading this post, I clicked over to this:

The text doesn't seem connected, but the title screamed "SYNCH!"

@Craig Davis, there's Adam and Eve in that post you linked

Now "Sun and moon have always been symbols of male and female, respectively..." Sun and Moon like earlier.

So Adam and Eve correspond to Sun and Moon?

Then shortly after the post referencing Ouroboros, a snake consuming its own tail, this post linked on Synlogos: