Okay, now RV Tournament is just messing with me 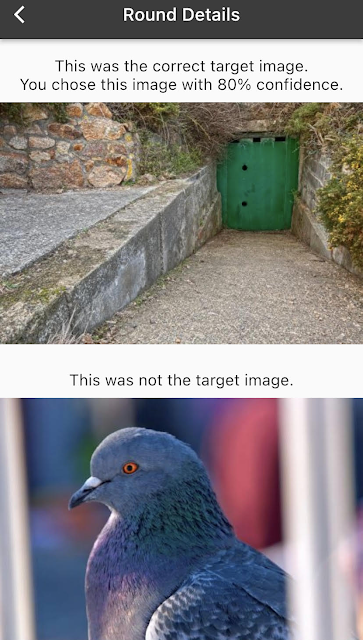 If I had seen a green door, I would have dismissed the image as coming from my own mind, not the target. I didn't see that, though; I just saw the general geometrical layout, with the diagonal lines of the path leading to the verticals of the door. 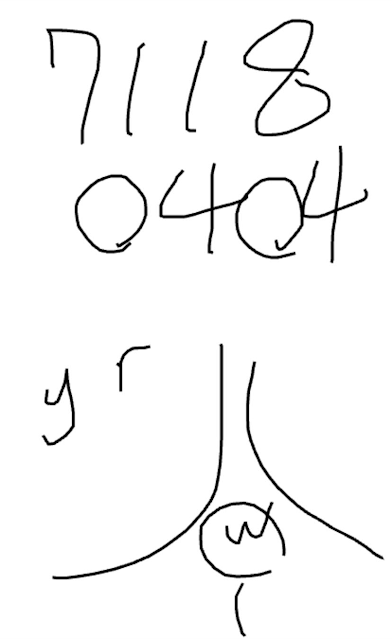 The scribbled lowercase letters are notes on color: yellow, red, white. I guess the y and r are a hit, since I put them in an area where the wall is kind of orangish. The white circle on a stem (I thought it might be the back of a person's head) corresponds to nothing in the target image, although I suppose conceptually it is consistent with the fact that this is a path leading to a door, the sort of thing you would expect a person to be on.
As I have said before, my mental images when I do this are so crude and low-res as to be completely useless for any imaginable practical purpose. I wonder, though, if you had access to the notes of hundreds of people all remote-viewing the same target, if you could use them to reconstruct a pretty detailed "composite sketch." Obviously, whoever is behind RV Tournament (it's supposed to be someone called Michael Ferrier) has access to just that. I hope that in addition to the sort of crude statistical analysis he is reporting -- x% of users' guesses are right, which has a y% chance of occurring by dumb luck -- there are "composite sketch" studies going on behind the scenes. What you'd do is give 100 viewers' notes on the same target to someone who doesn't know what the target image was, and have them sift through them, noting common threads and trying to reconstruct the original image. If most viewers' images are roughly of the same caliber as my own, I bet you could get some fairly high-quality results. If the composite sketch experiments are a success, the next step is to get a contract with the military, law enforcement, CIA, NASA, or whoever. Unbeknownst to RV Tournament users, some percentage of the coordinates they are given will actually be keyed not to the stock images we are told they are keyed to, but to genuine unknowns on which the customer wants to gather intelligence. Then the next day show the users two stock images, neither of which was really the target, and let them all think they were just unlucky that day.
My money says they're already doing this, because, really, how stupid would you have to be not to think of it?
This green door thing really makes me wonder about the mechanism behind these psychic flashes, though. If I saw the target image, even through a glass darkly, anything that even hinted at possibly being a green door would be the first thing to jump out at me. That -- not the funnel shape formed by the path and jambs, and certainly not the vaguely reddish-yellow color of some of the stones in the wall -- would have been my primary impression. This suggests the unsettling possibility that RV images are not direct perceptions by the viewer but communications from a differently constituted mind.
Really, though, a green door! What are the odds? Where does extrasensory perception leave off and synchronicity begin? And what's next -- owls?
So far, I've been doing extremely fast-paced gestalt viewing, where I just scribble down my first impressions in five seconds or less. Once I've gotten into the groove, I might try my hand at some more leisurely, detailed Courtney Brown style techniques, using a pencil and paper rather than a touchscreen.
at August 16, 2022

Email ThisBlogThis!Share to TwitterShare to FacebookShare to Pinterest
Labels: Green Door, Remote viewing, RV Tournament, The highway is for gamblers

You saw the back of the cameraman's head.

On a whim, I bought this book from a local shop last week. They charged me $34.95 instead of 33, and at first I was too enamoured with the book's contents to notice the owl on the cover. Some good omens?

I'm getting better at this. I currently have a Z score of 1.7, which puts me in the 95th percentile.

I'd say so. Does 34 mean anything special to you, or is it just a number that keeps showing up?

34 is the atomic number of Selenium, which is a link to the Moon.

John Dee used the letter delta (the door) to represent the union of 3 and 4 because it looks like a triangle and is the fourth letter of the alphabet.