Precognitive dream: Carrying a pet in a room where it's raining

Last night I had a dream that I picked up my black tomcat Scipio and carried him upstairs to my study on the second floor. When I entered the study, I found that it was raining hard outside and the roof was leaking (which makes no sense on the second floor of a three-story house, but that's dream logic!), so much so that it was basically "raining" in the study, too. Water had gotten all over everything. Fortunately, my second-floor bookcases are actually cabinets with glass doors, so I figured the books themselves would be okay, but I would still have to clean up everything else. I carried Scipio downstairs and then went back up to the study to clean. When I opened the door the second time, though, everything was dry, so I decided cleaning was unnecessary.
A short vignette followed in which I had stopped at a food stand on the side of a dusty road but had decided not to buy anything because the food (Taiwanese-style luwei, various braised dishes) was all soft and overcooked and just didn't look very appetizing. I was getting ready to pull back onto the main road when I noticed a man standing there holding a stop sign. It was a bit smaller than a normal stop sign, and it wasn't fixed in the ground, so I wasn't quite sure if I was legally required to stop or not. Then he turned the sign around so that I could see the back surface, on which someone had painted by hand "IRAQ WAR." I decided it must just be some dude protesting the war in Iraq, not a legal stop sign, so with some hesitation I pulled out onto the road. It was really very dusty, and the landscape seemed to be some kind of sandy desert environment. I drove a short distance up a hill and came to a little house made of corrugated metal, with a covered carport in the front. Some people were sitting out in the carport area preparing food -- cutting and washing vegetables or something like that. One of them was an old woman who looked Chinese but spoke with a New York Jewish accent. She was saying, "I've always been a great admirer of your country's war in Iraq -- both of them, in fact. I think you guys were heroes. And you know the other thing I admire about your country? You never ask Jewish children to sit on the floor. You always provide these little stools for them."
⁂
In the morning, I checked my blog comments. WanderingGondola had written:

On the bus home, headphones still cranking, I read through the then-freshly-posted "Michael the glove puppet and X the Owl". As my stop drew closer I saw the bus windscreen wipers move once, though rain wasn't evident; at roughly the same time, my music player put on Outkast's Ms. Jackson. The relevance of "Jackson" should be obvious, but there's also a repeated "ooh" in the song chorus that always sounded more like "hoo" to me. And yes, there's an owl or two in the video; one specifically mouths (beak-syncs?) to an "ooh".
As I got off the bus, I realised it was indeed raining lightly. Over the past month there's been several instances of this, as if the sky decided, "Hey, you're almost home, let's turn on the water." As I pulled out my umbrella and began walking, the rain's intensity increased. Just as it seemed it couldn't get any heavier, it eased off significantly -- around the same time that Andre 3000 rapped out, "You can plan a pretty picnic but you can't control the weather" (2:20 in the video). A very weird coincidence.

Mulling over this later, I recalled Wikipedia's notes on how, in Islam, the Archangel is "said to effectuate God's providence as well as natural phenomena, such as rain." That links rather well to that Michael graffiti from earlier, which has "inshallah" ("if God wills" in Arabic) written above everything else.

I noted the coincidence of her having a rain-related sync and my dream about rain. It wasn't until later that I actually watched the video for "Ms. Jackson," though, and realized that the connection was much deeper than just "rain."
Starting around the 2:13 mark, we see André 3000 in a room where the roof is leaking so much that it is basically raining indoors. He is trying to put out jars and pots and things to catch all the rain -- all while carrying a pet in one hand. At first I thought he was carrying a cat in a few shots, but on viewing it again, I think it's always a dog or puppy. There's a cat in the room the whole time, too, though. (We also see an owl several times. André 3000's other famous song is of course Hey Ya -- which means "black crow/raven" in Chinese.)
In the second part of my dream, there is a stop sign that isn't fixed in the ground, and I am unsure as to whether I need to stop. This afternoon, Debbie left this comment:

On Feb 24, 1979 Johnnie Wilder at the height of Heatwave's success, was in Dayton to visit his mother and father and his car that he was driving was broadsided at a 4 way stop. The Stop sign had fallen previously and wasn't replaced.

Update: In the comments, Henri notes the Outkast song "B.O.B. (Bombs Over Baghdad)." How had I never heard of this song?

So I posted about how a dream of mine synched with an Outkast song mentioned in my comments the next day. In the vignette that followed the main dream, I was driving a car and saw a man apparently protesting a war in Iraq by holding up a sign that said "STOP" on one side and "IRAQ WAR" on the other. Now I discover that Outkast also had a song called "Bombs Over Baghdad," and that the music video features people driving around in cars and a giant "STOP." 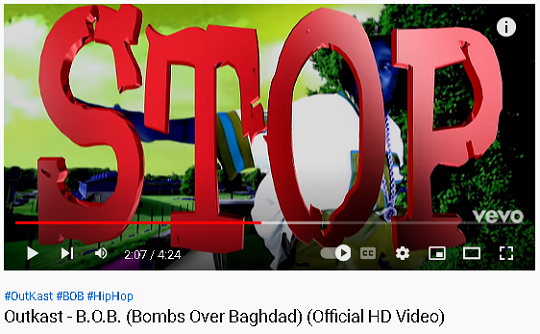 Admittedly, "Hey Ya" is vastly more famous, but as I was reading "André 3000's other famous song is of course..." I was spontaneously anticipating "Bombs Over Baghdad".

Looking through the comments on Ms. Jackson, this recent one by "Noisy Child" caught my eye: "for me, ms jackson reflects the inner guilt that does not let you rest, the house is falling apart but they face it, perhaps representing their mind. until finally after all the storm and disaster they can see the sun rise again, representing redemption".

Last Thursday, a friend invited me along to a showing of Top Gun: Maverick, in which the main character is played by Tom Cruise. The next day, loading my preferred browser -- a Firefox offshoot called Pale Moon, which I've been using for eight years now -- it gave me two "unresponsive script" errors. Being, uh, quite the tab hoarder, I'm used to seeing those, but more than one per session is unusual, and for some reason PM shifted to different tabs after each. The first tab was Wikipedia's article on Japanese light novel and manga, All You Need Is Kill, which was adapted into the movie Edge of Tomorrow, starring... Tom Cruise. (The second tab was this William Wildblood post.)

For the rule of three: Watching TV during dinner on Sunday, I noted an ad for an upcoming airing of Mission Impossible - Fallout, which (of course) features Tom Cruise. The ad used voice clips of him saying, "The storm is coming", and "I am the storm." I seem to recall someone else mentioning a "calm before the storm" several years ago. There's also been a lot of extreme weather activity (flooding and drought) in parts of the world lately.

I'd never heard B.O.B. either. Fat chance of me understanding some of the lyrics, so I looked them up... and we have two syncs on badly-predicted weather. In the first verse, Andre says, "Weather man tellin' us it ain't gon' rain / So now we sittin' in a drop-top, soakin' wet". Big Boi says this in the second verse: "Moving like Floyd, comin' straight to Florida / Lock all your windows, then block the corridors". Clicking on the lyrics for user-submitted annotations tells us that refers to Hurricane Floyd, which was due to hit at the time of the song's writing; apparently Floyd did much less damage (relatively) than estimated.

That was an eagle owl in Ms. Jackson? Another bird of prey reference. Also, in Big Boi's owl vid he mentioned wanting a pet tiger.

Tigers are part of this, too; X the Owl was rescued by Daniel Striped Tiger. The current year is a Year of the Tiger in the Chinese system, and the Chinese word for “tiger” is hu. The similarity to the English who is something the Chinese themselves have noticed. My wife just bought a bunch of tissues with the brand name “Hu Cares” — that is, the Chinese character for “tiger” followed by the English word cares.

My hippie uncle, also called William Tychonievich, used to rock and roll under the stage name Billy Tyger, a handle intended to reference both his (our) own name and William Blake. One of Blake’s Proverbs of Hell is “The crow wished everything was black; the owl that everything was white.”

216 days after "B.O.B. (Bombs Over Baghdad)" was released, Mohammad Saeed al-Sahhaf -- known in the American press as "Baghdad Bob" -- was appointed Iraq's Minister of Information.