Today I was on the road at a time when I would not normally have been; I had just come home and then had to go back out because I had forgotten something. While I was out, my eyes were drawn to a license plate that said MRQ 2310.
It was "Mr. Q" that first got my attention. There's been a lot of talk about "Mr. Owl" on this blog recently, particularly as a reference to Michael the Archangel. On July 29 (also, coincidentally, the day known as "Ghost Door Opens" on the Chinese calendar), I received an email from a woman using a pseudonym that begins with the letter Q, in which she said, "There is no real 'Mr. Q[...]' at this time, so with some of the things I've been reading about guardian angels, I'm beginning to wonder if Michael himself might be my guardian, or at least have an eye out for me."
So apparently Mr. Q is yet another name for Michael. In "More Mr. Owl," I noted that the Mr. Owl title does not identify Michael with the owl but with the owl's male counterpart, the hawk. In "If 6 turned out to be 9," I connected the owl with 6 and the hawk with 9. Note that a lowercase 'q' looks like 9, and that the Japanese word for "nine" is kyu -- a pun used, for example, in the title of Haruki Murakami's book 1Q84.
So what about the rest of the license plate? Well, it's my initials, for starters: 23 = W, and 10 = J. I thought there must be more to it than that, though (these things are always overdetermined), so I thought, "Well, what are its factors? It looks like it's divisible by 77, which is the S:E:G: value of Christ . . ." and, still on my motorcycle, I started doing the math in my head. Sure enough, 2310 is 77 times 30. At that moment, I passed a 7-Eleven convenience store, and I thought, "And 77 is 7 times 11, and -- holy shit!"
Why have I associated the owl with the number 6? Because of a restaurant called Six Owl Door, and accompanying syncs featuring six owls, an owl and six doors, etc. On July 28, Ben left a comment in which he linked to a photo of three doors marked with numbers. 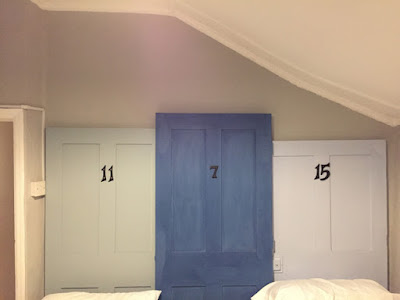 LSP in Grand Prairie, Texas, hosted a horse race for three-year-olds and up, and for most of the maiden race a four-year-old gelding named Moro Flyboy had a clear lead ahead of the rest of the competition, including a horse named “Heavenly Trump.”
As Flyboy, led by apprentice jockey Simon Camacho-Benitez, approached the final stretch of the race, the horse began to veer toward the track’s inside rail.
After flying too close to the sun, Moro Flyboy made contact with the rail and bucked Camacho-Benitez yards from the finish line, which gave way for Heavenly Trump to step up and steal the race (not like that).
The indisputable, Balaam-inspired act of God propelled Heavenly Trump to victory. Camacho-Benitez and Flyboy were reportedly unscathed after the incident.

From the accompanying video, it appears that Heavenly Trump is a white or light-gray horse, ridden by a jockey with a yellow cap.
"Heavenly Trump" is presumably a reference to the biblical "last trump" which calls the dead to rise from their graves, as illustrated on the 20th trump of the Tarot. The article, though, is obviously playing on the similarity of the name to that of Trump, the politician. Well, I made that connection long ago.
I also connected Trump with "The other Trump trump," the Sun. This card, which is associated with Gemini and Flag Day (Trump's sign and birthday), shows a yellow-haired child riding a white or light-gray horse next to a wall. Notice that when Moro Flyboy hits the "wall," bucking the jockey, the article refers to it as "flying too close to the sun."
Moro Flyboy -- Heavenly Trump's rival -- is connected in the article with the biblical story of Balaam, whose mount "thrust herself unto the wall, and crushed Balaam's foot against the wall." Balaam wasn't riding a horse, though, but a donkey -- symbol of the Democratic Party. I suppose this all syncs with Biden's foot fractures shortly after the election, and his recent fall from his bicycle.
at August 02, 2022

Ah, that one slipped past me!