Apparently I remote-view better with delayed feedback -- so is it really remote viewing?

So, this is weird. The way RV Tournament works is every day it gives you a set of coordinates keyed to a target image, and you try to pick up psychically what the target image is. Then it shows you two images and you guess which is the target. The next day, the correct target is revealed, and you find out if you were right or wrong. I'm usually right -- about 80% of the time. 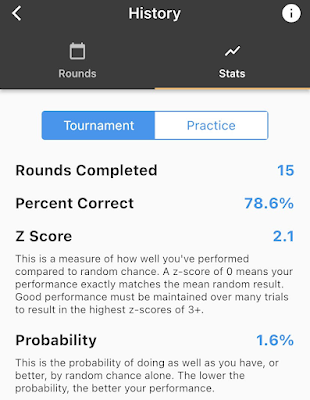 As you can see, the probability of my guessing as well as I have by chance alone is 1.6% -- not an astronomically low number (the sample size is still quite small), but certainly "statistically significant" by most standards. (If you're wondering how it's possible to get 78.6% of 15 rounds right, it's because the latest round hasn’t been judged yet. My track record is 11 out of 14.)
In addition to the daily "tournament" image, RV Tournament provides three "practice" images every day. The procedure is exactly the same, except that the feedback is immediate. As soon as you've made your guess, it shows you the answer. In "practice" mode, I show no evidence of remote-viewing ability whatsoever, guessing right exactly as often as predicted by chance. In fact, I often receive a rather clear psychic flash, but for the wrong image. 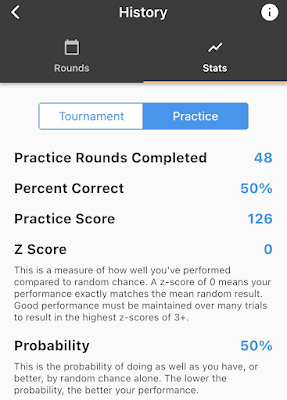 As I've said, 1.6% is by no means an impossibly low number, so one obvious possibility is that I've just been lucky with the tournament so far for no particular reason, and that over time both success rates will approach 50%.
If that doesn't happen, then the question is what is causing the difference. The only difference between the two types of trials is the time between guessing and receiving feedback. (You can also receive cash prizes for doing exceptionally well in tournament rounds, but I haven't signed up for that, so that's not an issue.)
My hypothesis would be that what I am doing is not actually remote viewing in the strict sense, but precognition. Instead of getting a paranormal glimpse of an image located outside my field of vision, I am getting a paranormal premonition of what I will see the next day, when the correct answer is revealed. In practice mode, I try to get a premonition of what I am going to see in a few seconds. Then, a few seconds later, I see both images and make my choice; and a few seconds after that, I see the correct image only. With these two future experiences so close together in time, it is easy to imagine that I might easily attempt to foresee one but in fact foresee the other. In tournament mode, though, the two future experiences are separated by approximately 24 hours, making that sort of mistake less likely.
at August 22, 2022

I know I've shared my perspective about this a gazillion times here on your blog,
but I am absolutely convinced that the Soul transcends Linear Space/ Time.

Recall I also shared a dream that I had in 1990 that tragically came true in 1995.
My friends and family whom I shared the dream with in 1990, and in 1995 when the tragic death occurred in 1995, has not been able to explain (logically)
how it is possible to 'see' 5 years into the future.

However that particular esoteric experience and premonition dream and a gazillion other experiences including telepathy throughout my life, has convinced me that Linear Time is an Illusion.

You might want to check out this interesting video.