Taiwan's mask mandate, which is still in force, allows masks to be removed in special situations -- including (last I checked) eating, drinking, walking, riding a motorcycle, taking a photo, and lecturing -- so I'm pretty much good. My students, who have to sit at their desks without doing any of those things, not so much.

A few days ago, one of my private students said, "It's not fair that I have to wear a mask but you don't!"

Big Ben! I wish I had thought of that.

The Minister of Health and Welfare -- "Taiwan's Dr. Fauci" and the world's most powerful dentist -- was called Chen Shih-chung (陳時中), and his given name is a perfect homophone of 時鐘, the Chinese word for "clock." The Chinese for "stupid" is 笨, pronounced ben, and so Big Ben in London is called 大笨鐘 -- literally, "Big Stupid Clock." 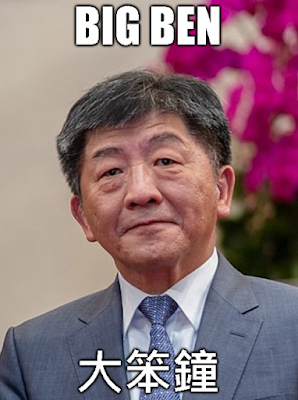 It's just a perfect nickname -- a very clever Chinese-English pun, and (much like "Let's go Brandon") indirect enough to make it playfully irreverent rather than just rude. Forget the old "Tooth Fairy" nickname; I'm never calling him anything but Big Ben from now on.

So imagine my mixed feelings when I discovered, just days later, that Big Ben had resigned! Not in disgrace, mind you, but to focus on his run for Mayor of Taipei -- a position which is generally recognized as a stepping-stone to the presidency. The good news is that Big Ben will likely be in the public eye for many years to come, giving me ample opportunity to talk about him. The bad news is that he hasn't really stepped down but stepped up, and the new guy will probably be just as bad but without the awesome nickname.

Out of the mouth of Babes?

The Big Clock/Saturn's Ring/Chronos/ and the illusion of linear TIME is how our Opponents bind, manipulate and control us.

From my experiences and perspective, of course.

@Wm. Was watching this just before opening your link.

At one point during my networking class today, the lecturer went on a slight tangent, talking about the deep space network NASA uses to keep contact with the Webb telescope. Somehow the chatter further shifted to the Cassini space probe, which was forcefully retired in 2017. One classmate said it was made to crash into Titan, which didn't sound right, but the lecturer got us back on task before I could think on it. I only remembered to look it up after seeing the comments here - sure enough, the Cassini actually crashed into Saturn.

William, that link was a ride. The very title calls back to the "It is time" message I saw, which now brings to mind a friend explaining the difference between chronos (sequential, quantitative time) and kairos (a good/opportune moment, qualitative time). And in my emails I've mentioned my love of stories that play with dimensional manipulation. I do prefer Interstellar over Tenet, the latter was a bit much!

Just now I ran a search for "angel" here on your blog, and "The Reaper of Marseille" stood out with its discussion of Saturn and Father Time. "Seraphim" got me with a repeat of some Numbers 21 verses (Debbie, you might want to read this one), and "Lots of little signs" is a bit syncy too.

On another note, of the movies Arrowsmith listed that were meant for release in 2020, Top Gun: Maverick was by far the longest delayed. Also, "maverick" can be seen as a synonym for "renegade", which (according to early letter 17) was the US Secret Service's codename for Obama.

And while I'm thinking about the birdemic, this is one of the best articles I've read on the subject. It's long but very detailed, and has some very interesting info on the birdemic timeline, Omicron included (FWIW, I haven't been concerned about the virus since that variant appeared): https://theethicalskeptic.com/2021/11/15/chinas-ccp-concealed-sars-cov-2-presence-in-china-as-far-back-as-march-2018/

I clicked on the Black Dog Star link and I'm very impressed with a lot of the information
that mirrors my own.
I was not aware of this blog, so Thank You very much for posting it.

I agree with the creator of the blog's perspective about Saturn's Rings and Baal symbolism are everywhere in our daily life and I believe that the reason why is that our Opponents never cease to remind us as far as 'who's in charge' in this duality dimension.

The wearing of hats in Western Culture especially wide brim hats (which many men back in the 1950's wore) is a 'ring' around our globe/Head.

Of course, the rings we wear on our fingers, especially the marriage ring.

The ring tone of the telephone and (especially in the West) when we answer
the phone, we respond, HELL-low.

Of course Saturn strapped around our wrist in the form of a watch, to make us consistently aware of Time.

Interestingly how the phone especially in cinema has symbolized a transformation.

Clark Kent transformed into Superman ( Transhumanism ) in a phone booth.
In the trilogy of the film, the Matrix, the portal in and out of the Matrix was through
a Phone.

The mobile/cellular phone-X (Phoenix) is serving as a bridge to the Digital Age, The Fourth Industrial Revolution, aka The Great Reset.

The X when encased in a square(cube) (which an X is also a cross when viewed sideways)
is an hourglass.

I was intrigued when I found the post on the Black Dog Star blog about the T/Tea and the cup.

I think I shared here on your blog my 2003 dream which I titled: Tweed.
My Tweed dream was about a man who was following me in a cave, wearing a tweed jacket and holding a saucer and a teacup.
When I approached the Tweed man to ask him why he was following me, he responded
that he would be with me for 9 more years, which 2003 (the year I had the dream) plus
9 equals 2012.

There's nothing new under the Sun.