Life Is Romantic, The Travail of Passion, and the Sorrowful Mysteries

While on the road this afternoon, I fell to thinking about the term Romantic Christian -- designating the approach to Christianity advocated by Bruce Charlton, William Wildblood, Francis Berger, and myself -- and about how it is somewhat suboptimal because it is not a single word and because it cannot be abbreviated without confusion (since RC, in a religious context, normally means Roman Catholic). While my mind was thus occupied, I saw this printed on the back of the T-shirt of the motorcyclist in front of me:

I took this as synchronistic confirmation that Romantic is after all the best term to be using. The T-shirts equation of Romanticism with life also struck me as appropriate, since a big part of the Romantic Christian approach is a focus on Heaven as eternal life (rather than eternal rest, absorption into God, etc.) and on God as the living God, existing in time. An emphasis on life is also typical of the Gospel and First Epistle of John.
Later in the day, as is my habit on Fridays, I prayed the Sorrowful Mysteries of the Rosary, which are (translating): the Prayer in the Garden, the Scourging, the Crowning with Thorns, the Carrying of the Cross, and the Crucifixion and Death of Our Lord Jesus Christ. My meditations on the Rosary are highly visual in nature, the verbal part of my brain being preoccupied with the prayers themselves, and my mental image of the Prayer in the Garden is heavily influenced by the Yeats poem The Travail of Passion (which alludes to all five of the Sorrowful Mysteries).

When the flaming lute-thronged angelic door is wide;
When an immortal passion breathes in mortal clay;
Our hearts endure the scourge, the plaited thorns, the way
Crowded with bitter faces, the wounds in palm and side,
The hyssop-heavy sponge, the flowers by Kidron stream:
We will bend down and loosen our hair over you,
That it may drop faint perfume, and be heavy with dew,
Lilies of death-pale hope, roses of passionate dream.

Today my meditations were also colored by the T-shirt synchronicity: "Life is Romantic: Romantic Crown." Jesus' crown, plaited of thorny plants, was a crown of life, in contrast to the inorganic gold and jewels worn by worldly kings. "Why do ye adorn yourselves with that which hath no life?" (Morm. 8:39).
While imagining Jesus praying among "the flowers by Kidron stream . . . Lilies of death-pale hope, roses of passionate dream," I suddenly realized the relationship of roses and lilies to one of the strange features of the T-shirt inscription: the use of an upside-down W in place of an M. My recent experience with a red dove had led me back to my 2018 post "The Rider-Waite Magician." In that post, I connect the red dove flying upward on the Magician card with the white dove flying downward on the Ace of Cups -- and I note that the Ace of Cups is marked with a W which is actually an upside-down M, confirming that it is an inversion of the Magician. I see now that the birds themselves have the form of a stylized W and M.
As detailed in the 2018 post, the red dove represents the Pillar of Severity and prayers ascending to heaven, and the white dove represents the Pillar of Mercy and blessings descending to earth. The red dove flying to heaven made me think of the Mosaic rite for cleansing lepers (Leviticus 14), which involves killing a bird in a clay vessel over running water (cf. the white dove over a vessel with running water on the Ace of Cups), dipping a living bird in its blood, and then releasing this bloody bird in an open field (cf. the Magician's red dove, surrounded by what Waite calls flos campi et lilium convallium, "flowers of the field and lilies of the valley").
Blood crying to heaven is a familiar biblical expression, and Jesus bled (or sweat as if her were bleeding) as he prayed in the garden. By "coincidence," just before seeing the "Life Is Romantic" T-shirt, I had read this in Éliphas Lévi's Histoire de la magie:

Paracelsus knew the mysteries of blood; he knew why the priests of Baal made incisions with knives in their flesh, and then brought down fire from heaven; . . . he knew how spilt blood cries for vengeance or mercy and fills the air with angels or demons.

He goes on to relate an anecdote from Jean-Baptiste Tavernier about certain Asian magicians who caused a small piece of wood to grow up into a flowering mango tree in the space of half an hour, by cutting themselves and rubbing the wood with their blood.
The Magician card alludes to Gethsemane via the red dove of prayer flying upward, surrounded by garden flowers. The Ace of Cups shows the content of Jesus' prayer in the garden -- "if thou be willing, remove this cup from me" -- and the white dove descending alludes to Heaven's response: "and there appeared an angel unto him from heaven, strengthening him."
The Yeats poem begins with an open door: "When the flaming lute-thronged angelic door is wide." This reminds me of a recent dream:

I was exploring an old abandoned building and found in it a very large wooden rosary. Each bead was the size of a golf ball and had a single word engraved on it. I believe the words were those of the Lord’s Prayer. I found that the cross on the rosary was also a key which fit the lock of one of the doors in the old building. I left the rosary hanging from the keyhole, but an old priest came and told me not to, saying a key has no purpose if you just leave it in the keyhole.

After the dream, I counted the words in the Latin Pater Noster and found that there are exactly 50, corresponding perfectly to the five decades of the Rosary.

And to the angel of the church in Philadelphia write; These things saith he that is holy, he that is true, he that hath the key of David, he that openeth, and no man shutteth; and shutteth, and no man openeth; I know thy works: behold, I have set before thee an open door, and no man can shut it: for thou hast a little strength, and hast kept my word, and hast not denied my name (Rev. 3:7-8).

Incidentally, Abraham von Franckenberg's illustration of Guillaume Postel's interpretation of the "key of David" would later influence Lévi significantly, particularly in his idea of writing the word ROTA/TARO around the rim of a wheel. 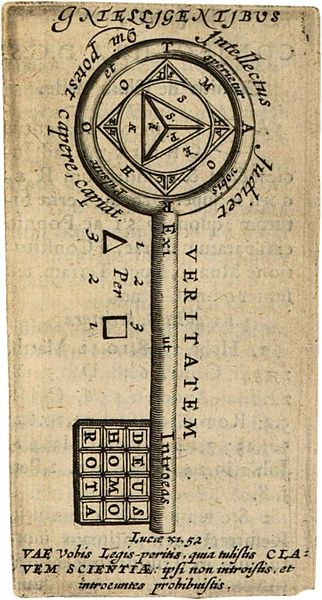 I feel like I should post this. I guess there's the white dragon creature descending from the red sky. That's my excuse.

It also reminds me of the time when a certain special someone with a certain special blog saved me from atheism. I was being hounded by my own evil, ahrimanic, unexamined metaphysical assumptions, unto despair, and I didn't even realise it! but then suddenly...

It was all very Romantic.

Just after reading your comment, I stopped at a 7-Eleven. The TV behind the counter played a trailer for the anime film Spirited Away, including a clip of a child clinging to the neck of a white dragon in flight. (Falkor’s name comes from the Japanese Fukuryu, modified in the English translation for obvious reasons.)

When I was six or seven, I saw a small part of The Neverending Story at school, not knowing what it was, and found it absolutely terrifying. There was a scene where a black wolf’s head was protruding from a mirror or sheet of ice or something, and it tried to attack a boy, who was covered with blood and was fending it off with a piece of broken glass or ice. That image haunted me for months and scared the bejesus out of me.

I didn’t know the name of the movie at the time, and for some reason I guessed it was probably Chariots of Fire. I even made up lyrics about chariots of fire for the theme music, which I still remember to this day.